I’ve recently finished building a self-contained underwater synth around the Shruthi-1. I crammed the following into an underwater case: a synth, NiMH battery pack, a circular resistance strip, an arduino board to convert voltage to MIDI commands, an mono amplifier board, and a speaker unit.

The goal is to build a device that can imitate clicks and whistles of a dolphin as well as moans and rumbles of a whale, something compact enough so I can swim / dive with the animals in the wild. Last year in Hawaii I was fortunate to have close encounters with different cetacean species so I’m hoping to be able to interact with them better this time around with a more sophisticate ‘vocal’ manner.

Here are a couple of pictures of the unit: 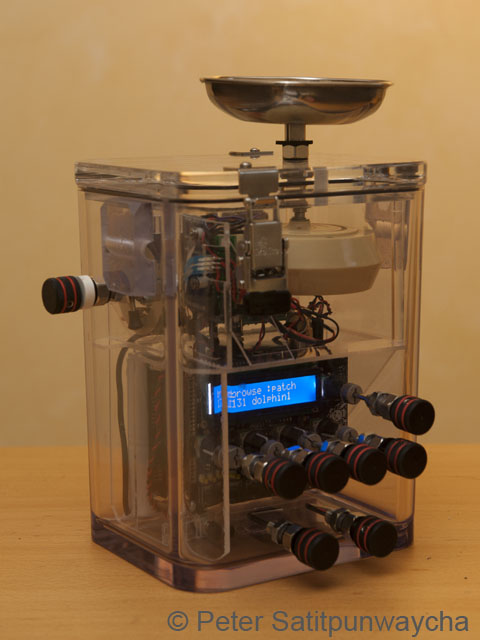 Sound design is still a work in progress. My trip (back to Hawaii) is 2 months away and I will be doing various tests and developing a ‘voice’ in the meantime.

that is simply amazing!

Very cool! So is the circular resistance strip controlling pitch? If so how are you controlling it underwater? I really like the control buttons, nice solution to that design ‘problem’.

Yes, the circular resistance strip controls the pitch, plus one of the knob that is assigned (in performance mode) to shifting octaves up and down (2> +2).

The black feedthrough knobs slides in and out as well as rotate, so by lifting and touching down on the strip I play a note. The 5 knobs on the Shruthi are controlled by the 5 corresponding feedthroughs, and the 6 buttons plus power switch are controlled by two at the bottom with bent stems that sweep through an arc when you turn it, each can reach and activate up to 3 switches.

Awesome! I’m even more curious about the sounds you have programmed into it!

From what I found, cetaceans have 2 sound production mechanisms - clicks and tones; one mainly for navigation and ‘seeing’, another for talking with one another (we think). Many times they do both simultaneously. I’ve dedicated one performance knob to LFO and one for Rate, so I can add in pulsing and pulse frequency to a given note. This way I can ‘switch’ between tones and pulses.

Frequency-wise, dolphins can generate and hear sounds 3-5 octaves beyond human hearing (140kHz+), whereas MIDI note #127 is still a bit below human limit (12.5 kHz). Cetaceans can process sound as well as we process light, so it may be as though some alien comes to earth and tries to communicate with humans using only orange and red crayons.

To get really high notes I would have had to get a non-MIDI, pure analog synth, but it would have much more complicated to implement.

I created a couple of patches based on what I’m guessing would be interesting to them - one with ‘vowels’ as a base sound, one with the wave tables to switch between waveforms quickly. The triangle and the sawtooth are also programmed so perhaps dolphins can hear and figure out harmonics. All of these with just a single oscillator to keep things simple for now.

wow! great work. i bet dolphins love that juicy vowel osc as much as i do…

Marvellous, hope Flipper Will love that! And the ‘object’ is really biautiful. What do you use as speaker?

The speaker is called ‘Rolen Star Audio Transducer’. It’s designed to be mounted onto an object to radiate the sound, in this case a sound post. You can buy it on ebay.

hmm there is a long tradition of this on the west coast. In the 70s someone out here used a serge on a sailboat to drive an underwater speaker. Alex morton began her whale work because as a student she had a summer job cataloguing Dr. Lilly’s dolphin library. Vancouver aquarium guy John Ford has done a lot of listening and tape play back with orca pods. The tricky part is driving low tones, very very low tones take a lot of power if you want them to travel hundreds of miles (they do). Bernie Krause used sound to lead a whale out of a California river system a long time ago, its covered in a chapter of wild sounds which has a great nature soundscape cd in the back.

This is exactly the kind of interspecies miscommunication I want to bypass by being in the water with the synth. Since most of the communication attempts in the past were by people on boats dropping speakers overboard and piping music, sounds out I’m sure dolphins & whales would mistaken boats as intelligent beings. And since the sound that boats generate are engine / propeller noises we ended up with this wonderful video.

the serge guy used a sailboat for that reason

by the way I am for what you are doing, don’t want to be misunderstood on that point. post the date you doing this if you want to entertain the trident guys : - ) A lot of undersea sound research was driven by the cold war, sorting out dolphins and whales from sub prop noise and various signatures, which begat Lilly and a lot of other ex-mil undersea scholars that opened up that soundscape. John Ford and Bernie Krause have both used predator warning recordings to try and move whales back out to open water. Saw John’s Nagra.

Tidal energy generators are introducing a whole new set of issues, not just acoustic, especially the turbines that commercial people are fond of dropping in rip tide areas up on the shelf. I favour the norwegian vertical pump because they generate power away from biologically dense areas which tend to be at undersea sandbars and areas of fast tidal motion. Less bio-disruption except the shadow footprint of the modular barges which all things considered I can live with. They are wave action dependent, not tidal, more consistent on that count as well. Navy types go way deeper with their turbines, less impact. Once saw touched the hull of the machine that did the Marianas Trench. That’s a long cold silent drop. They could have used a shruthi.

are you going to dive or just swim/snorkle at the surface?
i went scooba diving a few times and saw some dolfines under water once. it was amazing even without a shruthi. i think you will have a lot of fun.

I will be freediving (breath hold dive without air tank) and using the synth below 5m. From surface to 5m deep there is an acoustic noise layer that inhibits sounds from traveling very far. The synth’s low power will also be too easily drowned out by scuba bubbles or other noises, so I need all the advantages I can get.

I have had the privilege of swimming amongst wild dolphins in the past. Their way of life is speed, and humans are useless in the water, so it’s a big deal for them to slow down just so we could hang out with them. Am crossing fingers.

that sounds like a good plan.
i can`t wait to read your report and maybe see some video

I am back from Hawaii, where I tested the underwater synth to a degree of success.

I say ‘to a degree’ because although I learned a lot more about what sort of communication is possible with dolphins and whales, it turned out the synth didn’t make it any easier to interact with them. I had limited number of encounters (four) with wild dolphins roughly one hour each, and the learning curve was very steep. So I have to go back again and try next year.

Here are a few things I learned so far:

I made a short video of the testing and their positive response here. Enjoy!