The future of Eurorack

What is the future of Eurorack in these uncertain times?

Let’s consider the slow planned retirement of Mutable Instruments, the recent announcement of WMD closing and the paucity of new modules on the market over the past 3 years due largely to chip shortages and changing financial conditions?

Add to this, the explosion of Eurorack has flooded us with every conceivable utility, filter clone, etc… the low hanging fruit is gone from an expansion point of view.

Is there much room for innovative new products in Eurorack or has it already reached its pinnacle?

I have never really explored modern DAW’s, so I’d be interested if there are currently any innovative things there that haven’t yet found their way to Eurorack?

Any ideas or insights?

I don’t think that eurorack has hit a pinnacle, but I think there’s a few trends popping up recently, beyond people closing shop due to supply chain frustrations (among other things):

Where I think we’ll see eurorack improve or grow:

Keep in mind, I’m no industry expert by any means. I’ve just been here for a while and I read a lot

hi and thank you for your insightful analysis. But for me the most important thing is the music and what the technology allows to compose.

Stereo modules are in right now. I don’t feel like this has a ton of longevity from the standpoint of synthesis

I guess the question regarding stereo is where in the chain is is best or appropriate to introduce stereo processing: the beginning, middle or the end?

Yes, you are right. But I’m sorry I answered like that on this forum. This is more of a compositional issue than a technical issue. Maybe this is not the place to discuss this.
Anyway, thank you for the richness of the exchanges.

Compositionally speaking, logic, CMOS-style circuits, and patch programming have a tremendous amount of untapped and misunderstood potential. That ability to throw together patterns that can be anticipated but not thoroughly predicted, and then create ways to interrupt or interject, them is powerful and very useful, and attempts to improve access or performance of those approaches to the instrument could lead to a lot of interesting new musical ideas

Yes i think too.

I’m interested in where people think logic could be advanced beyond where it already stands in Eurorack?

Given that there are already modules which offer OR / NOR / AND / NAND / XOR / XNOR / MIN / MAX / flip flop / as well as various comparator functions and probability functions such as MI Branches (and some modules, eg: Plog, which allow you to switch between these logic types).

Aside from the way we personally implement logic in our patching, where do people think there is room to improve or innovate in logic modules?

Personally, my favourite is MI Branches in Latch mode.

I agree, once you create a stereo image it makes no sense to sum it back to mono.

There has been a move towards stereo for some time now and therefore quite a lot of options for stereo processing already exist. I’d be interested to find out if there are any new stereo potentials in Eurorack that aren’t already catered for?

The experience of Stereo is many things

But that is quite an old concept

In stereo EQ and mid side balance come into play. You can do parallel processing and other really interesting things that you cannot do with a mono source and mono processing

When left and right channels are different sounds derived from the same source (eg. using a stereo mic technique) and being processed independently by a stereo effect (Beads, Rainmaker, Magneto… any stereo FX) then you hear the stereo

This gives a richness of depth, quality and organic nature that approximates how your ears “perceive” stereo

Do some stereo micing - it’s both revealing and rewarding

What about quadraphonic? Is that a thing in Eurorack? It’s my understanding it’s big in Buchla, but I don’t know too much about that.

The discontinued Koma thing and the Erica Synths quad system

The KOMA Elektronik Poltergeist Analog Quadraphonic Audio Mixer / Panner / VCA is unlike any other eurorack module that has previously existed. Previously you would need multiple modules from various manufacturers to achieve something similar to what... 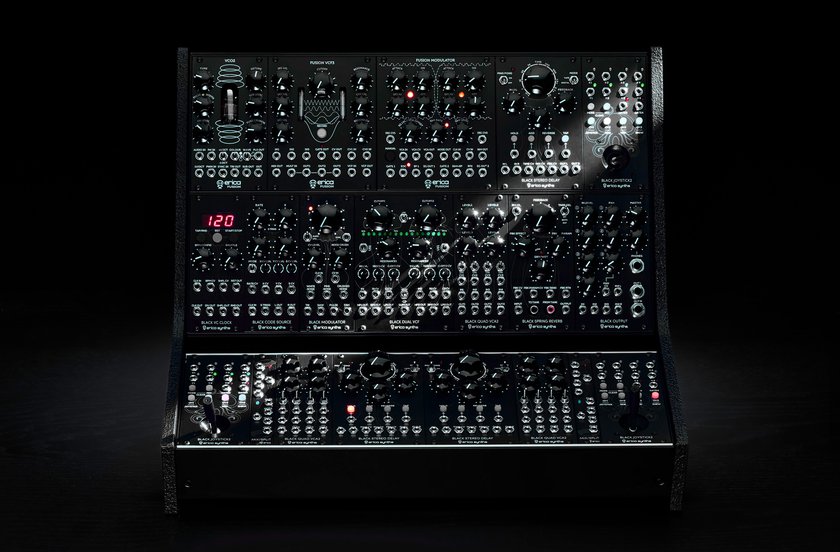 The Quadraphonic Surround Panner is expander row of modules for the Dada Noise System II.

I’m reminded of a band I saw once, can’t remember the name but they shared members with the mathrock band Cinemechanica. They would set up a guitar amp in each corner of a venue, drums in the center of the room, crowd like a doughnut around the drums. It was nuts.

I imagine something similar could be done with four PAs and a modularist or two in the center. The crowd in this hypothetical would also be able to see the front of the rigs which is cool.

A newer quadraphonic option in Eurorack is the Shakmat Aeolus line. The Aeolus Seeds provides mono-to-quad panning with modulation options, and the Aeolus Mixer mixes up to 3 quad and 2 stereo signals (or 5 stereo or mono signals) to quad and to 5.1.

And if you want basic synthesis operations applied to 4 signals, maybe take a look at the Doepfer “polyphonic” line of quad VCA, VCF, ADSR and oscillator, with common controls for all four channels.

Regarding the future of Eurorack, this brings up a good point: polyphony. While there are currently many options for processing polyphony in Eurorack, those options are either:

It would be nice to see an all in one polyphonic module similar to a polyphonic Plaits which has been discussed previously on this forum. It would be nice if it had in-built midi, filter, harmonic saturation, cv over parameters and individual outputs per voice.

Alternate firmware flashable modules definitely is a trend that is happening (and I like). The Versio, Legio and Starling platforms are three I can think of. This might slightly circumvent the chip issue as ‘new’ modules can be made using existing components.

In my view the really big players, like Doepfer, will continue as they are, given that they have history and a large selection of products.

As for the rest I don’t see much future for any company that just churns out more-of-the-same. The innovators will innovate, but sadly the prices that they have to charge for their wares will skyrocket.