this obviously had to be asked:
as you mention the possibility of leaving the zeners out for distorted resonance, would you consider it’s worth making them switchable?
i mean, with a 4 pole switch, not electronically.
or would using two discrete 2pole switches for the individual diode pairs lead to yet more variation (ok it probably would, but does that make sense?)

It’s not that hard to test that on a partially assembled board - populate the board without the Zeners, test it, then put one in place with the leads bent. Personally, I think they are magical, because you don’t have to worry about the resonance distorting when you push it up, and the resulting sine wave is very pure and can go very deep in the low-end, perfect for percussion sounds.

ok, so i’ll have to figure out how to do it with 1 switch!
thanks!

@rosch. Can you share this mod for noob people? ( with links between the switch and the zeners) I’m interested. Thanks in advance.
Marco

haha i haven’t done the mod yet. i’ll have a look tomorrow at the schematics again to be sure i don’t talk nonsense.

sorry, i just remembered this. it should even work with a single pole double throw on / off / on:
up: both diodes
middle position: none
down: only D4 on board

You need a variable zener for maximum possibilities

This variable Zener diode circuit acts like a Zener diode with a breakdown voltage adjustable in a vast domain. The current through the voltage divider R1

5v is already too much breakdown voltage for a shruthi filter. Maybe by lowering the value of the 4v7 diode you can achieve more suitable results though.

huh? i had no problems with the zeners as they are (installed, like in the build manual)

pichenettes: I have no idea how the “one side clipped, one side smooth” would sound

Well I suspect it would be rather like my SMR4 SDE ‘GERM’ flavour, which uses a single germanium diode to heavily clip one side of the waveform yet leave the other untouched. You can hear it in action here

Just added a couple of scope screenshots on my web site showing the difference in waveform and distortion levels between Olivier’s original FLAT and my GERM filter flavours: 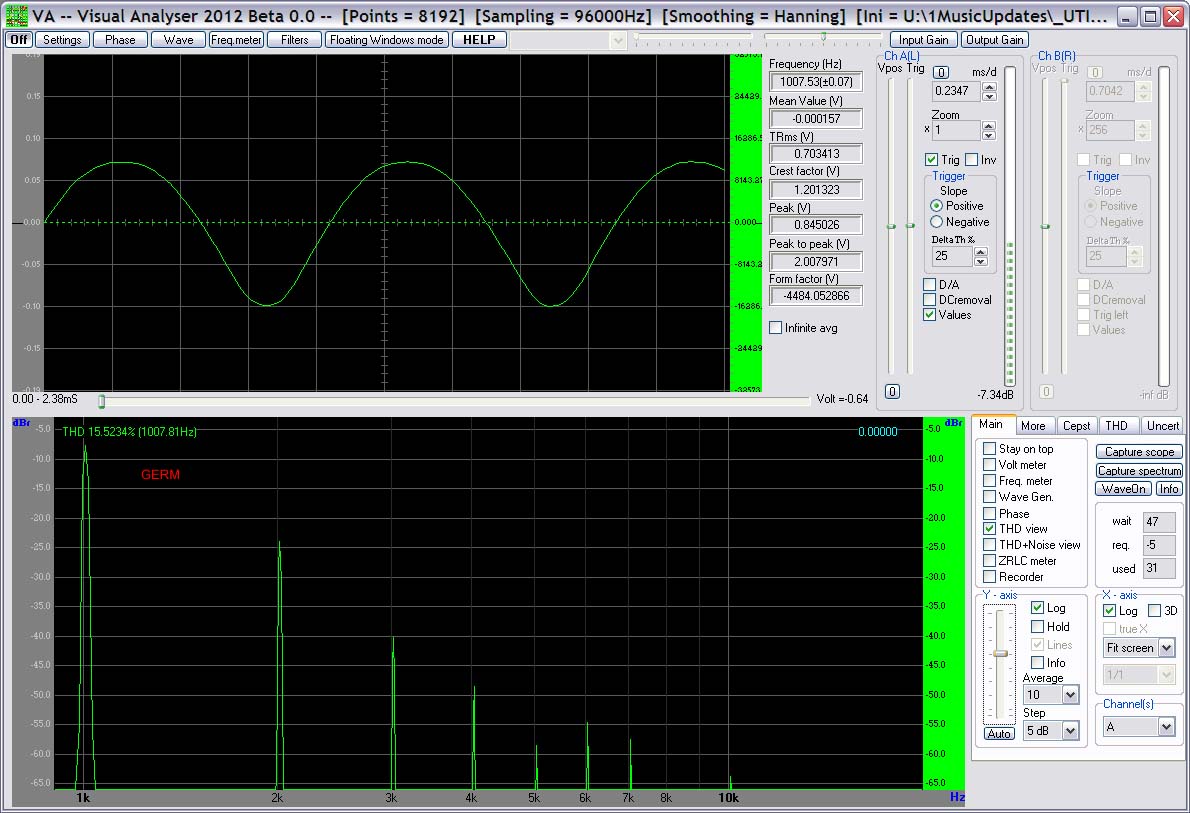 I would expect a speaker to be kicking out some air on the bass drums.

Yes. This is not a sensation related to your ear.
In the case of a filter self-resonance, I don’t think that the wind created by the sound is of any matter…

And as I said, manufacturers are not even consistent about the polarity of their systems. Some speakers have their membrane pushed when you apply a positive voltage between the plus and and the minus poles, some other do the contrary (I think JBC is like that, not sure though). The only use of the “+” and “-” conventions on speaker terminals are because you don’t want two paired speakers to go out of phase and get some phase cancellation. If you’re going to put some speakers of different brands into the same case, you have to beware about this (generally, you can verify the polarity by simply using a 9v battery).
Some power amplifiers and power amplifier chips also reverse the polarity of your signal… and you actually never know about that! Have you ever read a notice about your amplifier inverting the signal or not on your amplifier specs?
Unless you play it really loud or you put your hand close to your speaker, you can’t tell the difference

@MicMicMan That was exactly my point, and no I don’t know if this does matter in this specific case, and no I’ve never heard any difference between between ramp up and ramp down. But I still would imagine that the asymmetrics in a speaker membrane movement will have more of an effect on a asymmetric waveform, ie one side zener, than on a symmetric as with a ramp (I know this might be the correct semantics but I hope you get the meaning). But I could be wrong and I’m always willing to learn!

I really don’t think asymetrics in a speaker membrane movement are that important but in case there’s some asymmetry :

I can see one difference though : the polarity of the oscillators signal is consistent, so maybe with some oscillator settings, the interaction between a high resonance and the original sound would be slightly different if you put the diode on one side or the other. But that’s not related to your speaker membrane.