Hi!
I’m getting back eurorack and ended up with a Yarns and elements combo. I have some space left in my 84hp skiff. What do you think of marbles and stages as companions?

I want this as a stand-alone intrument. I have no intention to hook it up to a computer. I started out with a Yarns only setup because it’s both a sequencer and oscillator. It’s connected to a keyboard right now but I think I want to ditch that in the future.

How are you planning to play this? Attach a keyboard, sequence with something external?

@barksten From my perspective, Elements (and Rings) really unlock a ton of potential when you feed them live sounds. If I were you I wouldn’t order all at once but an Elements and an Ears (https://www.thonk.co.uk/shop/ears-special/) to start with. Get a Piezo and solder it to a cable for the external input of ears. Then some sort of LFO or envelope generator - I don’t have a stages but it looks great for the job, but maybe you should look at Tides, the Befaco Rampage or Makenoise Maths as well. All 3 do awesome superslow modulation.

We just have a plain attennuator (Thonk AT-AT-AT or Dreadbox Attenuator or similar) between our Audio Interface (RME) and the modular, so unless you need the headphone out you could use an attenuator, thus saving some space and instead add a multiple (Dreadbox WL Multiple or similar) - you’ll most probably need one to try all the nice modulation capabilities!

All just suggestions of course!

I have a keyboard for now but since I’m not a very good keyboard player I want some other sequencing, hence the marbles.
I want it to be self contained. No external sequencer.

To be clear; I have some space to fill. It’s a black hole (32hp) where marbles and stages are in the pic. I want to fill it with mutable instrumentes modules only.

I want it to be self contained. No external sequencer

Then why Yarns? I mean it can be a sequencer, but you might also think about something that gives you a bit more realtime control, or is more hands-on when it comes to programming sequences. Yarns is best with a keyboard I find.

I was starting with yarns and elements since i wanted to start as small as possible. I could play elements with my yarns/keyboard as a “non-modular” synth. Now I want to take the next step. I don’t want to get rid of yarns until I have filled the hole first.

I have elements + Marbles + Stages and they go great together.
I would also consider Tides

Just as expected: my rack grew pretty fast. https://cdn.modulargrid.net/img/racks/modulargrid_801351.jpg
I’m very happy with this setup so far but I’m missing some mixing and VCOs.
Now the question is if I should look for a Frames, Veils or Blinds.
I’ve previously owned frames but replaced it with Veils since I didn’t fully utilized it.
I’m also considering Warps (Crossfading) as a mixer (and so much more)

This is my perfekt (almost) all Mutable Instruments system. 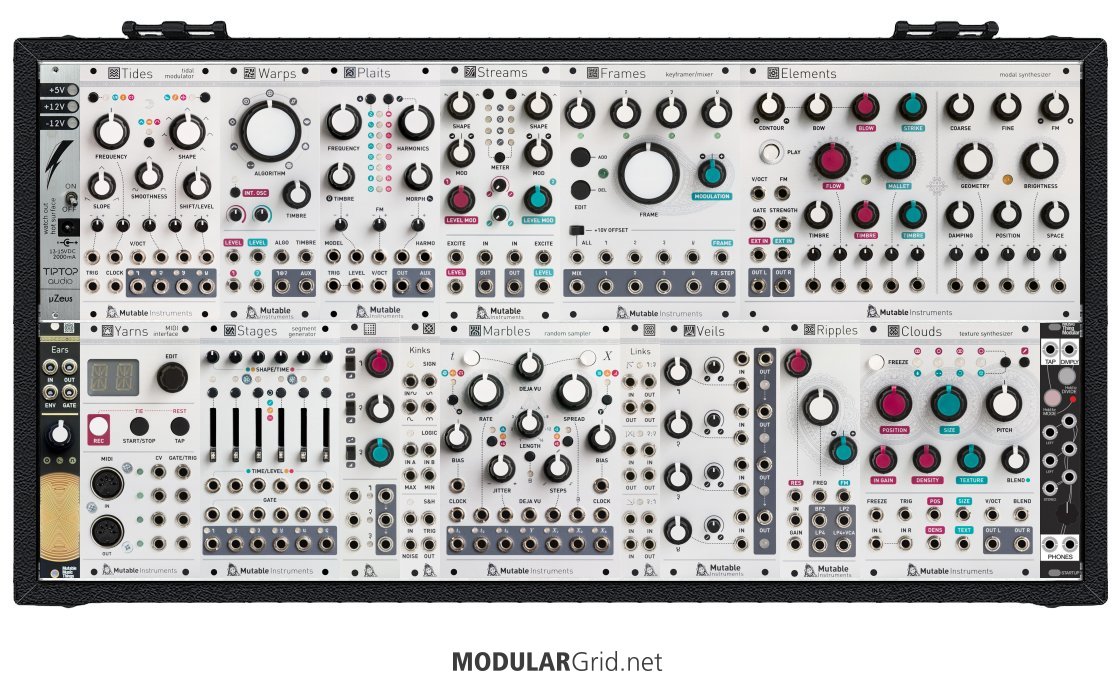 modulargrid_947306.jpg1115×683
I really doesn’t miss anything so far. The only bad thing about it is the ergonomics of a two row all MI case. Almost all jacks are concentrated at the bottom. This is my first none single row case so I’ve not given it so much thought before. Any ideas for improvement?
BizzyP June 27, 2019, 9:21pm #12

Hi, I’m a total beginner but let me share how well the Turing Machine II plus the Pulses expander has worked for me. Especially if generative music (letting random triggers + LFOs + minimal human supervision) interests you. The triggers work very well with MI digital instruments like inharmonic strings & granular noise. The DIY Turing Machine kit from Thank is easy to build.

Marbles is like a Turing Machine, with more features.