I have experienced some odd behavior with very slow clocks when dividing them down even further, but I don’t know if that is the case here. Could it just be that the t2 output was not steady so your LFO was not steady?

I’ll check it again tonight but i think it was steady. I use t2 to clock the clouds repeats with no issue,
Tonight i’ll try to trigger an hi hat so maybe i can notice if the tempo is inconsistent (the marbles jitter knob is fully CCW).

How slow is your t2 gate? Stock Stages has something like a 5 second max period for clock inputs for LFOs.

Omg my bad: i was providing the gate on the TIME/LIVEL input intead of feeding it on the gate input. such a noob mistake lol

Fwiw: it took me such a long time to realise that Stages LFO will sync to rhythms (eg marbles t1 & t3) as well as steady clock sources. It will even ‘catch up’ if the rhythm changes… give it a try!

This has got to be one of the most interesting easter eggs I’ve seen. Very cool!

Should the second-to-last ratio be 7.0?

And there should be two 8.0 at the end of the list to avoid checking for out of bound error in the interpolation code.

Thanks for responding! Figured there was probably a good reason.

Edit: Although actually, double-checking just to make sure I wasn’t completely crazy, I kind of like that harmonic in the right context.

Not sure if it was discussed here already but today I realized you can patch a shift register using step segments. You just need one segment per shift stage, they all receive the same clock as gates inputs, the first one gets the original sequence as a cv input, and the next ones get the cv output of the one before it. I was afraid it wouldn’t work but it did! Super happy with this, one other module I don’t have to buy thanks to Stages! 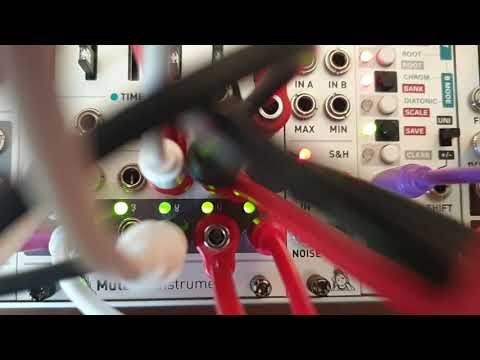 very nice! A similar shift register patch can be made using just hold segments, with the output of one feeding into the next level input. This method doesn’t require any clock, and allows for variable lengths between segments.

Nice! I will have to try that!

I bought Stages as an LFO/envelope generator but more and more I am starting to realize that it is also an amazing module to play with sequences, you can use it as a shift register, a sequential switch, a sample & hold, even a sequencer to add variations, couple it with a quantizer, a mixer and it’s incredible the variety you get! So much so that I bought two function generators just to relieve my Stages from its regular modulation duties and allow me to explore its more unconventional functions.

Hi, it’s he first time I’ve posted here I think, so apologies if I’m in the wrong part. the six pots at the top of my Stages module, which should control the slope, are not doing anything. I have upgraded the frimware but they are still doing nothing. Any thoughts?

I received a private message informing me that this problem has been solved. Case closed!

Could this damage my stages , and is it normal behaviour ?

Or is something wrong with my case maybe? The module works
impeccably and its fantastic.

Could this damage my stages , and is it normal behaviour ?

You are effectively connecting an output to an output (which it is generally accepted that you shouldn’t do). This is the ‘normal’ response of Stages when you connect an output to output. I believe the module is protected against this to prevent accidental damage.

I might be mistaken, but it looks more like connecting the shield of an output to an output; in many, many modular synths you will see a reaction when you touch the shield of one jack to another (connected) jack, but in most good designs there is no way to damage a module doing this. Proceed with patching!

I don’t know if it’s documented anywhere so if it helps:
I just found the way to make an AND gate:

here you go: AND logic gate in one segment

(maybe we need a thread with all the selfpatching hack we can do with Stages… and make a book out of it!)