Soldered up, plugged in, turned on... and nothing

Uhh… so yeah. Was a bit enthusiastic and didn’t have a multimeter at the time of completion, so just went for it - plugged it in with all IC’s in. Turned it on, and nothing at all happened. No smoke, no lights, no sounds.

When I had access to a multimeter, I took the IC’s out and metered across the points as per the guide. This was reading between 10 and 15v. Fluctuating. Not sure if that’s my shitty old multimeter or something crazy going on with the Shruti.

I am so stuck and sad! If anybody can help, I’ll buy them a beer =)

The pin in purple must be at +5V Just checked the voltages on all 3 pins of both IC1 and IC4, and they are all reading around 13 volts. Very odd. IC1 and 4 are the right way around, and everything else on the board looks as it should (according to the photos & guide).

I am so stuck, any other suggestions?

Also; uh… my multimeter provides a reading simply by touching one pin, and no ground. Is this normal!?

you should need a ground reference actually

I could post some photos of the board if that helps? I’ve been staring at it for so long now it has lost all meaning, and I can’t find any differences between mine, and the pics in the builders manual.

Anybody got any ideas?

The fact that you get 13V on the 3 pins looks terribly suspicious… It’s unlikely that there’s any shortcut (otherwise you would have noticed the heat and maybe some smoke), but how could it be that both GND and the supply voltage are at the same potential? Are you sure your meter is working properly?

The middle pin of IC4 is supposed to be grounded, so why does it also read as +13V? It does not make sense… Using the continuity checking mode, can you check that there’s no shortcut between GND and the supply ; and by looking at the PCB image, check that the PCB traces are ok (if you see a trace between two point, the meter should beep when the probes both touch those points, in continuity testing mode). I thought for a moment that maybe the PCB would be defective and it would be one massive chunk of copper - but i’ve never heard of such things happening, and if it were to happen the effects would have been more drastic and smelly.

have you checked your meter? if it shows voltage with just 1 tip connected there seems to be something wrong, maybe just the settings. make sure that black is connected to ground and red to the voltage you like to measure, with regard to ground. also: the voltage must be within your measuring range.
take a look at this little video, measuring a battery voltage. (of course i swapped + and -) this shows clearly that there’s no voltage displayed when only one tip is connected.

Right, it’s taken me ages for various reasons, but here are some photos of the assembly. I still haven’t had any luck with it, and haven’t been able to try another multimeter yet.

Can anybody see any oddities in these here photos? 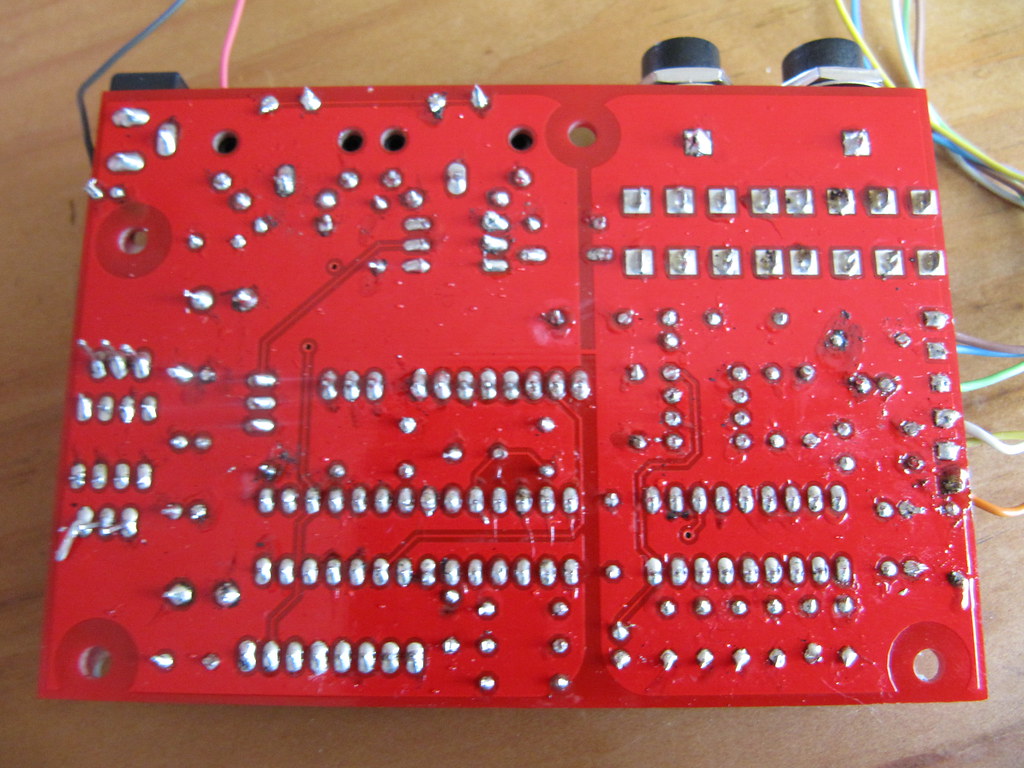 could it be a broken trace somewhere on the pcb? it sometimes happens - a fault in the pcb manufacturing…

right, i had an undervoltage in the positive rail of one of the 4051s. but this doesn’t sound like it. have you tried using a battery? maybe you supplied a too high voltage and fried the 7805? (wild guessing, but that stuff happens)

This is mainly @Olivier Gillet,

What happens if it was a faulty PCB? Can you send me another… and err… another load of components? It’d be nasty to unsolder them all and try to resolder them once they’ve been cut.

As far as parts placement goes, this looks OK. I would say it might be a damaged voltage regulator, but your multimeter readings made little sense. I think you should really get your hands on another meter, and look for shorts + check that nothing wrong happens at the regulators.

I pay an extra fee to have the PCBs factory-tested, so broken traces are not supposed to happen. A broken trace is more likely to give you null readings than readings above the expected values. Anyway, this is something that can be easily tested - take any pair of pads connected by a trace on those images, and check them with the “continuity” mode of your meter:

Have you also checked the polarity of your power supply?