First of all, I want to thank Olivier Gillet for his incredible Shruthi-1 hardware synth with its excellent SMR-4 MkII filter board, both of which I built about a month ago and which I love to bits for exploring new sounds. However, as a sound designer I’ve always been interested in pushing the boundaries, so having dusted off my electronic engineering skills, polished my soldering iron and retrieved my component boxes from the shed I’ve spent many spare hours over the last few weeks seeing what other sounds I could coax from the SMR4-MkII filter board.

The result of these hardware mods and additions is the Shruthi-1 SDE (Sound Designer Edition ;-)), with three new features:

1. First of all, I was green with envy when Olivier’s stunning 4-pole mission filter was released, so I cherry-picked my favourite six filter shapes from it and reverse-engineered them for the SMR-4 MKII: LP2, LP4 BP2, BP4, HP2, and Notch

2. Second, I explored the ‘wobble’ filter character from the 4-pole mission and implemented it as a variable Filter FM control going from none to serious filth.

3. Finally (and what took most time, energy and listening sessions) I extended the Mission/Polivoks ‘MS-20 distortion’ feature so that the SDE has six Filter Flavours that each react dynamically to incoming audio signals:
a) FLAT - the original squelchy SMR-4 MkII filter sound with low distortion (typically less than 0.3% with most Shruthi-1 patches).
b) SOFT - smooths the edge off any resonance and adds a tiny amount (~1%) of third harmonic distortion.
c) WARM adds a healthy 10% second harmonic distortion for a thicker, fatter sound.
d) GERM adds a massive 25% second harmonic distortion and kills the resonance using a classic Germanium diode limiter.
e) HARD adds a similar amount of distortion as GERM, but this time predominantly third harmonic and less second for a harder-edged sound with added sub-octaves.
f) EVIL takes things to the ultimate extreme, using hard limiting to add loads of extra harmonic content for a grungy overdrive.

ADDED 2ND JUNE 2012
4. I couldn’t resist adding yet another feature to the Shruthi-1 SDE after hearing the Polivoks in action: Output: Drive offers some subtle to serious overdrive and distortion options, along with a tweak to output level to make the SMR-4 MkII presets all run within -10dBV input sensitivity on your audio interfaces. On my setup some presets previously needed turning down or my interface switching to +4dBu to avoid digital clipping. Now everything runs nicely at -10dBV so you don’t have to watch the meters

ADDED 30TH MARCH 2013
5. I’ve been exploring some internal feedback/circuit bending mods, and the result is FEED, with a new set of demos on my Soundcloud page to demonstrate the possibilities.

ADDED 15TH JUNE 2013
6. The final mod is in place! ‘RES CMP’ is a three-way switch with the following settings:

The extra front panel controls in charge of all these new features are now two 6-way switches, two pots, one 3-way toggle switch. I’m well pleased with the results!

See what you think on my SOUNDCLOUD PAGE

I’m happy to pass on the circuit-bending modifications to anyone who’s interested in trying them, although I filled a small circuit board with the added components and the 6-way switches are tedious to solder up, so it’s not a beginner’s project

no conspiracys, just a typo. should have been shruthi

this laptop keyboards a bit temperamental…

The old shruti, the mk1. The mk2 is called Shruthi-1, different spelling

the smr4 mk1 was also spelled Shruthi-1, with H. i was wondering if he maybe means the old Shruti-1, without H (a different synthesizer)

Awesome, many thanks for these.

Was thinking of moving the old shruti into a pactec (x0xb0x) case and this will nicely fit in the other pots too 8) And will really perk up the srm1!

Oh, and if you buy a 6-way switch for the other half of the circuit, it will almost certainly be 2-pole/6-way, so you might as well make full use of it

@6581punk: It would be easier to wire in, but then the input level to the filter stages would be all over the place with the different flavours, whereas at the moment you get a roughly balanced output levels with distinctly different sounds from each, making it far easier to choose the most appropriate setting for a particular sound and make it easily reproduceable in the future.

The diodes offer soft limiting (the waveforms all have rounded tops), and the circuit is designed so that more input gain is added as the diodes clamp down more on the filter waveform, so the resulting peak output level stays roughly constant.

With a simple gain pot at the entry to the filter it would be easy to run all the filter stages into hard clipping, which is partly what Olivier redesigned the SMR-4 to avoid, as it gives a very harsh resonance.

If you do want hard clipping then I personally much prefer to whack up my Output: Drive mod on the output stage, since the filter resonance characteristics then remain intact.

Would a pot be easier for Pole 1? Call it the “Evil” level

My pleasure loderblast - if anyone is interested in more theoretical details on how the different flavours work let me know. The circuit looks really simple, but it took AGES (and three redesigns) before I managed to perfect the maximum variation from flavour to flavour

OK - here are the circuit details for the final (and arguably most interesting) of my SDE mods.

a) remove R13 (33k) and replace with two flying leads long enough to reach the new switch (if you’ve already added the filter fm mod, the ‘top’ of your pot will already be connected to pin 1 of IC2A, and you can extend this wire to the flavour switch - let’s name it MIXOUT, and label the other flying lead connected to pin2 of IC2A as MIXIN. (this part of the mod tweaks the gain for each of the six flavours so they emerge at about the same level -without it they will be HUGELY different!)

b) A second pair of flying leads needs to be connected to IC7A pins 2 and 1, but again, if you’ve implemented the Filter Shapes mod both wires will already be connected, namely CAP and LP1 (this part of the mod is what alters the resonance characteristics). 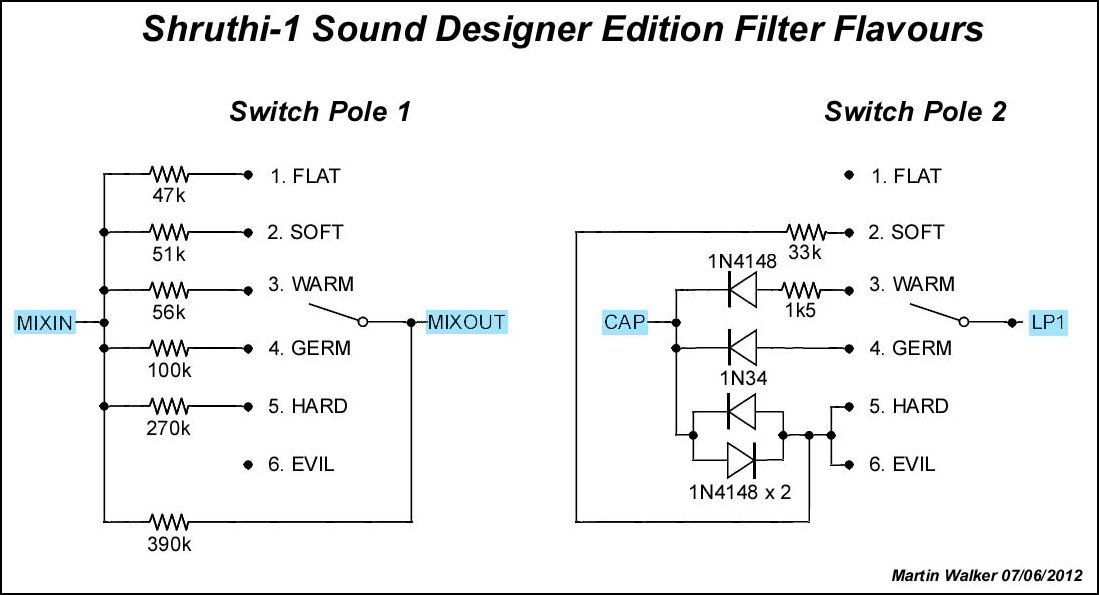 nice. thanks a lot.

i still have my very first smr-4 board, i fucked up somehow and gave up after a while and got a new one (maybe you remember the thread about that.). my soldering and electronics skills have improved a lot since then and i am confident about resurrecting it soon.
i will do the mods with it, when i get it to work.

OK - just had a look at the MkI and all my mods should work fine on that as far as I can see:

2. Variable Filter FM - connect the 10k linear pot between pin 14 of IC3D and GND, with its slider connected by the additional 47k resistor to the FM hack point marked J6.

3. Filter Flavours - @defenestration: I’ve already done lots of work on the ‘diodes and whatnot’ to provide six distinctly different flavours for the MkII that should again work fine on the MkI (although as pichenettes mentions, internal levels are higher on this earlier version, so I can’t guaranteee that the relative flavour levels will remain the same), and will add my schematic here over the next day or two.

4. Variable Output Drive - remove R10 on the MkI and replace with a 10k resistor (instead of the 12k for the MkII) in series with the 1M linear pot.

defenestration, I have the MK1 and would be interested to see what you come up with.

I removed them because the SMR4 mkII resonance “tames itself” rather nicely. On the SMR4, the signal levels were such that the resonance signal could clip - hence the trimmer, and the option to add diodes to tame it further - though the pads were not located at the most useful spot of the signal chain.

great stuff - going to pull my SMR-4 Mk1 out of it’s case in a month or so for a couple other mods, so might try to compare schematics and adapt a couple of the simpler ones for the mk1 board

one thing I notice that is absent from the mk2 board are the pads for waveshaping the resonance sine of the filter, I still plan to stick some diodes and whatnot in there and see what happens

Nice. Thanks for the Details Martin!

a) Carefully remove the existing C32 (1nf) from its position between pins 1 and 2 of IC7A and save it for later.
b) Carefully solder a wire link in place of (or across) the existing 10k resistor R6.
c) remove the jumper currently plugged into the 2/4 Poles ‘switch’
d) Solder flying leads to the following points, which connect to my circuit as follows: 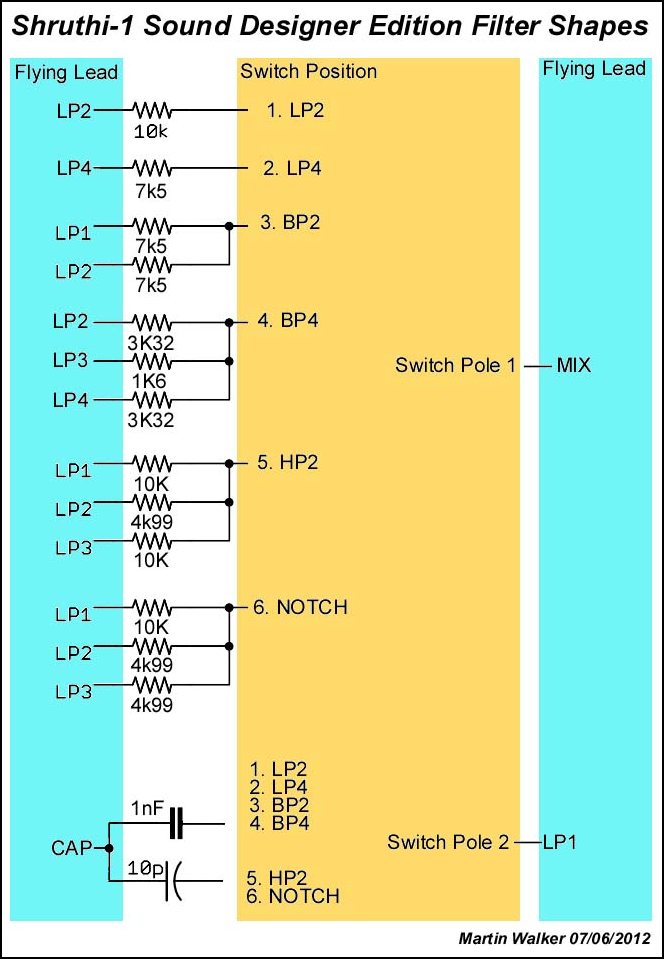 HOW TO USE : with the Filter FM pot at its minimum position your sounds will be exactly the same as before, but as you turn it up you’ll hear the squelchy wobble feedback increasing. The setting Olivier chose for his 4-pole mission Wobble is about 1/3 up on the pot, but I chose to allow much more extreme settings.

a) remove R4 (18k) and replace with two flying leads long enough to reach the new control.
b) solder a third flying lead to a nearby GND point and then twist all three flying leads together.
c) At the pot, solder your new GND lead to the metal body of the pot (with the Drive pot at maximum position the gain of this stage increases by about 50 times, so unless you ground the pot metalwork you’ll probably hear hum when your fingers come near it ;))
d) Solder the flying lead connected to pin 6 of IC2B to the bottom (minimum) end of the new pot.
e) Solder the final flying lead connected to pin 7 of IC2B to the 12k resistor and the other end of that in turn to the slider of the new pot.

Here’s a photo of the correctly wired pot (the rubber sleeve normally covers the resistor): 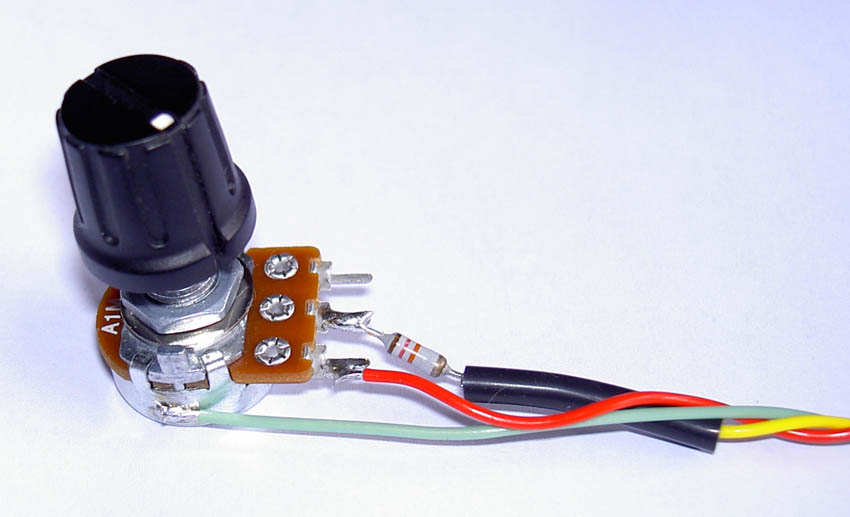 HOW TO USE: You will also need to wire in a 10k linear output level pot as shown in Olivier’s SMR-4 MkII circuit schematic. Leave the new Output Drive pot at its minimum position for ‘normal’ output level, then as you increase the new Output Drive control as much as you need to get the required drive/distortion, simultaneously turn the standard output level pot down to compensate for the increased level (this is far easier to do than to describe).

So sorry for the extended wait - I wanted to get some other things finished off first (one of which is of particular interest to Olivier), so that’s my excuse

I also couldn’t resist adding yet another feature to the Shruthi-1 SDE after hearing the Polivoks in action:

4. Output: Drive for some subtle to serious overdrive and distortion options, along with a tweak to output level to make the SMR-4 MkII presets all run within -10dBV input sensitivity on your audio interfaces. On my setup some presets previously needed turning down or my interface switching to +4dBu to avoid digital clipping. Now everything runs nicely at -10dBV so you don’t have to watch the meters

I’ve just posted a new Soundcloud demo of Output Drive to add to the demos of the other three mods.
All Soundcloud listens and feedback gratefully received, especially if you like filth