I’m not sure how I feel about this or how much of an improvement this is over the original Shruthi. thoughts? 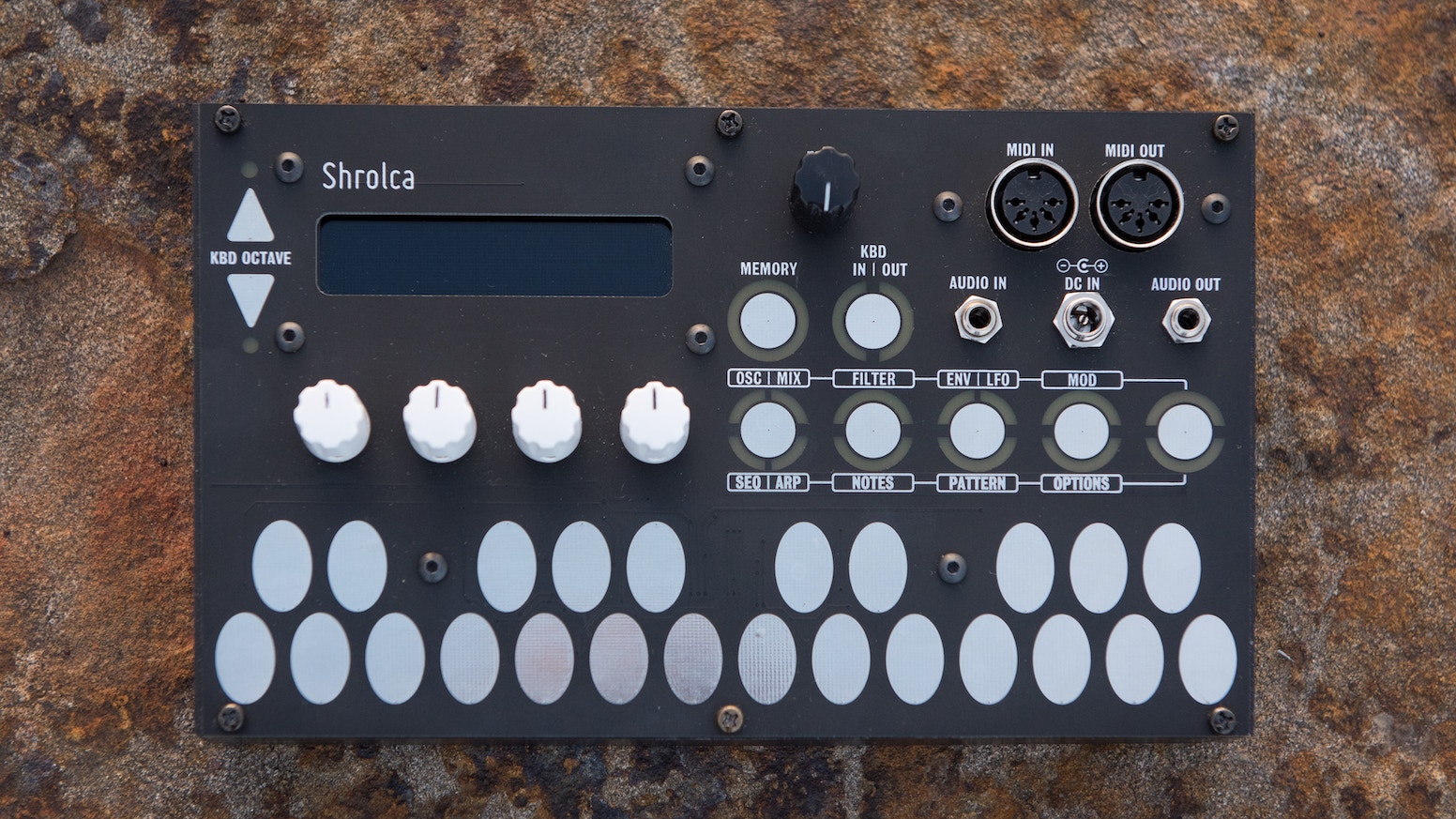 i kinda like the form factor (except for the placement of the power socket, which i find a little strange).

i wonder why they went for the ladder filter, though. why not 4pm or good old smr?

It seems pretty neat. But I read its remade using surface mount parts. Nothing wrong with those of course, but im thinking this likely means filter boards are no longer exchangeable…?

no, i wouldn’t expect exchangeable filter boards. i think they would have mentioned those…

Intriguing, and the completist in me wants one, just because it’s a Shruthi. On the other hand, there are some things I’m not a fan of, aesthetically, with this design.

I particularly dislike the way the MIDI sockets stick out at the top. I’d rather they’d stuck them on the back as minijacks, and provided breakout converter cables.

On the plus side, I like the way the buttons are illuminated, and the touch keyboard looks nice. They’ve missed a trick if it isn’t pressure-sensitive, though.

They say on the Kickstarter site that they will release the design files when the KickStarter units ship later this year. However, it says that it uses a 24db/oct ladder filter. Is that Andre Laska’s TubeOhm filter? If so, does Andre know about this? I only ask because, afaik, Andre didn’t release his design under an open-source license. All the details and the schematic are published, but that’s not the same as being released under an open-source license. I wonder if the Kickstarter designers have mistakenly assumed that the CC-BY-SA license under which Olivier released his Shruthi filter designs also applies to the TubeOhm design? Or maybe they’ve done a deal with Andre of TubeOhm? Or maybe it’s their own re-implementation of a ladder filter?

hello all! i will try and answer all of your questions, and if you have any more please post them.

no exchanging filters on this design, we wanted to make it affordable and nice so the only way to do the machined box the way we wanted to was to make it as thin as possible which means everything is on one board mounted under the faceplate. we did however put the filter in an isolated area so when we release the files someone could easily put whatever filter they want there.

there is no pressure/velocity on the keyboard. we mostly put it on there for transposing and programming the sequencer or maybe taking it with your band that has synth sounds on a couple of songs and just tapping out some simple notes. its definitely not there as a serious performance interface.

we decided to use “real” midi jacks because some companies use different pinouts on their 1/8" midi jacks and also because we wanted it to be simpler to hookup with other gear without special cables. i am not a fan of proprietary stuff so i tried to keep that to a minimum on the design.

OK, so it’s a de novo ladder filter re-implementation, rather than a licensed copy of Andre Laska’s design. Andre’s ladder filter is really nice, though, and incorporates a wicked Filter FM feedback facility that really sets it apart.

Did you make any changes to the firmware? specifically perhaps, new patches that would suit the sound of a ladder filter as oppose to the SMR4 rolandish filter the were designed around?

I actually thought a lot about designing something similar. I’m happy i can let those thoughts go and just wait for the files

part of the funds of the KS will go towards patch design using our prototypes while we have the full units manufactured. thank you for asking this question as it reminded me to include this in the update!

correct… filter boards are no longer exchangeable in this design, but we did put the filter in a totally separate place and it will be easy for us or anyone else to put a filter there or do a diy project where you have headers to replace the filter.

ladder filter is small and has a lot of duplicate parts which helped in form factor and keeping cost down.

the name… definitely seems to be a bit of a divider. this is my favorite response so far

its definitely not there as a serious performance interface.

I think the volca keys keyboard is also usable. Is this better or worse?
How did you implement the keyboard? Is it integrated in the Shruthi firmware?

if you are good with the volca keyboard you will most likely be fine with this one. i personally like our keyboard better due to the separation of white and black keys, but i am gonna be a bit biased

Actually, I have to say that making a Shruthi in a Volca package makes sense to me! Is the sequencer the same as on the “classic” shruthi, or has it been tweaked to be more Volca like? One thing I love about the Volcas is how fluid the process of creating and tweaking sequences is on them.