Hi, does my shruthi-1 have a serial number? Where I can find it?
Thanks
www.acadballa.com

It doesn’t have a serial number.

it’s got a firmware version number, and a digital and a filter board revision number.
multiply all those, add your date of birth, and substract the date of purchase - and you get your shruthi’s serial number.

You could mark your driver’s license no. in some tiny, obscure area. There’s no serial no. per se.

Maybe you could tell us why you would need that for?

Well When I got robbed, and lost my midibox octasid I was really sad i had no serial number for them to put in the pawn shop database to get an alert if someone tried to sell it.

‘pawn shop database alert’?
what country has a central database of stolen goods that pawn shops have to check their stuff with?

With DIY a serial number does not really make sense… You would need separate numbers for each board because occasionally modules get exchanged. So you would have to engrave them on the PCB’s, and then a separate one on the case. I have been thinking about it for the Trusted Builders thing (for example to avoid getting a build returned under warranty where my good board has been replaced by a faulty one) but it keeps getting complicated to the point where I think it’s just not worth the trouble.

I don’t think people who let there synths especially made for them will start exchanging parts…
Only trusted builder trouble i have so far is i have an Ambika sitting here for a month waiting for a payment. I gave him till tomorrow otherwise i will put it up for sale on the forum.

@shiftr, dat ain’t cool. I’m always worried that will happen so I’ve been requesting an initial payment to cover the parts then the remainder when its done. It’s been working out great and helps weed out the ones on the fence.

But I agree, if someone gets a synth built for them and wants to add something, chances are they will have the person that did the build do it. Thankfully the only issue I’ve had was a 1054 died on a build I did.

@shiftr That’s really bad. In the MI sphere of the world I’ve grown to expect nothing less than perfect gentlemen agreements

Well pawn shops here have to collect information on serial numbers, and if you bring in a police report with the serial on it, then the police can use that to make them give it back to you and get the pawner in trouble.

This is one reason why I customize everything I own and take photos of it. Many of my musical instruments, bicycles, motorcycle and most other things are modified to some extent.

I don’t do the initial payment thing. It could still happen that someone doesn’t come up with the rest of the payment and then it would be difficult to sell it. Also if for some reason something comes up and i can’t finish the build in time i don’t have someones money burning in my pocket. The worst thing that can happen the way i do it now is that i keep stuck with an Ambika :D.

I think the MI sphere it’s marvelous and everybody here is to trust. But the people who go for the trusted builders are not usually members of this forum. Also the person whom i build an Ambika for is probably a gentleman too but is trying to make a living as a musician and spent too much of his money on partying.

my XT has a serial number 10/10…okay not really a SN but I got some form of numbers…and a very nice Shruthi.

The serial number is from the manufacturer so with diy you should have your own serial numbers. I think i’m working on number MI 000012 now.

On my basses I use(d) to get the serial number engraved on the neck plate and I’d stamp it on the neck and body on an out of sight spot. 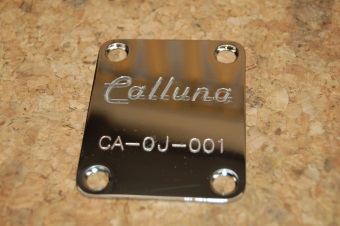 The serial number is two letters for my company, two digits for the year, and then a sequence number. If I apply the same numbering to my MI builds the 4PM which I completed yesterday would be CA-0M-003. Too bad the Shruthi doesn’t have room for a neck plate.