Update:
After listening really really carefully I managed to hear samples being played… So this means it is recording well, but the level is so low that the led indicator do not catch any signal. turning the rec level pot does not change anything. I guess I was right about them being trashed? Now for a replacement, it looks quite hard to find.

Here is what the internet is telling me is an equivalent.

Since you do get scratches when you move the pot, that is a good thing. That would match with the description of a 50K audio taper pot. Since I know this I can now narrow down the problem components.

As you can see, the top 18 pins on the ribbon cable are reserved for these pots. it also looks like there is a nice piece of copper in the PCB for grounding purposes. On the back of the second board there are three traces that look like they are the ones the audio signal will use. What components are attached to these traces? Can I get some better pictures of this area around the top of the ribbon connector on the front and back? I need to trace them all out like a maze. I believe that the audio output is fine. It is the input I am worried about.

Replacement pots looks good, but the mounting system is not the same, the one I need has this two fixing pins around it.
It’s hard to tell where the traces are going, some to resistors and to caps I think. Here are better picture (I guess we are looking for the op-amp?): 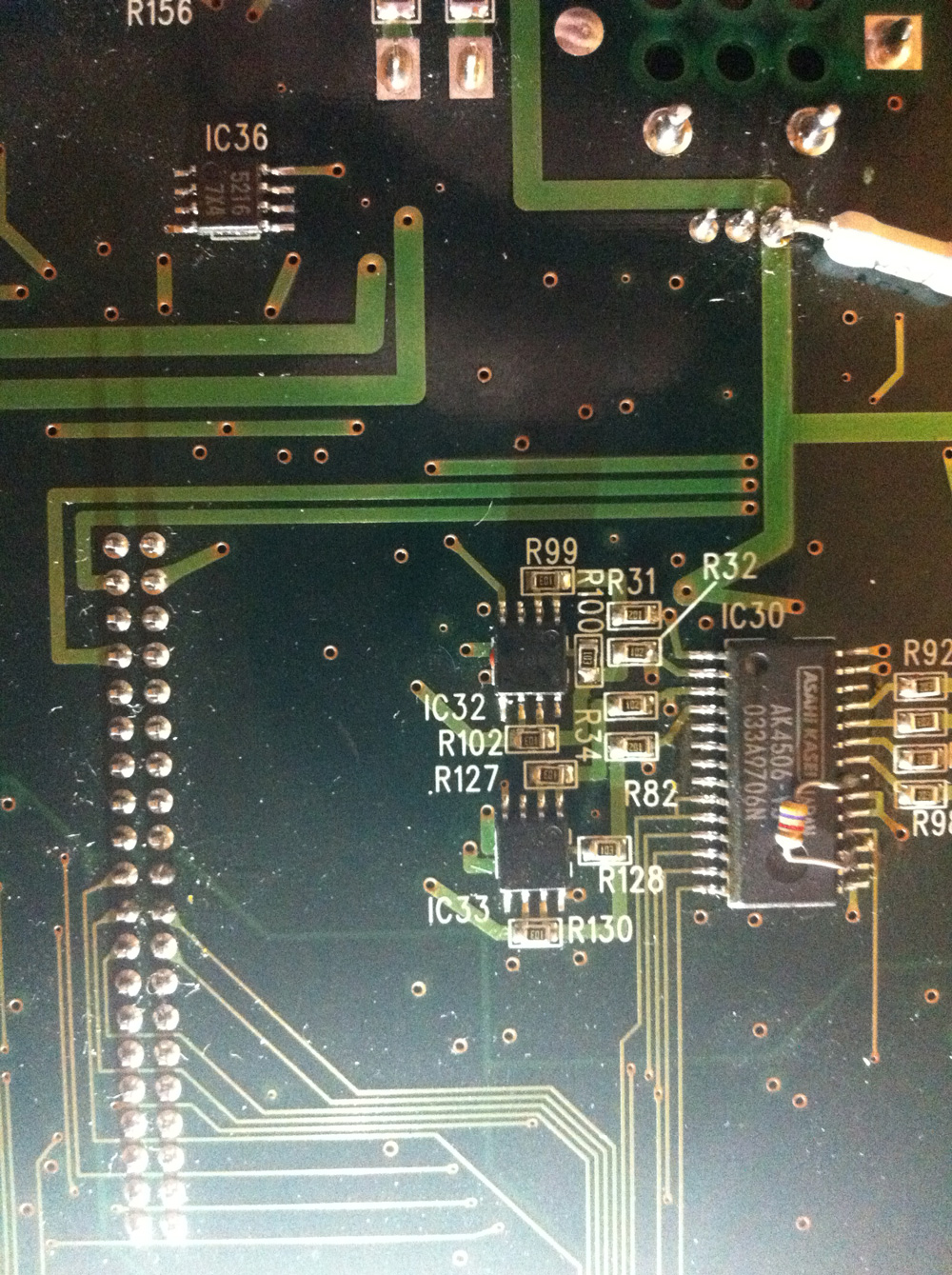 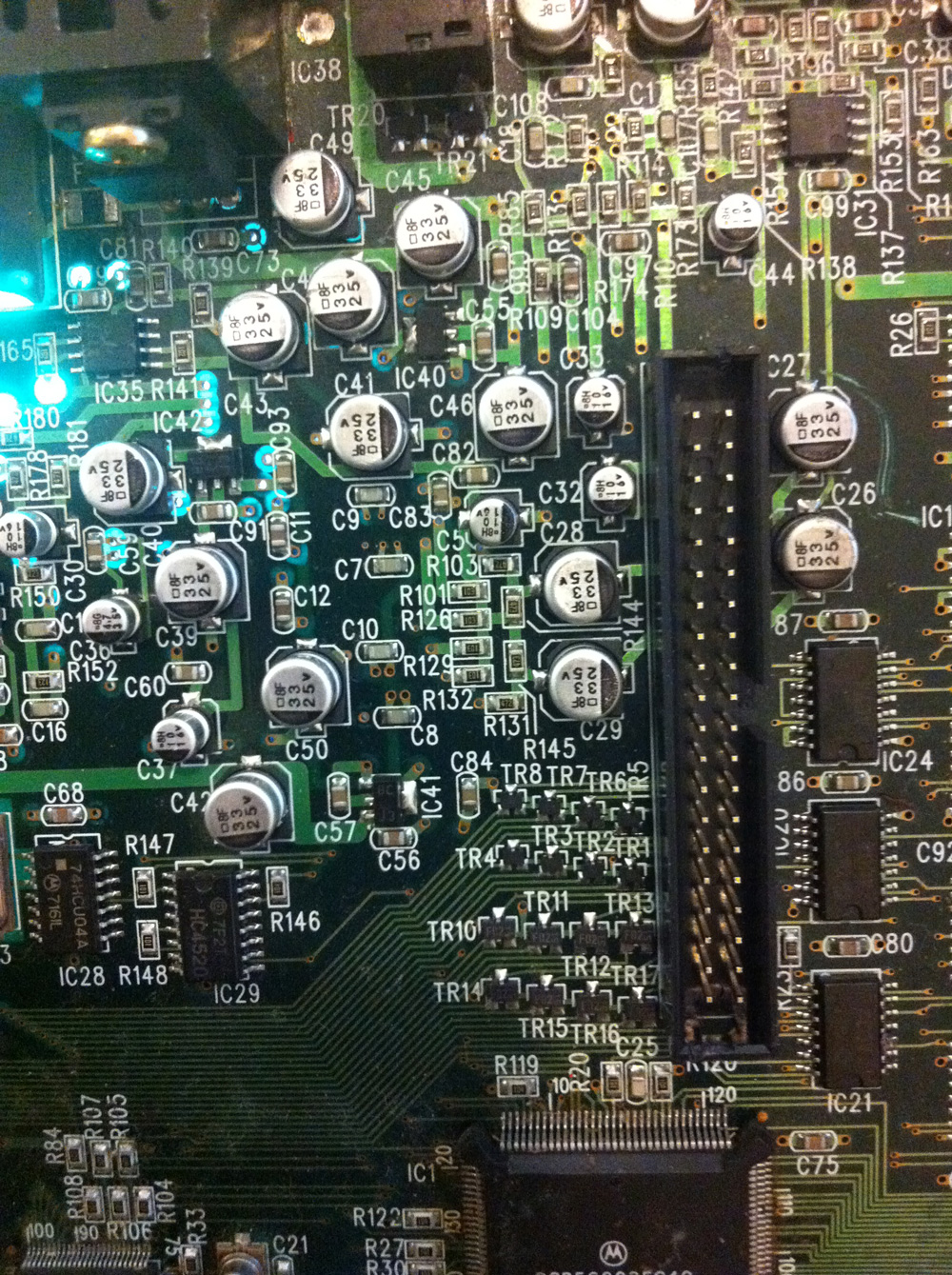 > looking for the op-amp?

Yes, exactly. If there were an easy and safe way to probe each op-amp, this really wouldn’t be too hard.

Definitely don’t go buying those pots I linked to. I was just posting them so you could see that it is still possible to get similarish components. I did notice that the mounting was all wrong.

Ok, I can’t really recognize where these opamps are, there are some really really tiny ICs around.
But as they are SMT, if this is the problem, I’m wondering how they can be replaced, I do not have the tools nor the skills to solder SMT components…

Well, then let’s just see if you can “fix” the pots by using them! Basically give them a lot of rotations, and if there is something sticky in them try warming them up. This is where I would recommend leaving your PCB under a black container in the sun for a little while, but it is winter. So low heat setting on a hair dryer for a minute or two? You do not want to damage the components, but as this board will need 35 buttons replaced, you can be a bit less careful. Just disconnect the second board first.

About the pots, I tried to spray them with some contact cleaner but no luck.

>contact cleaner but no luck.
With something like a sugary, hoppy beverage that never works in my experience. Heat and movement? Sometimes.

Ok, so three op-amps. Good. Which one is for the input? The input traces would be below the top ten pins (5 pairs).

It looks like there is an IC under the white RCA inputs. Does that IC connect to any of those pins?

SMT soldering doesn’t really need anything special. Chips can be removed with enamelled wire, slip under the pins and secure the one end of the wire, then heat each pin and pull on the wire so it lifts the leg off the board.

Clean up the pads with wick, then apply flux with flux pen. Position the chip, tack the leg at each corner. Tin the iron and touch each leg, the flux will cause solder to be sucked onto the legs and make the joint.

@6581punk
Thanks for that, if needed then I’ll know what I need to do.

@audiohoarder
I need to mention that when I play something with the headphones plugged into the phone plug, I have direct monitoring no matter if I play with the volume pot. Following the phone plug trace, it goes to the RCA connectors without going to any op-amps I think.

There are ICs labeled TR under the RCA connectors and not that far another op-amp (IC36) labelled 5216. Maybe that’s nothing but a close IC has red thing under, maybe just glue or epoxy? 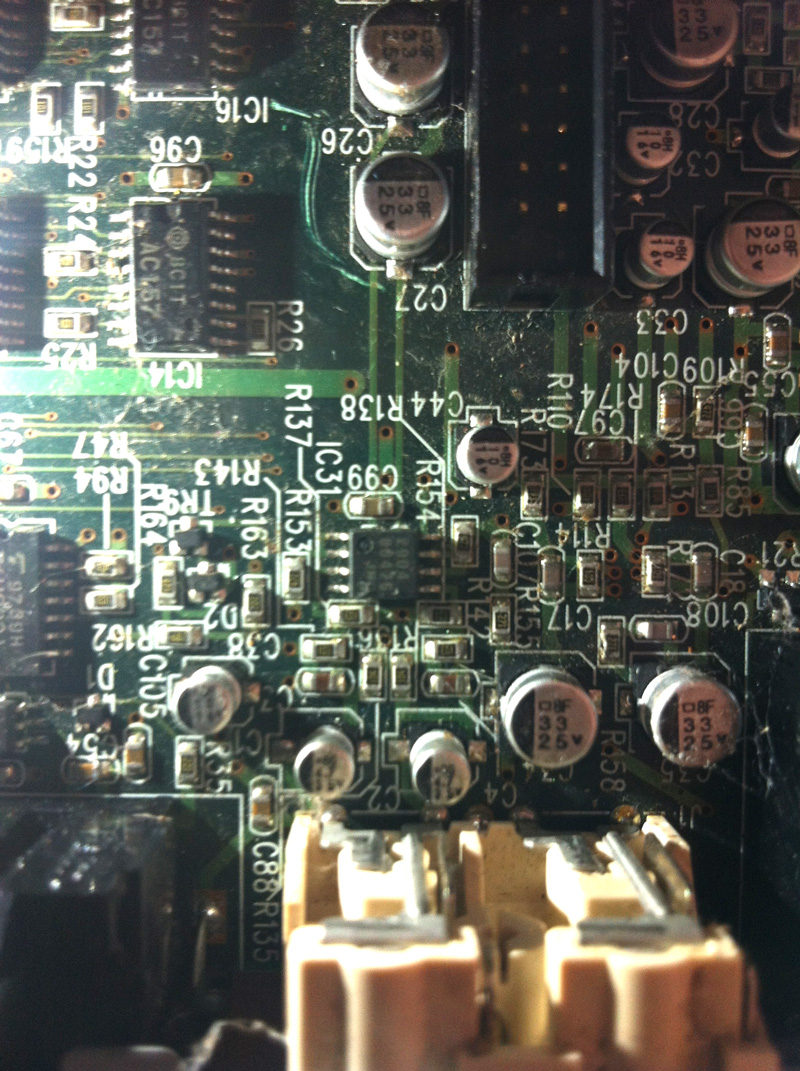 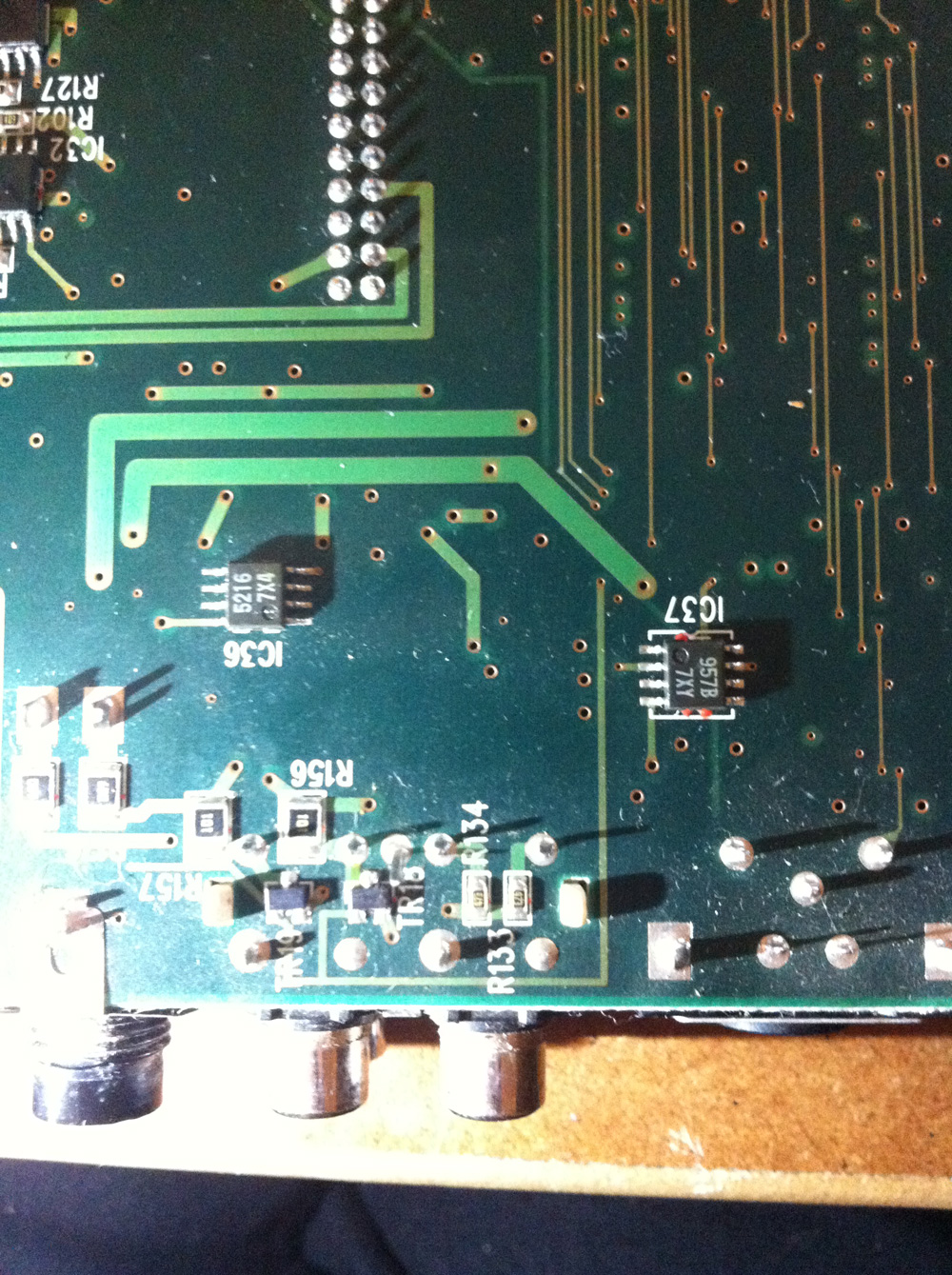 Let me think about this some more.

In the mean time, how are you connecting something to the RCA jacks? Are you using a converter of some kind? It could be that is the issue.

No problem man! I’m trying to study the pcb too.
I’m connecting my sound source through a rca-jack. I tried with another cable before but no luck.

There can either be a problem with the signal before t gets to the synth or after. Do you have an amp you can plug your RCA connection into to confirm that it is loud instead of quiet? I am only asking as sometimes RCA connections can be “loose” and not make decent contact. This is especially true for some converters. RCA to phono springs to mind where there is a male RCA directly connected to a male phono.
Also, try just using the mono(white) RCA input only.

I can confirm that the problem do not comes from the cable or anywhere before the sampler.
funny thing is, even unpowered, the sampler act as a bridge between the sound source connected on the input and the headphones connected on the phone output.
When powered on, the sound is cut and after booting procedure sound is restored, but with a small compression. I guess this comes from the op-amps being active.

beside that, sound is still almost non existent and the two pots do not have any influence on the sampling level or playback level.

Hmm… Ok, so short the record button, then short any of the pad/bank buttons (1-16) then see if you can hear the audio loudly. That is the only two step process that is needed for sampling. Have you tried that now that you know how to short the buttons?

Yes I tried that, as I said, sampling works, but the playback of the samples is incredibly silent, I can hear what recorded but almost no signal.
I desoldered both pots and sprayed more contact cleaner, I will resolder them and report back.

Sorry for the double checking, but I know that you would rather not replace the ICs. Do let me know if that works.

One thing to check while the pot are out is if you get the same sampling results. Yes, I know that you should get silence, but you may get a faint signal like on the headphone monitor.

Thanks, I tried, but still no signal. Without the pots soldered I do not even have the slightest playback like a had before.

Ok, sanity check, can you momentarily put a resistor of proper value to get a “loud” sound out of both pot areas? That will once and for all decide if the pots or the ICs are the problem. Well, as long as you use good resistors.