Once again, I call for the help of this community to enlighten me on some aspect of a repair I am trying to start today.
The forum has been under some changes lately, so I hope it is still fine for me to post this here (Olivier, tell me if you are ok with this sort of rambling being on the Mi forum). If not, please point me where I could post this (The Mi forum and community is the only one I am familiar with.

So a friend of mine came with a broken Yamaha RS7000 that needs some reapair (and quite quick as it would be for Ceephax acid crew’s use during a gig).

Problem:
-On power on, the unit does not react, the screen backlight is on and some lines appears but fades away. No leds lit, no reaction from buttons.

Things done so far:
-I have checked the power supply board, everything is fine, the correct voltages are supplied to the right connectors.

Things I have noticed and that I think could be the problem:
-On the main board, almost all the caps labeled L2p 47 16V seems to have some sort of leakage under them.(check pictures below)
-Why is it the case that only these value have this problem?
-These caps are all linked to big and critical IC’s, so I believe that could explain the no answer from the machine as they are note operating well?

Things I would need advice on:
I am confident in trying to replace the bad caps myself although this would be my first time with SMD (these particular caps seems nonetheless not that small, as the pads they are connected to).
-Some 47uF caps are labeled L2p, but others 47uF are labeled differently (I9) and the latter do not seem damaged, so what does this L2p means? Might explain why all the L2p caps are bad.
-Do you have any advice in replacing those? Should they be only 16V too? Can I replace these with thru hole caps?

And las but not least, is it worth it? DO you thin these bad caps could have done any unrepairable damages to the crucial ICs?

Thanks a lot in advance for your time!

Pictures of the caps: 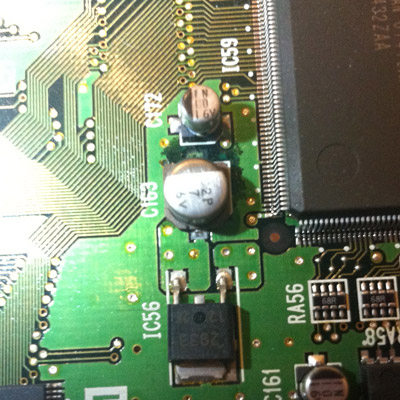 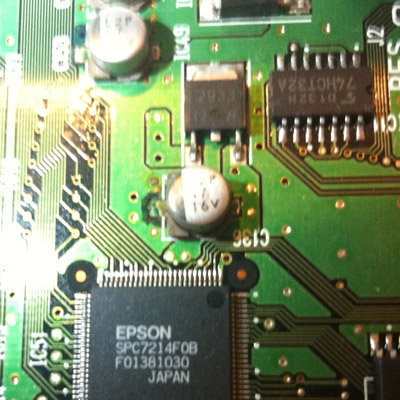 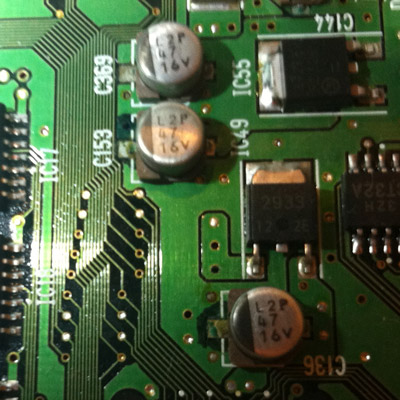 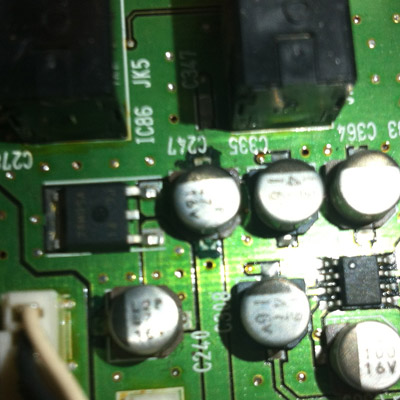 1.) Try to get the circuit diagrams
2.) Try to measure the capacitors using a multimeter (I use Reichelt UT 139C) to see whether they are dead or not.
3.) Search for replacement parts with the same values/properties (Mouser)
4.) Think how you would desolder them. Not sure from the pictures if it is possible at all using a normal soldering iron (could you touch the pads?)! One way is to use those cheap (35 Euro) hot air reflow soldering stations from evilbay.
…

thanks for the advices!

You can twist them with pliers and then remove the rest of the base. But probably not a good idea

Japanese capacitors tend to last, some of the cheaper ones used a stolen electrolyte formula that was incorrect and so caps in the late 90s and early 00s failed. A case of failed industrial espionage.

Crazy story here with the electrolyte formula, if it is true, it could explain all the same caps failed at once, on the part list in the service manual, they are all with the same reference (electrolyte formula) although they are some other caps that seem perfectly fine and are of the same value.

Wow, crazy!
Now that I look at this picture from the wiki article, I feel like the same leaking of rubber seal might have occured on the power supply board (see pictures).
I did not mention it because the material was not like eletrolitic leak at all, it feels rubery when touched, I thought it was glue or epoxy…
Strangely enought, they are probably working anyway as the power supply board delivers the right voltages… 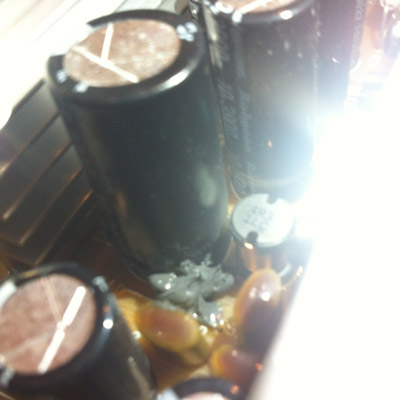 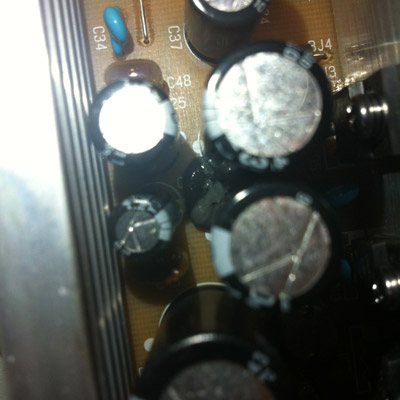 I’m feelin quit discouraged as I do not have any way of knowing which cap is bad, so far, visually, I noticed that all caps of the same label (V4143000) seems to have leaked.
But what if there are more? Like all of them…

Just because the multimeter is measureing the right voltage, doesn’t mean its okay. Did you look at the ripple with a scope?

Unfortunately I have no scope available here…
How can I do otherwise?

Instability is what happens when the caps go. My experience of this was with a PC motherboard, the caps leaked and it became very crashy as a result.

Also, sometimes capacitors are glued to stop them vibrating (more an issue for musical devices, Sonos speakers for instance).

Alright, I’ll get the rights caps tomorrow and roll up my sleeve, I see at least 8 to 10 caps to replace.
For the gray rubbery stuff, it feels totally random, more like a leak rather than a drop of glue layed on purpose.

“…How should I measure the capacitors? I have a simple multimeter ? I thought measuring caps on a circuit is almost impossible…”

You need a multimeter wich can measure capacitance. Not all multimeters have that feature. There are some cheap ones available like UNI-T 139C (search UT 139C at Reichelt). Of course it depends on the circuit and is not always possible. You find online capacitor calculators in the net where you can calculate the expected capacitance in serial and parallel circuits (2200uF + 2200uF in series won’t result in 4400uF!). For an explanation see here.

You could also try to desolder one leg for thru hole parts.

@Paulus – “don’t fix what isn’t broken” is the rule of thumb when doing electronic repairs, so don’t worry about PSU caps – if the PSU voltages are correct, you’re good to go. If those PSU caps are degrading, you’ll hear hum, but the unit will work. The gray stuff is silicon compound commonly used to glue larger caps in PSU units.

Replacing SMD caps is pretty straightforward: heat the most exposed pad with thin flat soldering gun using braids to suck in the solder. If that does not work, add flux and leaded solder, then use braids again. Leaded solder has lower melting temperature, it mixes with the original unleaded one, allowing braids to work better. Repeat for the other side. If the cap does not come off, you may need to use ChipQuik or heat gun. Clean pads with braids after the cap is removed.

Don’t rock or crash the cap as the article suggests – there is a very high risk of lifting the pads if you do this. Lifted or broken pads will be difficult and messy to repair.

I highly recommend to practice by removing a few similar sized SMD caps from a scrap electronic board before you try to do it on RS7000 board – this helps immensely.

Great advices. I desoldered carefully one of the PSU cap to test it and have a close look at it. It was indeed glue, so they are fine. That’s good news.

I’ll try to practice on a scrap SMD board that I have lying around first, great idea!
I could not finde SMD caps, so I am aiming at replacing them with thru hole caps, the pads seem big enough to do so.

Would you advise me not to use my desoldering pump with SMD?

@Paulus – i don’t see how spring loaded or Hakko 808/FR300 desoldering guns could help desoldering SMD caps: you cannot get the nozzle close enough to the pad to maintain vacuum.

Ok guys so here is an update:

I replaced all 9 74uf smd caps on the mainboard as they all seemed to have leaked or in the process of leaking.
It was quite a sweaty job, not so clean, the pads were mostly corroded and the solder was hard to apply, but it worked!
So the unit seems to be 100% responsive, it makes music!

But now I am eager to know how this could have happened, if it can happen again or if it is because of a bad cap serie?
Or could it have another explanation?

The important thing to know is that all 9 capacitors that were defective all were part of a regulator circuits linked to big ICs. All the same value. Could the failure of those have been provoked by another component failing?

I noticed on the board, next to the power supply connectors, two 470uf SMD caps that seems slightly deformed on the top. Not really bulged, but the print on it seems a tiny bit stretched. See pictures below.

What do you guys think, should I replace those too for the sake of being sure? or should I stick to the fact that the unit is now fully working?

Thanks for your input! 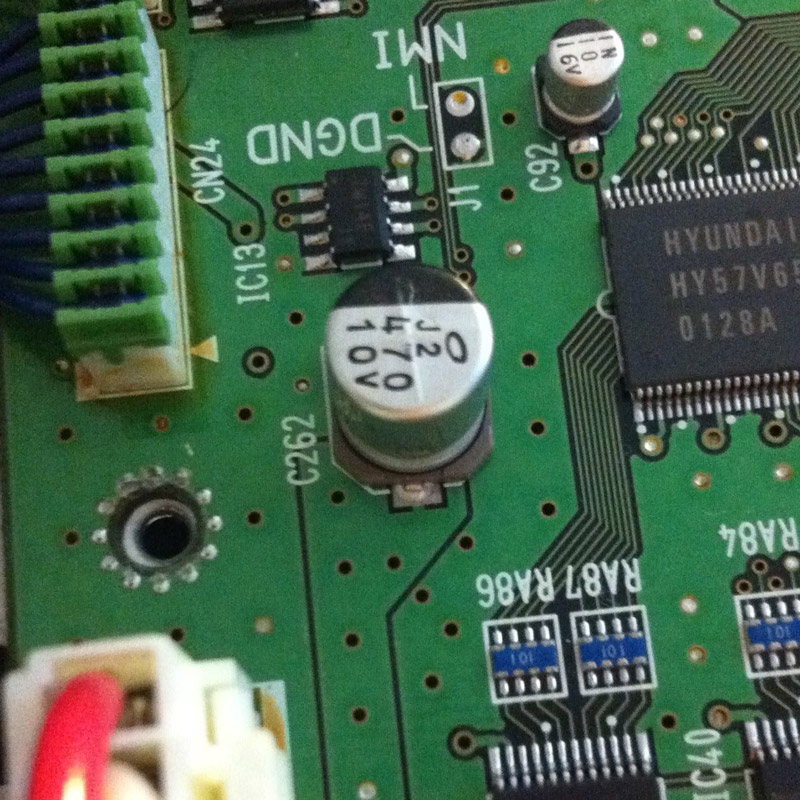 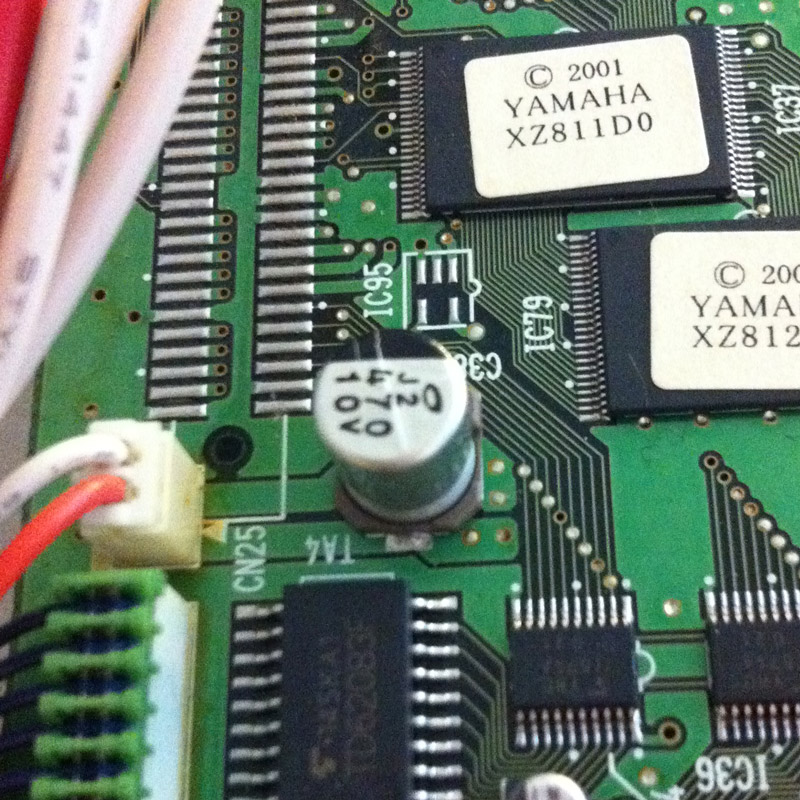 Don’t touch something which is not broken…

@I think i’ll stick to this advice, although some caps I replaced did not have any sign of leakage, that until I removed them and saw that they were starting to underneath…
But yes, the unit is working, I am just concerned (and curious) about the reason behind this capacitor leakage plague and I would like to be sure it won’t happen again.
especially in a near future, this unit I am repairing will be for a guest in a gig happening in two weeks.
just don’t want the unit to fry or defect on stage…

Hm, you can’t be sure that this will not happen again…maybe it would be possible to check every cap for manufacturer and type and try to investigate if there could be issues coming with them. But that would be an epic effort, so i guess you’ll have to live with that. But all in all Yamaha is one of the better manufacturers of the 80ties/90ties, so my educated guess is that you’re good to go.

good or bad manufacture, the capacitor plague got everybody so you should remove all of the same type of cap if they are leaking… You can see how much the case bulges on the ones that are bad. Ones that are fine will likely stay fine since they would have popped by now if there was a problem