Recommendations for a mobile recorder

I’d like to get a mobile recorder with integrated microphone to capture environmental sounds outside to be used for sampling. I like this to be as tiny and portable as possible. Mono would be fine, but I don’t think there’s anything on the market with a single microphone. The Zoom H1 looks like the most obvious option, but maybe I’m overlooking something?

I own the h1 and it’s a great portable recorder if you want something very affordable and really small. The case is made out of flimsy plastic though, not very sturdy in my experience, but the quality of the mic is great for the price and it runs on just one AA battery.

Yeah, most of the very small and inexpensive ones look a bit dinky. I’m also considering the Sony PCM-M10 which is about the same size.

It’s a shame none of these recorders comes with a digital audio output; would have been nice to be able to sample into my MPC-1000 directly without having to go through a computer.

I also have a Zoom H1 for 5 or 6 years. I love that it’s so cheap and plasticy … Because of that i always have it floating somewhere in my bag.I’m also not afraid to leave it somewhere unguarded for a while to make longer recordings. I’ve used it in all kind of situations like rain and dropped it many times. It’s still working ok. It’s very lightweight so it will survive being dropped.
Sound quality is good enough for most applications. Especially if you are going to use the recordings as raw material to be processed later.
The problem with most of these kind of recorders is handling sound. You have to hold it very still if you are going to record sounds while holding it. Every very small movement of a finger will be very loud in the recording.
Also when using it outside even the slightest breeze of wind will sound like thunder.
I have a very small ‘dead cat’ that does wonders for that though. Thats what my son uses: 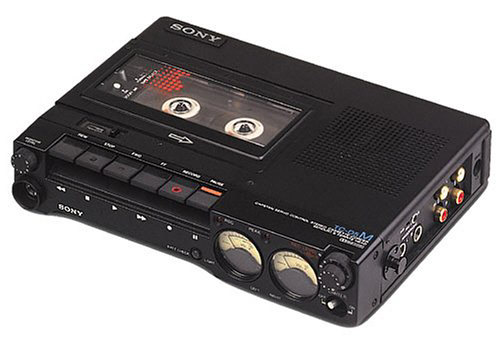 Ok, its not exactly tiny and it obviously has no digital audio out but its top notch when it comes to style, isn’t it?

@fcd72 Yes, it is. You snatched that just ahead of me, remember?

Yeah baby! You should really look for one, it warms everything sound wise…… and it makes you look like a serious pro not like a kid with a Nintendo

@shiftr Whatever I get, I’m certainly going to include a dead cat with my order.

According to the sound on sound review, “the M10 doesn’t seem to suffer from the usual ear‑splitting bumps that handling can feed into the mics, and in that respect it’s significantly better than other products I’ve tried”. Don’t know if this is in comparison to the Zoom, but it does sound like a good thing.

That sounds nice about the Sony! The handling noise is one of the biggest problems when using these kind of recorders. I guess you’ll get a lot more quality with the sony. But it’s also twice the price.

@fcd72 The Art of Noise used to use a Pro Walkman for field recording, apparently. Funnily enough, they used to call the recording itself, rather than the act of feeding the recorded sound into the Fairlight ‘sampling’. I guess the usage of the word has changed since those early days…

I can confirm that handling and moving air are a problem with the H1… the dead cat solves the problem partially. I learned to hold very still when recording or to use a mic stand

The H1 uses directional mics in an X/Y pattern which helps record a more impressive and wider-sounding stereo image. The downside however is that directional mics are apparently more succeptible to picking up handling noise.

The M10 uses omnidirectional mics. Don’t ask me why exactly, but this type of mic tends to pick up less handling noise.

I’m also using Zoom H1. FYI: line in distorts somewhat easily if it’s fed with too hot signal. Also I’m not 100% sure about the quality of 3.5mm line in plug. Works but sometimes one channel of missing. Maybe the plug, maybe the jack. Then those handling noises… Otherwise quite nice.

@frspp Of course that’s another option and something that I’ll very likely do; it just would have been nice to be able to use the digital input on the MPC.

Yep the line in really has too much gain, I need to keep mine on 13 (max is 100) to get a decent audio when feeding in the signal from a normal desktop mixer.
@frspp: I never had problems with channels missing, which version do you have? I have a first gen H1.

Decided to order the Sony PCM-M10 after looking at pretty much all the sub-€250 recorder currently on the market.

There are certainly cheaper options as well as options with more features (a lot of newer recorders include a tuner, effects, overdubbing, and limited multitrack recording), but the size, build quality, apparently low handling noise, and the more forgiving omnidirectional built-in microphones better fit my needs.

I would probably get something else if I played in a band or if I were into concert recording, but for the ambient/environment recording and “feed the sampler” stuff I’m planning to use it for it certainly seems to be the best option.

@rumpelfilter I bought it few years ago and it came with orginal H1 firmware. Problem might also be in cables, they’re diy ones with older jacks.
I’m running it usually sub-10 when using the line in so that levels never go above -12 to avoid the distortion. In some cases that’s not enough, and then pad cable might do it. Like this.