as Im starting to get more into the soundscapes as opposed to the melodies, I need some effects units, I have used the YM shruthi as a delay and its cool, but Id like to play it too.

ANyone have any recommendations for some good effects units? I know EHX has a cool small stone phaser that sounds like I want, but are there any DIY options?

There are DIY plans out there for phase shifters but they are fairly complicated, at least for me. I went with a Maxon stereo phase shifter and Maxon stereo chorus. Both are expensive but the phase shifter sounded fairly close to a Mutron, which I can’t really afford. These are dedicated full time to the Rhodes.

The dumbest part is that I had a Mutron phasor (the first version) many years ago and gave it away when it stopped working. Now I could probably fix it, probably just a short or blown caps. Argh!

DIY
since you like the sound of the PT2399, Taylor’s Echo Base PCB 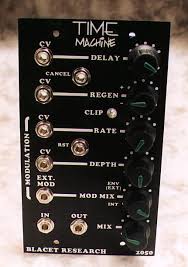 Prepare for a new obsession

This is recommended by Jim Kirk

I like the Mutron Biphase clone from Papareil, but it’s a complex project, so you have to be experienced and dedicated before attempting one. BYOC sounds more sensible

@Jojjelito, that’s the one I was thinking of. I would love to try that some day.

The Tau Pipe Phaser from Jurgen Haible is another over the top design.

Yup! That evolved out of his Arp Quadra phaser cloning. Like all his projects it’s very well thought out, the audio quality etc is top notch. Truly the work of a master. RIP.

+2 for Taylor’s Echo Base

I’ve built 1 and have another in my backlog.

Since you are looking for multiple effects, you might wanna look at kits based on the Spin Semi FV-1 chip. Schrab has advertised it in this thread. I got one thanks to a Polish friend but I haven’t built it yet though… It has several built-in effects and you can program your own…

you may want to visit MadBean Pedals

@dubtoms does this mean you can not order this mentioned kit without a Polish friend ?

Is there anybody around here who could help me to order one ?

There is another kit sold by Elektor but it is really expensive, however you can buy the pcb and chips separately and source the rest of the components, see here

The FV-1 seems to have awesome potential as a DIY hardware multi effect but I wish there was a more unified collection of information about it. At least as someone with minimal programming knowledge it seems somewhat difficult to understand. It would be really great to be able to create and share effects using a system like that, though.

Thanks for all the tips and links gang, ill take a look , been busy acquiring synths this week, got a Matrix 1000 and a poly 800 , just need some effects to flesh the sounds out a tad