I just wondered what everyone thinks about the new version of Reaktor. In particular, the modular “Blocks”. I was impressed with the overall sound, but when I looked into to the user library, I was very surprised.

One guy has made a library of Blocks that pretty much recreates any type of modular set up you can think of.

I am now interested if anyone here has been able to connect Reaktor 6 blocks to their physical modular. If so, this library could potentially replace every single hardware CV modulation as I prefer to use my computer as the main sequencer anyway. Even if you don’t go that far, just being able to digitally reach for that “one more envelope” is sure to be very useful for those who don’t want to add any more physical space to their rack.

I give the new version of Reaktor very high marks so far. However, if you want a new high-quality audio oscillator or filter that can sound like hardware, it will probably have to come from the main Native Instruments library. Here’s to hoping they keep it up-to-date and fresh.

I have Reaktor 6, its a really superb bit of software and I was already very happy with Reaktor 5

And yeah that Hetrick chap is very clever. He makes plugins for Reason also, so he’s quite handy with code for sure.

You certainly can hook up Reaktor to your modular. Theres a thread or 2 about it over on Muffwiggler someplace. But heres a vid to get you started:

I’ve not tried this myself, as I generally keep software separate from hardware for the most part.

While im here… Did you get the Blocks 1.1 update that came out recently? Some very cool stuff was added to that!

@Luap: I really just got into it over the weekend, so yes I do have the latest update installed.

The winning block in that is the XYS sequencer. It is very fun to play with, and not something I have in hardware. I think that the LPG is a bit underwhelming as I am used to the Pittsburgh Modular LPG. However, it does get the job done, and is a good alternative to the amp.

I suppose that I should also give a shout out to this other superb library of blocks I came across today.

It has an oscillator called Microwave that has some wavetables that are either very similar to the Shruthi or the same ones, so that is an unexpected but great addition. It also has a CEM3379 emulation calibrated to its use in the Ensoniq ESQ or SQ80. If you are in to that kind of sound, it is very accurate.

I do let my hardware and software mix with each other, but I have never warmed up to something like Machine witch is just a controller that generates nothing without a computer. However, NI would be a bit silly to not make a Machine-like computer to modular adapter similar to the Expert Sleepers gear for use with Blocks.

> being able to digitally reach for that “one more envelope”

requires a dc-coupled audio interface. And that’s probably going to destroy the idea of a virtual-modular-to-eurorack-coupling for almost 99% of the users.

NI would be clever to release a matching audio interface as a eurorack module.

Well my NI has a spdif out at least, so there is two kinds of adapters i can stick on it for the functionality.

@TheSlowGrowth: I agree, but I think NI would be smart to make such an interface a separate box that does not rely on the user having a dedicated euro setup.

It crossed my mind pretty soon after getting Reaktor 6 that an NI eurocrack module would be ideal. IE, an interface for Reaktor 6 to euro (and back). Seems quite feasible…?

@audiohoarder the only euro gear I own is anushri, a microbrute and a naked peaks, so probably a little farther down the percentile.

I’ve been trying to find a cheaper way to get into adding virtual euromodules via the pc, and a es-3 plus the $99 reaktor upgrade for me is probably the “cheapest” way.

Yeah, if you need modulations, Reaktor 6 has that in spades. I thought that I would have to make some of the ones I like, trapezoid generator for example, but they are already made in user libraries. Just make sure to get the two user libraries I have linked to in this thread, and you will be more than set.

I would also like to point out that a graphic designer for NI has been releasing fantastic GUI kits for your own custom panels. Yes, there are soft touch Rogan knobs in those.

@Luap: Yep, I would be surprised if they never make an interface/Reaktor bundle. I am sure they did that with a version of Kontakt or Komplete.

Oooh you almost get virtual knobs in the right color! 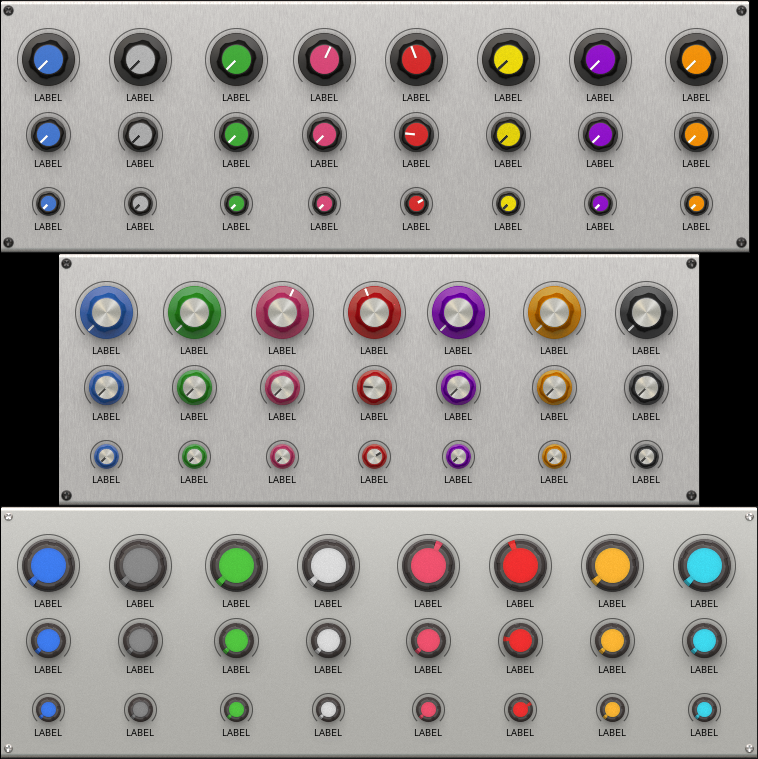 They are definitely a bit off of the official MI colors. I did think it was funny they included light blue as a color on only the Rogans. Ok, to be fair the set that looks kind of like standard Doepfer knobs has one with a light blue stripe, so maybe it was just a coincidence. When they release a textured paisley panel asset, we’ll know for sure.

Michael Hetrick here. Thanks for the kind words!

Really, a lot of credit goes to people like Olivier and the Supercollider contributors for generously making their code open-source.

@trickyflemming: I appreciate your work, and am looking forward to future blocks.

I have only posted one custom block so far, and it works very well with your A/D and D/A converters.

I have modified the Stereo Sample Looper from Euro Reakt made by @trickyflemming.

If you’ve ever wanted to see what kind of sampler I would make, this is pretty much it. Any advice or criticism is welcome. I know I can be pretty specific about my samplers. I really tried to piece together all my favorite tricks into one module. Heavy inspiration from the EPS. It’s just missing overdub and saturation on the sample input. The DSP is pretty easy, but I can’t figure out how to put the processed sample back into the table framework. No on board bit crusher as the one in Euro Reakt more than gets the job done.

Here is an example that pretty much clones the Monowave using OFI for the oscillator section. I didn’t use a wavetable as the sub oscillator like on the original, so I used the SH oscillator instead. I thought that 2 samplers that shared the same parameters save for an octave difference in pitch was a bit overkill. I did use the Monark filter to match the specs of the original synth, but it was very tempting to use the Paul filter instead.

I’ve got reaktor, the blocks are ok… However sometimes they seem a bit clunky the way they were designed to be patched, Its sort of a hybrid between how reaktor works and how a eurorack does. I however really love reaktors modal bank and grain cloud delay… I guess I would probably love rings and clouds too

I spent a couple hours playing around with blocks when it came out but it’s not the same as real knobs. As far as a Swiss Army knife module goes I would love it if reaktor made a eurorack module that could actually load and handle less cpu intensive patches that could run stand alone. Kind of like owl, euroduino, europatch block, or axoloti with some DIY circuitry to get the cv ins and put working. I would definitely recommend checking out axoloti. I know there has been some debate about fix verse floating point with the axo but for someone just getting into dsp (like me) the axoloti is great!

I’ve been on a filter kick recently. So far I have two flavors of EPS, a mod to an ESQ1/SQ80 type filter, and a Polivoks type filter. You can check those out here along with my other stuff.

Someone also made not one, but two great skins for my Vodka filter.

The sampler I have been working also had a few updates. I haven’t updated anything in over 24 hours, so It may finally be getting done.

I will now shift my focus to a couple of other blocks I’ve had in the pipeline.

@Illuminationstation: I am a fan of the new blocks set up because I don’t have to add all of the MIDI and modulation stuff per block like you woudl with a regular Ensemble. It just lets me focus on getting a sound I like. The interface can be clunky at first, but once you get some favorite window combinations going, patching is a breeze. I usually have one open to the front panel while another is open to whatever I am patching. Another big deal, is that it can save presets. If you had this hooked into your hardware modular, you could save your modulations and sequences while only having to re-tune your oscillators and filters. Also, if you need to reach out and touch something, you can always buy a touch screen.