I’ve had a go at creating a Krell patch, using the Plaits module, Maths the 2HP RND. 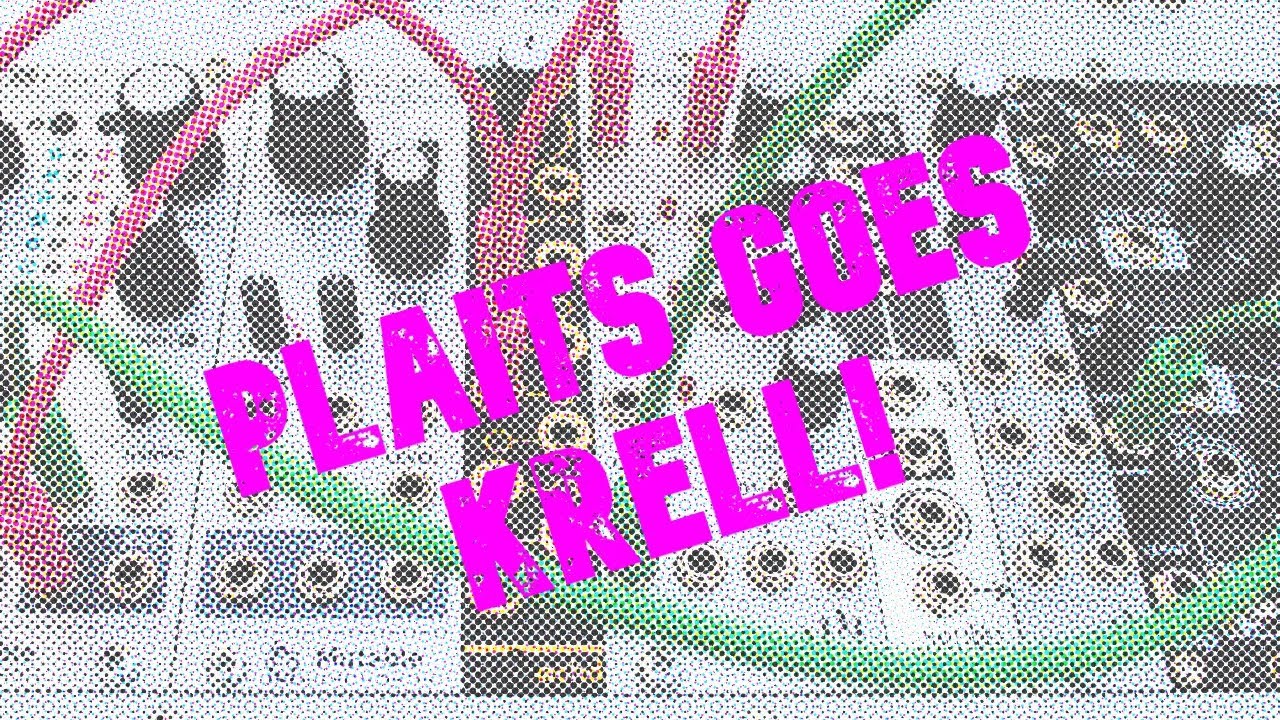 I continue to be interested in Buchla modules and was surprised to learn that much of the 200e system is digital. I had no idea. This has given me a new-found respect for the Plaits module and the many sounds you can create with it. For a short while I was beginning to think of it as a modular ‘preset’ machine but I have come back to loving it and am learning that it pays to spend the time experimenting with the different ‘algorithms’, tweaking and twiddling to unlock the many sounds you can coax out of it.

you broke the krell rule of using a sequencer. You use randomised decays/pitches tied to EOC triggers.

Hi, thanks for your response. As I say in the video, I was fairly sure I’d got it wrong. I’m new to this and have much to learn. I need to go back to Todd Barton’s video posts and study them.

Have a look at this krell patch breakdown. 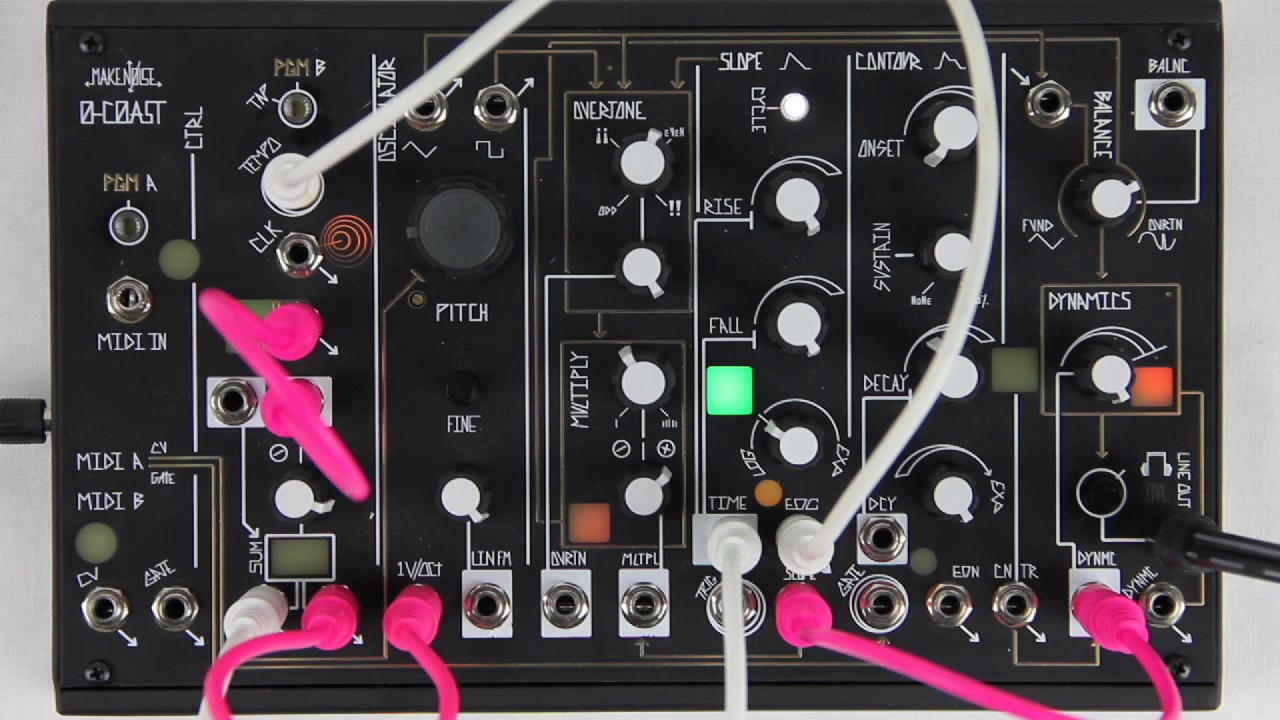 In this patch they use the Make Noise 0-Coast but you have most of the functionality in your rack.

You don’t have a sample and hold. What you could use is the SQ-1 in 0-5 volt range and attenuate with Maths to taste, or 0-2 volt range. You will need to set a ‘random’ variety of voltage ranges manually. In the true spirit of Krell patches you probably shouldn’t have the voltages quantised (you could set it to ‘linear’). Have it in random mode. One of the CV outs should go to 1V/OCT of Plaits and the other CV out goes to ‘both’ input of the Maths envelope.

Modulate plaits to taste and add lots of reverb so that it sounds like a cave on an alien planet!

Give it a go. It is a great starting point into exploring self-patched ‘generative’ music.

FYI - you could house the passive multiple you have outside of the rack and use something like the 2hp random module.

These two clips are also a good resource if you’re interested in generative music: 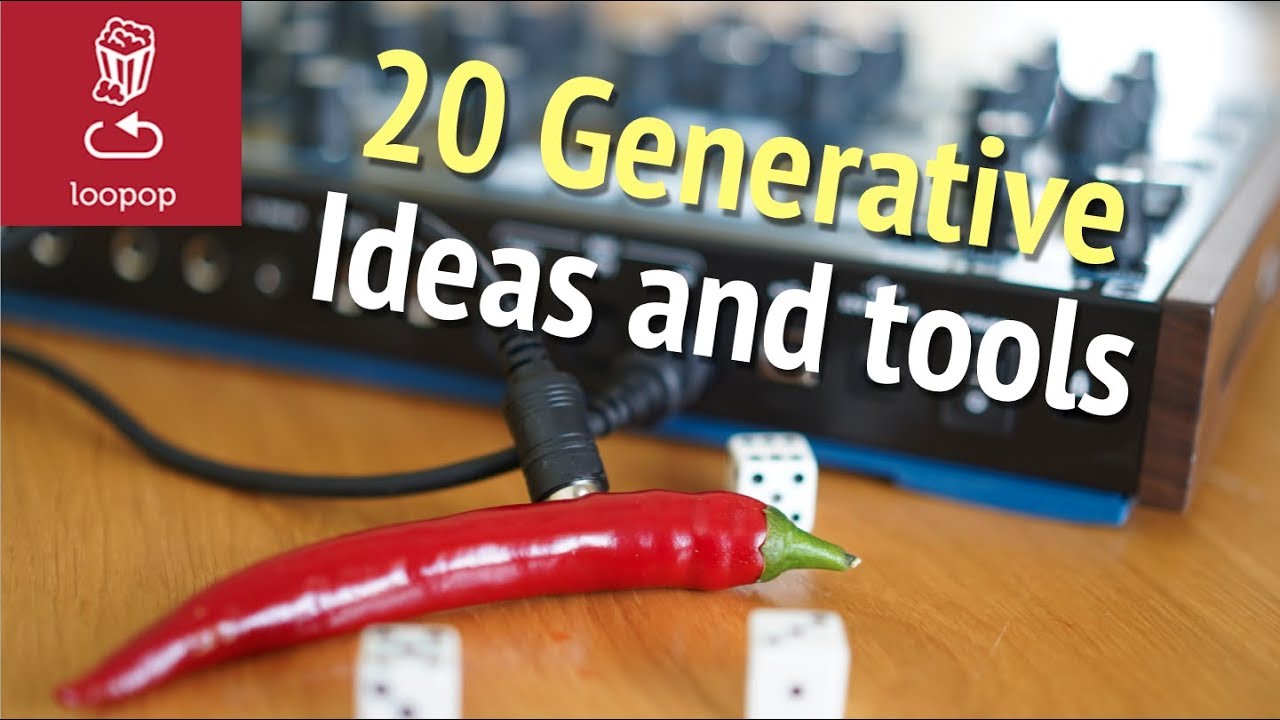 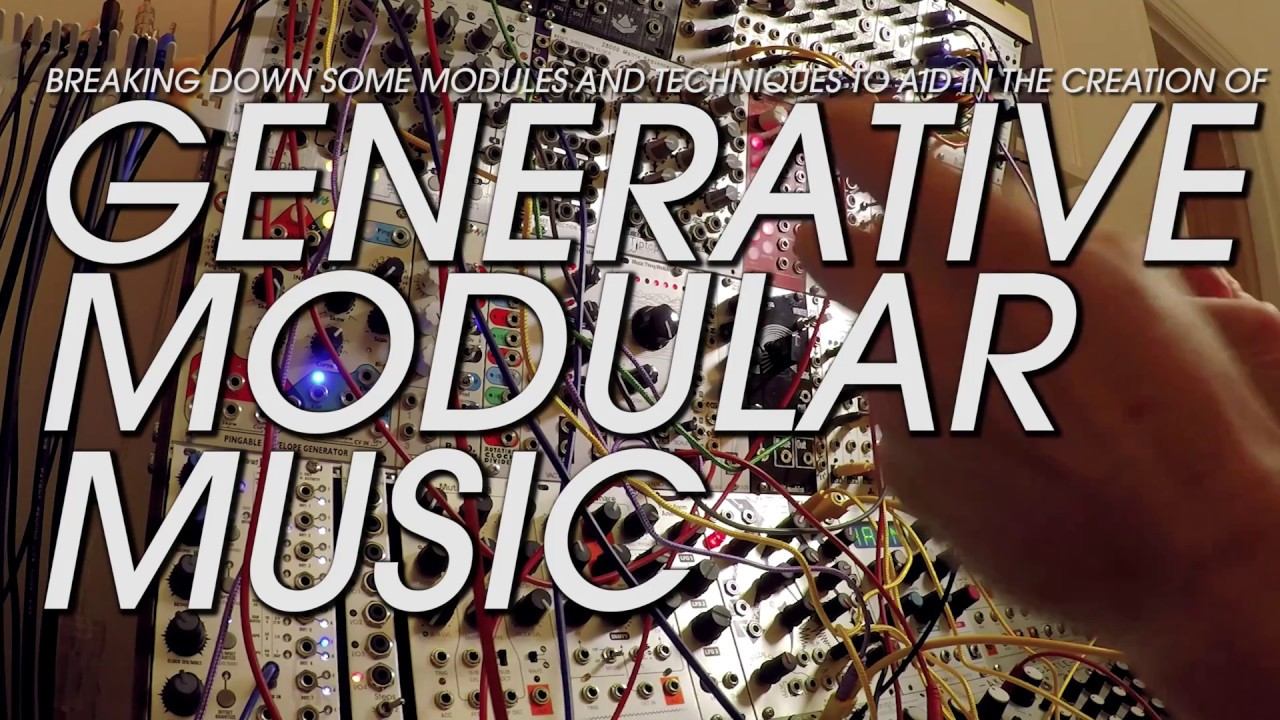 Hey abortivechronicles, thanks so much for the advice and curating those videos for me to watch. That’s my evening sorted out tonight. I do actually have a S&H (I think). I’ve got the 2HP RND - is that sample and hold or random, not sure of the difference actually. I am very interested in generative music. I have watched the Loopop one before but didn’t really understand it. It might make a little more sense to me know. That Make Noise video looks good. Sometimes I wish I had a reverb in my modular, but I guess I can always put it on afterwards. I did have a suggestion in another thread to ditch my passive mult and put a 2HP reverb in, which is a possibility, although I’m trying to train myself up not to continually want new modules (which is - for me - a very hard thing to do). Anyhoo, thanks again.

Sample and hold (s&h) is the basis of most random cv, but you can also use s&h to create v/oct cv sequences… it really depends what the source material is that you are sampling.

In the case of random cv, the source being sampled is usually noise (a hissing sound that surprisingly contains all of the frequencies). Because the rate of sampling is relatively slow you don’t hear all the frequencies existing at the same time, but rather just one frequency value (say low, medium or high chosen at random). This random value continues until a trigger or gate initiates another sampling of the random noise. It’s value again is random (low, medium, high frequency).

The 2hp rnd has a built-in noise source. Quantised random is s&h as explained and the smooth random is probably a linear slew limiter which instead of ‘stepped voltages’ will output a randomly varying voltage. The voltages will gradually ascend or descend towards whatever the next sampled value is instead of staying at the same value as the sample point. The 2hp rnd does not seem to allow you to choose an external source to sample.

For s&h I personally like MI Stages or MI kinks, which both have other extra goodies on board.

FWIW - I have owned the 2HP verb and I found that I didn’t like it unless I put a delay in front of it. I found the predelay on the verb quite obtrusive.

You seem to have a healthy dose of constraint. Your setup has quite alot of flexibility. Seems like a good idea to explore the potential at your fingertips first before expanding.

Thanks for the info about S&H. I thought the RND could produce it, but wasn’t sure. I think the only thing I can input is a clock, not any audio. For just 2hp it seems to do a pretty good job. I especially like the smooth output, which kind of wavers about. Both the smooth and quantised output have an output knob, which means I don’t need to attenuate it. Regarding the VERB, I do have a Strymon El Capistan, which has a reasonable spring reverb, although you can only effect the time in conjunction with delay time.

I really am trying to limit myself to what I have - I see it a kind of meta-random - these are the modules I have, what can I do with them? It’s v. early days in my modular journey, but I’m finding that reading/watching about synthesis designers (I’m heavily into Buchla at the moment) teaches me such a lot about what I already have in my little case. The legacy of Don Buchla, for instance, seems to be a big influence in the Make Noise Maths.

Thanks again for your advice and comments. I appreciate it.

Love this topic, thanks for sharing, Gloomstar!

Here’s a Krell inspired patch I recorded, with Plaits as the sound source, and Maths as the heart of the patch. Note—the pitch CV is quantized to a small scale to get things sounding vaguely ‘musical’ and pitched.

For those who are curious, I made patch notes: 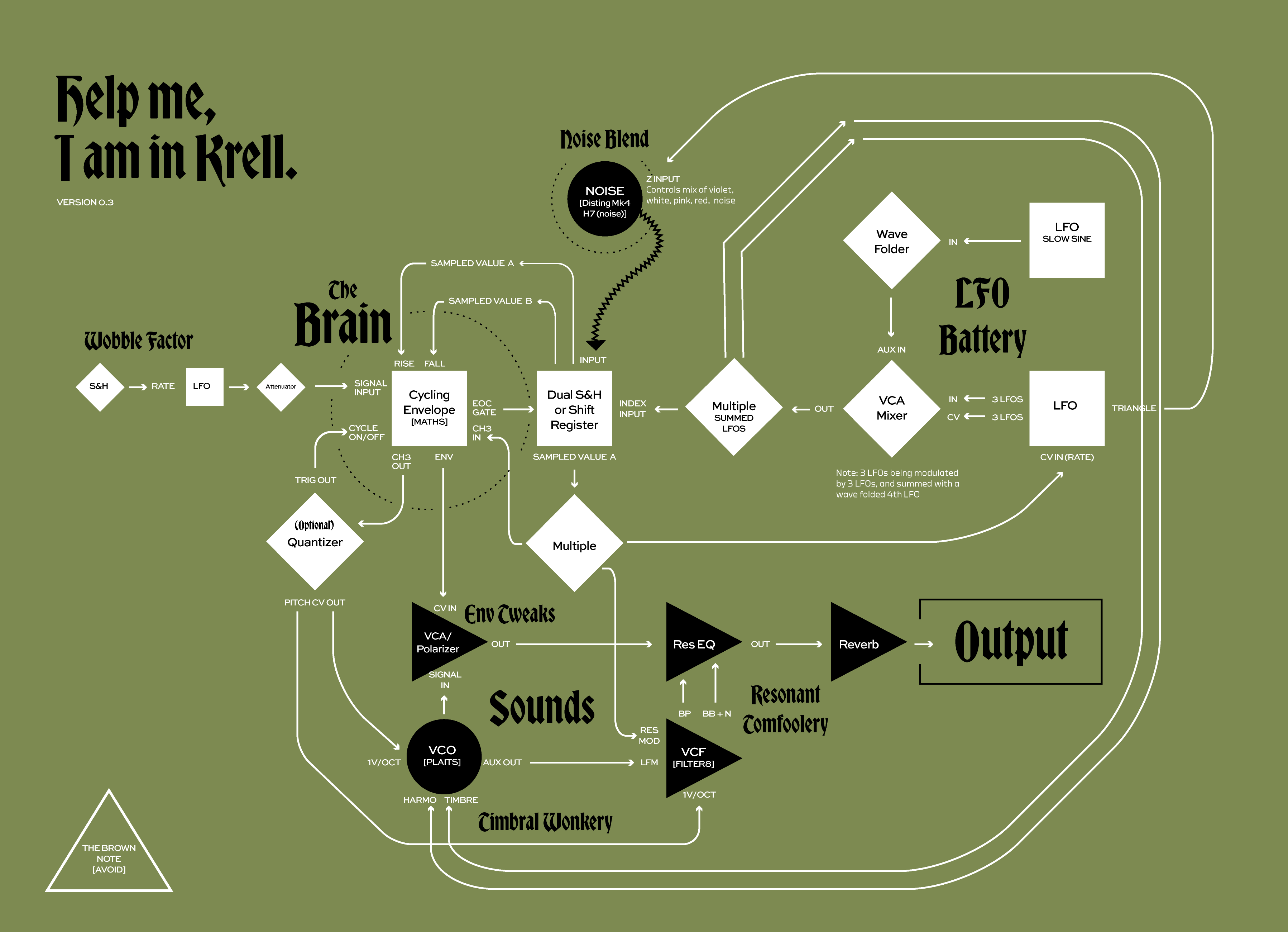 This is fantastic. There’s such push and pull between the various components of the patch. Also, the patch notes are next level.

That is a lovely patch, and a lovely patch sheet too. I don’t think I have the right modules to follow it exactly, but I’m interested with what you’ve done with the LFOs and the Mixer. I’ll have to try that. Thanks.

The 2hp RND should be good to give you both random quantized voltages for pitch (instead of the SQ1) and smooth random voltages to feed the attack (or decay) of one of your Maths cycling envelopes.

Just clock RND with the EOC of the Maths envelope that is going into your LxD. Instead of striking it, you could also feed that envelope into the Level input of Plaits (or CV input of the LxD) to get more full notes instead of just little bongo plucks.

It’s too bad you didn’t have just one more looping function generator with CV over attack or decay like the Pip Slope II. Does the DivKid module let you alter the LFO speeds? Might be able to use that.

I’m a huge fan of the Krell patch… feel free to PM me if you want to discuss it further. Would love to help if I can.

Thx for your ears! The summed LFOs added a bit of slow-moving animation the Plaits parameters. Part of my interest in using Plaits in a Krell patch is wide range of sounds in use.

The next time I patch this I want to use the Model input parameter, to further alter the sound of the patch as it lurches along. My idea there is to mult the end of cycle gate from Maths and use to drive a sequential switch that cycles through various voltage offsets, one at a time—perhaps 4 channels of Blinds—which would get patched to the Model input of Plaits.

This would trigger a different synth model with each EOC gate from Maths…which might be “a lot”—there’s already a tone of timbral variety happening. I’d likely try a gate skipper, brancher etc to reduce the probability that the Mode will change with every EOC gate.

And it’d be even more ‘evolving’ to have the various Blinds offsets be dynamic, by CV controlling them with perhaps some multed LFOs or S&H values from elsewhere in the patch. Fun to keep everything moving.

That’s what I’m talkin’ about! Great way to add variety! Another way you could add an element of repetition to the Modes being chosen, that you could slowly morph over time, is with Marbles (or any Turing Machine).

Marbles would be a great choice for Plaits mode switching! One could map the deja vu to a S&H in another part of the patch to add variation to the mode switching patterns. Many directions that could take things in.

That’s got me thinking about getting Tides involved as a modulation source, too. As a sort of mutant-offspring of the main Krell rise/falls. EOC triggers (and even Marbles gates) to trigger Tides, sending related modulation shapes to other corners of the patch. Basically…how much modulation feedback can we make, and how much of this can be combined and patched back into Plaits? Maybe a 2nd Plaits is needed

Indeed! A second Plaits could add drums/bass using the same mode switching while your first one plays melodies.

I’m working on a pretty complex 7-note polyphonic Krell patch using a Sinfonion module for quantization, Rings for my 4-note chords (strum by a 2hp Burst into a Boss Bow Two acting as a switch), Plaits as my lead voice, an arpeggiated Elements, and when it gets here, a Blades on bass. Then using switches, I’m hoping to be able to switch between that and a more standard sequenced song. Will post results once everything is in place.

Love the way this thread has taken on a life of its own. I’ve had another go at a Krell patch, this time using two synth voices. The low voice is a Studio Electronics Boomstar 5089 and the higher voice is my beloved Plaits.