I’m going to start off by saying that I have absolutely no idea what I’m doing. I’ve built a few electronic kits, and circuit bent a few things, and that’s about the extent of my digital music and electronic experience. Someone gave me a Shruthi for Christmas. I figured I’d put it together.

I believe I assembled the controller board without issue. The it boots correctly, the LEDs light up and change when I press the buttons and turn the knobs as described in the instructions. The LCD display also appears to display the menu properly.

The SMR-4 filter board has voltage in all the correct locations as described in the power supply check.

I am unable to tune the SMR-4 as described in step 14 because I don’t have a midi keyboard (or anything else midi). Is tuning required to hear sound? If so, I can go purchase one.

Without tuning, I have plugged headphones into the audio out but I do not hear any sound. I have tried playing the test note as described in the manual by holding down S1 for greater than 1 second, but I still do not hear sound.

Try to probe the circuit with an audio jack (tip to point to probe, ring to ground) to find where the signal chain is broken:

You’d rather get a MIDI keyboard. How were you expecting to play a MIDI module without a MIDI source?

Thanks for the fast reply.

At point 1, I hear what I might describe as a “warm” buzzing sound that seems to fade slightly over time. At point 2, I hear a similar sound, but quieter. At point 3 I hear nothing.

IC7 is inserted correctly. I don’t see any bad solder joints, but I could be wrong.

This is a picture of the bottom left. It may or may not be helpful. 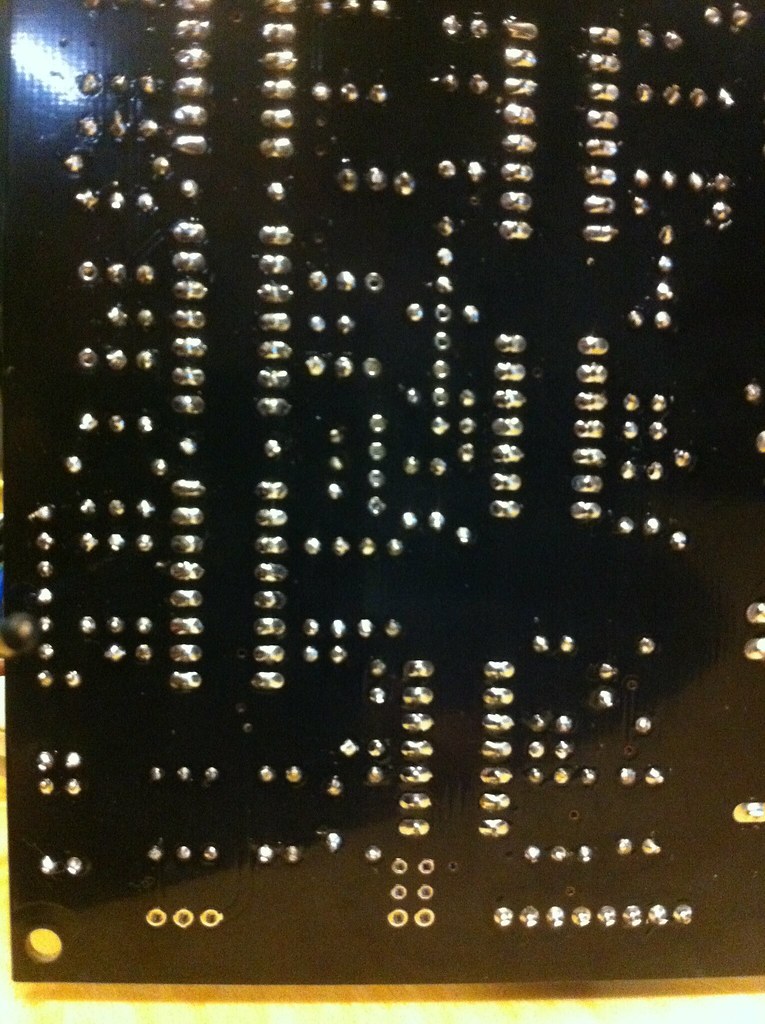 I am curious, is the sound I’m hearing at point 1, and 2 correct? I have to turn my speakers up all the way, and it’s still relatively quiet.

If you have a way of recording the sound at point 1 and 2, please post it.

The methodical way of troubleshooting a circuit processing audio signals is with a scope. Do you have access to one?

Otherwise: try removing IC7, connect a 10k resistor between pin 1 and -5V ; and measure the voltage at pin 1 when you change cutoff. Which values do you read at cutoff = 0 and cutoff = 127?

I do not currently have access to a scope, although I was considering purchasing this: http://www.adafruit.com/products/468
Would that work?

I believe pin 11 should have -5v according to this:

I’ve ordered the scope I mentioned above. I’ll report back when it arrives.

Please play a MIDI note while doing the recording ; and zoom out!

Well, I feel kind of silly. I plugged a midi keyboard in, and I had a signal at all of the points in the diagram. Then I plugged my headphones in and everything worked just fine. I’m a little puzzled why the test note didn’t do the job, but it seems to work fine now.

Thanks for all the help!

Hi! Excuse me, but me too, i have a similar problem. I probably made ​​a mistake when i built the SM-4 filter board. Because i have no sound.
The signal is broken at pin1. No problems with the other pin points, just pin1.

Are you sure the Shruthi receives MIDI?

I think, but I’m not sure… It is there a way to see if Shruthi detects midi? Maybe a led that blinks when shruthi synth receives a midi message? Anyway I connected the midi normally, the sequencer (ableton or a beat machine) midi out -> midi in Shruthi. Maybe it’s a manipulation with it, that I did’nt understand.

Thank you very much, but it’s annoying because this musical ‘note’ flicker doesn’t appear on my display.

I tried to replace the shruthi with another synthesizer and it work. So the problem is not a bad connection with the midi cables. Either the external sequencer

Maybe I made a mistake somewhere during the assembly of Shruthi, or when either I have a defective electronic spare part, or so I don’t understand how to operate it.

Ok, so no flickering note, then its getting no midi data (Check midi channels too of course, although default, is 1).
However, there is only about 4 components between the midi in socket, and the MCU itself, so you won’t have much to check! Have a look at the 6N137 IC and its surrounding components. Particularly the diode for correct orientation.

Thanks. I think the problem comes from the optocoupler, because never voltage passes through any pin.

I’ll add to fcd72’s troubleshooting checklist: make sure that you have MIDI input going to the MIDI input jack, and not the output jack