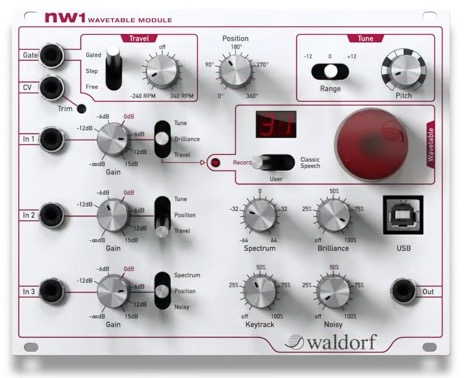 What looks very strange is the dB scale on the inputs. It seems to me that the module’s inputs will be able to handle line-level signals (who would need a gain of 15dB on a CV?) - that’s a weird design decision, compared to classic -oo to 0dB attenuators or attenuverters.

Another quirkiness is that the frequency range appears to be limited to +/- 1 octave (with fine adjustment of the note within one octave). So it’s more something you’ll CV-control from a keyboard than a free-running oscillator. No dedicated FM input, no sync. Few CV inputs but lot of stuff going on under the hood. I can’t help seeing the same simplifications or wrong assumptions (or “mistakes”?) I did when I transitioned from desktop synths to Euro modules with Braids.

(ok, that video hardly contains any info at all, should have watched before posting)

Control layout and overall structure reminds me of Nave. Especially the Spectrum, Brilliance, and Noisy controls seem to have been taken directly from there. I agree with @pichenettes that it very likely does it thing with additive synthesis, again just as Nave does. I would not be surprised if you could hook your iPad up to this module and use Nave to add and edit wavetables, especially so that you can use its speech synthesis engine.

USB presumably for the 50 or more firmware updates you’ll need before it is stable?

Have to say that there’s some interesting news in that video. Nave as a VST/AU plugin is pretty cool as is an iPad version of Attack which seems to come with a decent sequencer judging from the screenshots.

I would not be surprised if the Eurorack module runs pretty much the exact same audio rendering code as the wavetable engine in Nave. It will be interesting to see what they’ll price this at.

Oh I wasn’t familiar with nave. So it’s definitely additive. And “noisy” is just random phase modulation in the oscillators.

It’s exciting that JoMoX is expanding their Euro lineup, and that new/old companies are joining the party. First the not entirely unexpected Moog Modular (Harley Davidson) old stuff at high prices for rich old folks, then new synths all around.

It would be interesting if the digital, metallic-sounding filters of the MW2/Q-series ever got ported over to some chips that are in current production, the effects sections from said gear also thrown in and make into new modules.

Wonder what the new DSI synth is?

Wonder if you can rent one

And, soon we’ll see Serge from TipTop. Plus, we have Buchla-alike stuff from Make Noise, Verbos and soon Sputnik Modular (Roman F). On top of that we’ll get Möög-inspired gear from Studio Electronics in Eurorack too.

Now I only need to add a beer tap and a soft ice cream dispenser to my rack and happiness is around the corner.

So far little has proven to be really exciting. I was expecting some more surprising from Moog. Putting Nave into an eurorack module with such weird controls seems like a weird move from Waldorf (and yeah, who knows when the software will be finally stable, the Blofeld apparently still isn’t).
The only interesting new thing is the T-Rakoonizer! That might indeed be interesting… though only 6 CV inputs? Seriously?

That Waldorf module looks amazing. I expect it will become available to buy in about 3 years, on previous form.

That Waldorf module must be real smart. Look, its got a big red HAL light on it!

“I wouldn’t tweak that if I were you, Pichenettes…”

Jomox T-Resonator in Eurorack form seems like it would be good fun though![](?
T-Rackonizer for a name though)?? cringe

And big giant Moogs for Mr Zimmer and DeadMauFive! Wooo!

Sounds like you might be able to hook up an USB keyboard to just type in text on the NW1? It does have the wrong connector for that though…

i sount that it does usb host. seems more likely that you’re supposed to upload a text file from a pc…

The Jomox module is nice