Looks like the original designer (the guy that later also built the “Schmidt”) re-issued one of my favourite 303-clones from the late 90’s. 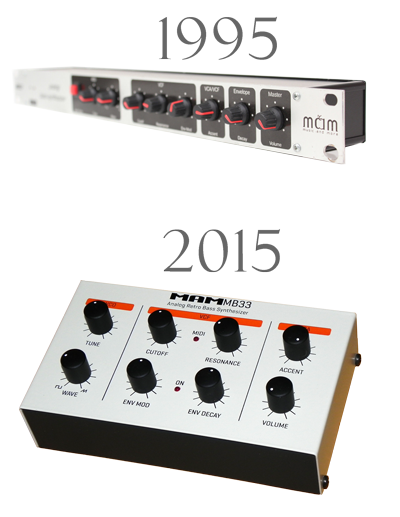 For a hundred quid it’s a good way to get some 303 bass I guess.

The old one was quite useful , yet not sounding too close to a real 303…
Unfortunately they go for “Tischhupen” design, so +1 for the old one.

Yeah +1 for the rackmount units. I still have an early MK1 and I kinda always liked how it sounds. The new one is obviously made of SMT parts whereas the original contained some “rare parts”. But they are just 139,– Euros at Thomann, not a bad price, so I might give it a try.

One funny thing is that used “original” units seem to be rising up in price recently. I regularly look for them at the bay, fully working MK1s are lately being sold for quite as much (or more) as the new one. A few months ago you could still get them for like 70-90 Euros if you were lucky.

Best part of this news is propably that MAM seem to be back in buissnes. I’d really love the RS3 or ADX1 to be re-issued. Or maybe they even come up with something new?

Or a midified version of the VF-11.