I am posting here because if it wasn’t for MI and the wonderful community that surrounds it, I would not be in a position both skillfully or economically to take on such a daunting task! Although I don’t have the time anymore to actively participate in the forum, I do travel here at least once a day to read the lastestsst

Over the past 6-8 months I have been working on a Eurorack Module that will be rackless. These devices will be passive inline modules that plug between patch cables.

The first two to be released are:

The Pocket Knob pretty much speaks for itself. Its just a knob with an IN and OUT jack for attenuating CV and Audio Signals.

The Pocket Gate is a vactrol based passive VCA. Simply, a CV IN and an Audio IN and OUT. The CV in can be anything from a trigger, gate, Envelope, LFO, etc. to drive the Vactrol. Send your VCO or any other audio source through the IN & OUT and get VCA type effects. They will come in 2 flavors: Fast (Quick release time for percussive sounds. Slow (slower release better suited for sequenced patterns or larger, drawn out drum sounds).

Currently the case design has been finalized. Next step is to have the cases made with injection molding (a much more daunting task than I had originally thought) and get the PCB’s made. At this time I do not have an ETA, but if my foot was put on a block to be hobbled, I’d say by the end of the year or very beginning of next year.

If you have any questions regarding this project, or are a retailer and would like to sell these in your shop, please contact me at laurentidesynthworks@gmail.com

FYI, the picture below shows the 3D Printed Prototypes. The cases will look much nicer when complete and will be white with nice Lexan overlays. The logo will also look a lot more banging. Also, the shaft on the Attenuator will be changed to a standard D-Shaft so a knob can be added, giving much better control.

This is just the 1st of a series of devices I plan on releasing in this form factor. 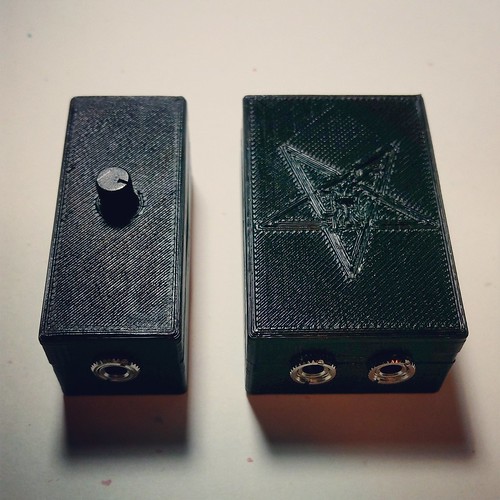 Thanks for your time,
Adam
Laurentide SynthWorks

This is very cool! Good work - I’d definitely be interested in at least the inline gate, and maybe even the attenuator when I learn more about my modular needs.

Thanks! You’d be surprised how often an att is needed.

I’ll have several of those Aleister Crowley vactrols, please, when they are ready.

Edit: These are not vactrols.

Haha, thats not the vactrol! Thats a proto in-the-works. I don’t have a case for that one yet. It’s a ring modulator. Bummer is those were the smallest audio transformers I could find to spec, but they are too tall to fit in the Pocket Gate case. So, if these sell well, I will be making the Pocket Ring next…

Oh, I thought you had sourced some cubic vactrols…

Cold War era vactrols from Russia made from a Vacuum Tude Display and small rodent that opens lever when sees light.

Well, whatever they have inside them, they are square.

Damn, I was totally gonna buy one until I saw the $110 price tag! Zooeymama!

Also, these aren’t vactrols and neither are these but these are

Although I’m not entirely sure about the name Pocket Knob, but then, even my 12 year old regards me as childish. Matchbox® Modules would be an idea name for the line, but you’d almost certainly receive cease-and-desist letters from the very litigious owner of the brand of die-cast model cars. How about Patchbox? Nope, that’s taken. BatteriesNotNeed? PassiveProcessors? PassivePillboxes? PassivePacks? PassivePucks?*

Ill tell ya, the name has probably been the hardest thing to come up with. Yes, pocket knob is the exact play on words you’re thinking. I’m still not sold on the whole pocket thing but I’m stumped on what else to call it. Plus now that Korg has the sample pocket, I’m even more inclined to change it.

They exist between patch cables you say?

You have a pentagram as your logo, and the modules are passive. I think it all fits nicely.
Well, it may be too Catholic for some.

Purgatory Modules in the search brings up an Amiga .mod database called amp.dascene.

I’d say that is pretty open to trademark™.

Instead of saying they are passive you could say that they are run by the tormented souls of sinners waiting to receive penance from the living?

OK, in addition to the suggestions above, I offer PassiveAgressives as the moniker for the entire line. I also offer Jack-in-the-Box. I shall ponder names for the individual boxes-of-tricks. Oooh, what about Blocks-of-Tricks? Or MiddleMen? Or Intermediaries? Or shorter, just Mediators? Thus, your Pocket Knob becomes a Mitigating Mediator and your Pocket Gate becomes a Gating Mediator (that’s not alliterative, though, will ponder some more). Or Moderator? Thus, Pocket Knob becomes the Middleman Moderator, and Pocket RingMod becomes Middleman Modulator, or Middleman Ring-modulator. Could Pocket Gate be called the Middleman Manipulator? These are all exceptionally dorky names, though. So how about Beelzelbub Boxes? Thus Pocket Gate becomes Hell’s Gate or Devil Gate (yeah, yeah, add a distortion circuit to it and call it Devil Gate Drive). Pocket RingMod becomes Rings of Satan (play on rings of Saturn intended). Pocket Knob could be Mitigating Circumstances. OK, I’ll stop now, otherwise this could go on all day, and I have work to do.

If purgatory is a bit to specific for you, Limbo Links is also similar. However, that returned double the search results of the others, and they are mostly related to “Limbo”. For example, there is a game and the play-throughs of it on Youtube.

Name them Natas xyz? If you play record so and so backwards…
Product naming can be turned into this big, full production if you let it. Splicing these boxes in between modules would be intriguing though. Sort of a juxtaposed jumble if you like to play with words and loose interconnections.

Hot damn bennelongbicylist, theres some good ones in there. I especially like Gating / Mitigating Mediator. Purgatory and Natas got me thinkin though. Maybe call the line Legion. Legion’s Gate, Legion’s Knob, etc. Product line motto: “I am Legion, we are many”

INJECTION MOLDING? How many are you planning to sell??

@qp: If we are going to make a Ghost Rider/Green Arrow reference, these modules should definitely be run on the souls of sinners. No way they are passive.

Yes, I know that Legion is a Biblical demon and that Natas is also Satan backwards.

Anyway, Legion returns around 120 million results though… I suppose putting modules after that would make it smaller. Yep, that pushed it to under a million, I say that is good. Legion Boxes returned over 3 million results.

Legion Modules makes sense if you do plan on selling full systems in the future.

It was late… not liking now

Or… Tourniquet for the Attenuator. Bleeding Light for the gate…

@fcd, they will be cheap enough that several could be bought without a thought. The plan is to have both cases milled into the same mold. Or, people will be getting christmas gifts for years to come. The initial cost will be pretty insane but I’m confident. Plus the plan is to design other devices that’ll fit in the same 2 cases.