Just one thing about the Ambika volume pot discussion

You know it will look really bad keeping in on the FRONT, do you?
I know desoldering a pot is a bit of pain (and you might break things if you don’t pay attention) but moving it to the BACK will look a lot better.

I don’t have an Ambika, so it’s really the same to me, but I wanted to give my opinion, since I will am working on the frontpanel design with Adrian.

@Vcent
Professional gain management would be deliver the highest possible (preferably symmetric) Level to the Console and any decent Console should take the full Level without any hassle - thats what the Gain Stage is for. Some of the better Consoles even have a -20dB Pad Switch here so they happily accept anything from an old ancient Telefunken Mic to direct Modular Level.

My Ancient MX-8000 has about 18dB Headroom before you start to hear any distortion (and even then its quite musical, it starts getting bad at +22, +23dB) so i level the Inputs to 0dB. It would be a waste of headroom leveling a line Signal lower at the source and boost it up with the Gain Stage (thus adding Noise) to this.

Every Output Stage on a Synth should work with optimum S/N and no distortion whatsoever at Max Pot setting. At least thats how Mutable Instruments, Sequential Circuits and Waldorf design their output stages on the gear i Use. I can’t tell equally good about Korg and Roland……

Yups, the Volume Pot to the front is pretty much the only major Design Flaw i ever spotted on a MI Product……

Functionally nice vs visually hideous…
I pray that the mixer-less crowd get mixers or learn to use the back-door pot. It would be nice if the official case wouldn’t look like a relative of Lassie…

Well there are good reasons why it is where it is. It actually didn’t even look that bad until I started to mockup a frontpanel for it. But now that we’re in the process of making a beautiful new metal case it’s worth thinking about it and really considering all the implications.
In the end the volume knob is not really something you use all the time, so it would make sense to place it on the back.

I think it looks fine and I prefer to have my volume pots where I can actually use them.

Also, I assume Adrian will be allowed to sell the official design in any configuration you like, so this discussion isn’t really needed.

Of course it’s needed. If it leads to the official product not looking like it got a severe beating from the ugly stick it’s always a plus

If anything, this would reduce support load and/or returns for Olivier since people who order from the store won’t run into the issue where their new case doesn’t fit and they have to desolder.

Keep in mind that it’s not unlikely for people without a lot of soldering experience to want to order a metal case for an Ambika they bought assembled.

It saddens me that people are so in love with the ugly and that they’re obviously too stupid to be able to desolder a pot or handle a drill. Although it would explain a few of the mistakes that exist in creation such as genocide and flat beer.

I guess it’s order by Adrian then.

I don’t think it’s ugly; I think it breaks the symmetry of the front panel in a pleasing way, just like Marilyn Monroe’s beauty mark.

No. It’s about as ugly as something Steve “Monkeyboy” Ballmer would have produced and shames an otherwise excellent synth. It’s no innocent birthmark, more like an old-school eastern dictator waiting for the kill

Back mounting the volume looks soooooo much better on a metal case. It’s not as big of a deal with the plexi case because its clear and there’s plenty of ugly solder joints to draw away its attention. 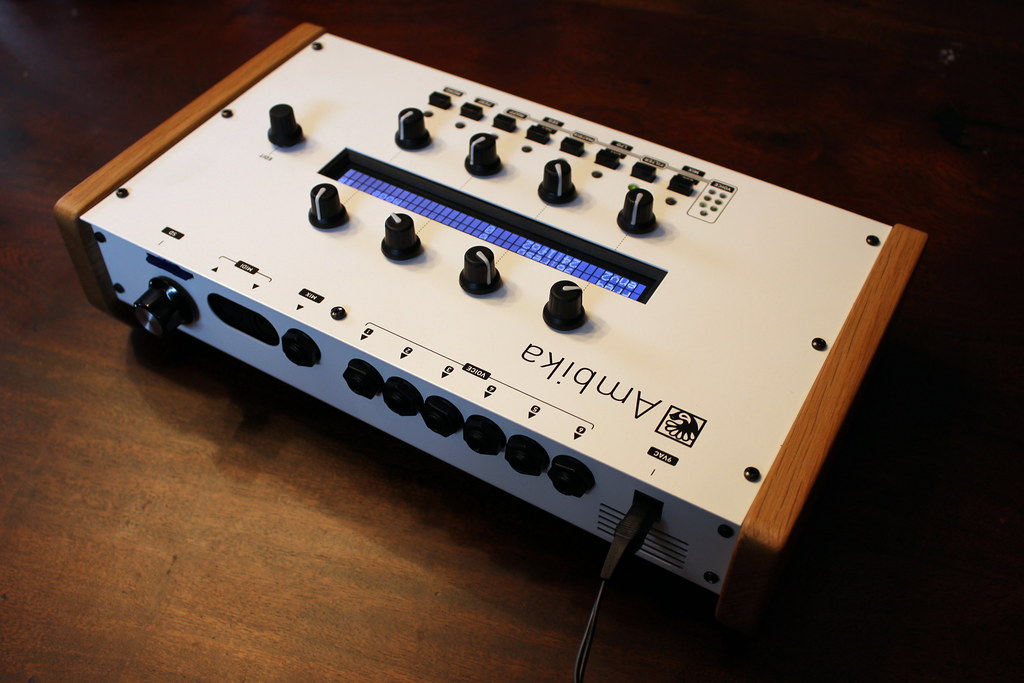 Yes it may be breaking the symmetry and ugly to some…
But as long as I’ve used Ambika, to be able to visually always monitor, at what stage the volume is, has saved too much dumb troubleshooting and my speakers and nerves many times. Yes the placing is a bit off, but at the back it’s also a bit stupid and makes the availability too impractical.
But why not some othe place? I don’t remember where the ic’s and other stuff exactly are on the , but isn’t there any room for any smaller pot on the frontpanel? symmetrically speaking, what about the other side of screen, “complimenting” the edit button…

I think it makes sense to put it on the back, since you can easily reach a finger or two over the edge, and adjust the volume…
But most of my synths have it on the top…
Anyhow, it’s a moot point for me, since I don’t have an Ambika either…

> but isn’t there any room for any smaller pot on the frontpanel? symmetrically speaking, what about the other side of screen, “complimenting” the edit button…

Because routing traces carrying audio signals all the way from the output circuitry to the middle of the power supply section would be like adding a new oscillator to Ambika. Hummmmmm

How about a new version of the PCB? With the volume pot in a better position?
Edit: Oh… ^^

It won’t fit, but i’d stick the pot on the left side in the same position as the encoder. Then it would be symmetrical.

Doh, maybe I should read the thread

Perhaps Stevie Wonder and Mats Öberg wouldn’t care, if it’s on the back side, but as I said, the ability to SEE where your volume is…
But yeah, I guess it’s purely a question of practicality vs. aestethics…

Personally i have no Volume Pots on my racked/boxed Synths since they are all routed to a Mixing Console - every Unit is set to its max Volume, leveled by the Channels Gain and then i use these sexxy Faders…. so my soon to be finished 2nd Ambika will have no Volume Knob.

For Live Use its another story, here i have 2 (3) Keyboards i use and I’m quite happy that every one has a dedicated Volume Knob - but thats live.