I accidentally a braids

bought! it’s taken me a while, but i’m finally onboard the mutable euro express

welcome aboard, have a seat and ready your wallet for some workout!

You are doomed. Welcome to the Club!

It could be worse. I accidentally a grand piano.

welcome to the club of the doomed.

Welcome to the ride. Accidentally accrued offspring and switched jobs. Life tends to happen to most of us, doomed or not

Life is what happens while you try to get your dream modular together.

i bumped a klee and accidentally a braids. real life is severely limiting my inexpert knob twiddling time these days unfortunately, but i sure can’t wait to see those eight segment green leds blaze up!

is there any of the “classic” (for want of a better term) synthesis techniques that aren’t covered in some way by the various braids models?

old-school Darmstadt-style additive synthesis maybe… but for the rest, you’ll have enough synthesis modes to chew on for the next 20 years.

some of the pluck and wtx4 sounds i’ve heard are amazing.

this patch in particular:

And remember: theres only one thing better than a Braids: two Braids 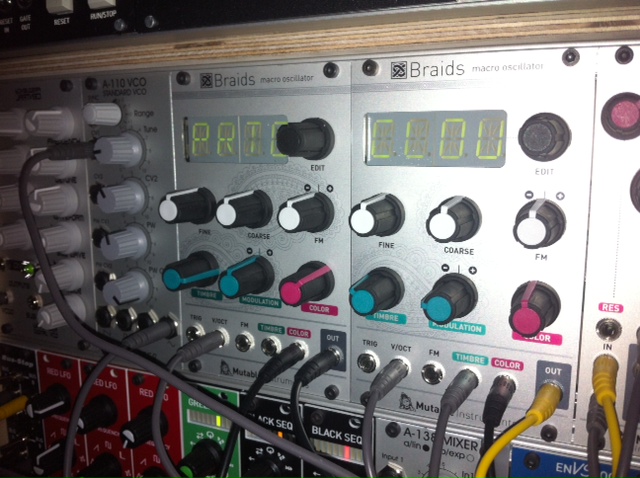 There is a debate in my head on wether buying 2x of a module is better/worse than the diversity of getting something within the same type (be it VCO, VCF or envelope, whatever) but different…

Usually, on Muff’s, DIY people tend to buy stuff in multiples of two. I usually do it as a way of having an extra reference in case I screw something up while building, plus I like to make sure that at least one of my friends has some gear overlap. However, for a modular… That thing’s gotta be extremely useful and cheap, or just plain stellar.

I give you one guess where I rate the Braids

Usually I like to mix it up, lots of DIY from J3rk/Dustin Stroh, some DIY from Elby, bits of Buchla DIY from Roman F and what not, plus ready-made things from MI, Deopfer, Eowave, Intellijel, Bubblesound, Plan B, the Harvestman, Make Noise and TipTop. Looking to add some Verbos and moar MI to it all…

I agree with @Jojjelito. I rarely end up with duplicates of anything (even my Shruthis have different filters), or dual/multiple modules, although I am considering making an exception for a Doepfer QuadADSR. I have a Peaks too and use it mostly as a dual EG. But, no duplicate VCOs or filters.

I am considering to get a second Peaks. it does so many things that having just one is a pity. So I could have one running as an ADSR and one as a sequencer or LFO

A second peaks could be in my future as well. Its so useful. I usually don’t buy multiples either, but I made an exception for the 4046 (although the latest is a bit updated), fonik mixer, fonik switch, and the manhattan svf.

@fcd72 And remember: there’s only one thing better than two Braids…

(If you use OSH Park for PCB fab, inevitably you end up building modules in multiples of three, because three is the minimum order for their boards. Such a shame to waste a good PCB, and I don’t think it is conscionable to sell spare ones. With Seeed, the minimum order is five, and I know of at least one DIYer who has a set of Braids PCBs from Seeed…)