How do you plan on housing your shruti?!

EATYone: Yup, I saw that. I am a late comer to the party here so I dont even have any of the hardware yet so fitting the LCD with the kit is on the list of stuff to finalize. I just did the basic “4 screws and a counter sink” based on a chinese LCD I have a bunch of to get basic pricing from FPE. Moving stuff around does not change the price, just adding features does…

and btw, images are added by just putting a ! and ! at the start and end of the URL… 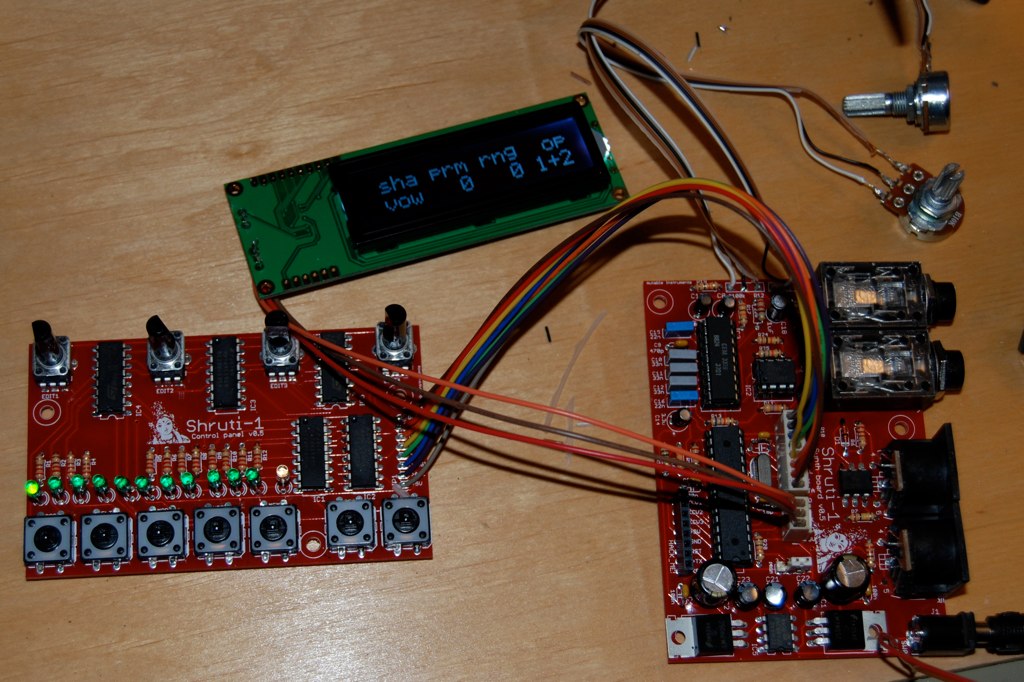 i think i’d like to fit this into a 1u rackmount case. (when i get money together to buy a kit…

That LCD is a trip, never used a serial one before. Was wondering why it only had three wires.

I assume we could use the SerLCD backpack and any LCD?

I cant seem to find a mechanical drawing on the sparkfun site, anyone have it?

@altitude: I used a LCD display with a serial interface because I was short on pin count and code size. Later, I figured out I could put a shift register and write to the the 6 pins of the LCD I needed through it, but it was a bit late… I am not sure I would make this choice again anyway

Yes, the LCD backpack from Sparkfun could be used to make any LCD “compatible” with the Shruti-1

Not a bad choice actually, 16 pins and wiring up a proper ribbon is a pain in the ass and I’ll happily pay the extra $15 for an serial LCD so I dont have to deal with it

Altitude don’t forget the 3 CV in too

Has a battery enclosure, area for the LCD (with bezel plate) and room for all the controls and then some.

I forgot to update you on the round buttons: the EG1091-ND are a tad larger and do not stay in place. Will try EG1882-ND.

I am intending to build a similar custom case as I have for mi Midibox SID…
{https://p-cord-images.s3.amazonaws.com/polySID1.jpg}

Is anyone else planning to build a keyboard version?

Whoa, TD! This is REALLY nice! Could you elaborate a little on that - I LOVE that case! Very tasty, in fact - the best housing job on a diy synth I have seen so far. fantastic!

TD, great built. have you posted it on midibox too?
i’m planning to learn how to do that too. (edit: a keyboard)
how did you do it? did you use qbas’ code?

Hi,
thanks for the nice comments.
I’ a bit embarrassed I didn’t really document the building process, I promise I will better so for the Shruti1…!

A few comments on the build:

There’s some more pictures of the synth:
https://p-cord-images.s3.amazonaws.com/polysidgallery/index.htm

I’m hoping to get together with a friend whose main hobby is making “stuff” out of unusual materials to construct a custom case. Probably something in clear perspex with a pile of completely unneccessary additional LEDs, but I’m not sure yet. I want something that can keep it compact and self-contained but which allows for maximum future hackability, so we’ve got some careful planning to do…

I would like to make a bamboo case by way of ponoko.com as I did for some modular front panels:

If it’s cheapest. If buying a faceplate is cheaper than making the whole enclosure, I’ll prolly just do that instead.

Still have to figure out how to do 3d - I guess people are using SketchUp > inkscape> EPS for that.
Of course I’ll share the design if anyone’s interested.

smrl: That’s a dope idea, With the Hindu etching it would look dope. Head over the midibox forums and dig through there and see how the SammichSID was done. You might even want to contact Wilba since he has a pretty good handle with making 3d ponoko parts. The laser burns away 0.1mm of material with every cut so you have to take that into account when doing 3d parts that are supposed to fit tightly together. This would definitely be the cheapest enclosure you could do however. I did 5 GM5x5x5 cases for $39

Yeah, your case inspired me to do my modular in bamboo

However, it seems that the etching must take a substantial amount of time. I’d guestimate that this one panel was $40-50. Burning a bunch of holes and etching lots of text adds up quickly… My one panel (size b, what was that, like 15x15 maybe?) was $90 shipped.

Your design was pretty minimal. I think it could probably be for the Shruti-1 as well, but there would still be a bunch of holes…

Thanks for the heads-up tho, i’ll try to get in touch with wilba.