Hopefully Olivier doesn’t mind me posting here, but I got my start in DIY music electronics (or any kind of electronics!) two years ago when I bought my first Shruthi-1 here and this brings me full circle.

I’ve just released a DIY kit called the Groovesizer. When I wanted to start learning about DIY music electronics I got myself an Arduino board - I wanted to experiment with all of the cool audio projects that have been created for the arduino and wanted to make a PCB that collected all the hardware for the different projects on one board, and that one could switch between with jumpers. 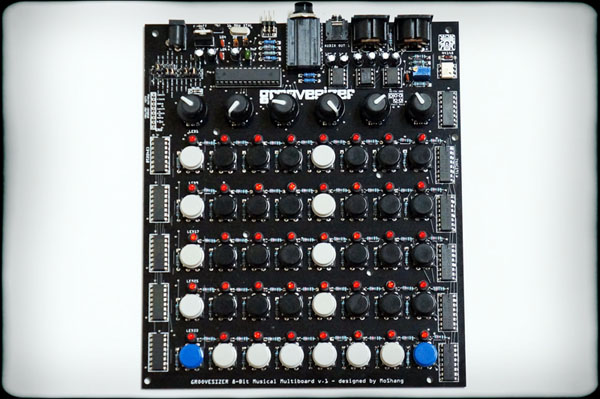 Long story short, the fruit of these labors is now up for sale at groovesizer.com I’m in the process of making all the design files and code available, too.

This looks like an awesome project! Clever use of those jumpers to make the hardware platform so versatile.

Also, holy crap that enclosure example on your site looks great! I was wondering how you would fit everything under one flat top panel, and the answer is you won’t

Thanks Joshua! Yeah, I’d hope that the enclosure would be done by this stage, but it’s all in the hands of the manufacturer now. Hopefully I can sell some enclosure-less Groovesizers to help me pay for the production cost of the enclosures ;^)

Hi Moshang.
this thing looks great! And i would definitely buy one if i had the option of just buying the PCB since i have most of the other components in my stash.

Very interesting project! Could be a great companion to an analog drum machine- almost like the MFB Urzwerg.

@shiftr I plan to do PCBs only - probably around the time that the enclosures are done (early November).

This is super cool.

This looks ace! I’d snap one up now if I had some money.

Once there is a case I am all in.

Which opto do you use for the MIDI? I see 6 pins and it scares me - there are many schematics in arduino-land which reference the 4N28 but it doesn’t work with all MIDI hardware. CNY17 is pin-compatible and appeared to be more robust. “active” optocouplers like the 6N137 and 6N138 which have a gain element are usually a better choice.

Hey Olivier - thanks so much for the tip on CNY17. I found this out to my detriment (100 x 4N28s later!) Currently I’m using a 4N35 which at least works with all of the midi equipment I have to test with.

I’ll add 6N137s or 138s to a growing list of improvements for a future V2 of the board. I’ve already added a reverse current protection diode (luckily an easy fix).

i would be very interested to hear more about the Bravo firmware version and what it can do? Will it basically be like a traditional drum step sequencer? how many drum parts per sequence?

have been trying to find a suitable midi drum sequencer for 9090 project!

@sd88me I’ve been focusing on the Alpha firmware, so I haven’t done much with the Bravo code beyond triggering sounds from the Groovesizer buttons. The biggest hitch with the Bravo code is that there’s very little memory left after the Bleepdrum samples. I’ll have to replace them with shorter ones to give myself room to program the sequencer. What exactly the Bravo’s sequencer will entail will only become evident as I get my hands dirty with it. There’s definitely enough resources to make a neat mute (ie. MIDI only) drum sequencer though.

funny, i was wondering about how to achieve exactly this kind of phasing effect with squencers jus a few days ago!

Love the use of Steve Reich. I performed Violin Phase once.

My groovsizer is built and fully functional. Can’t wait to get the case so It’s not laying around naked!