Just wanted to give you a heads-up on a new Groovesizer kit. This one is called Groovesizer RED and it’s a 16-step sequencer attached to a granular synth. As with my other Groovesizer kit, this one is also Arduino-based and open source. The full kit is US$80 (shipped) and available from groovesizer.com 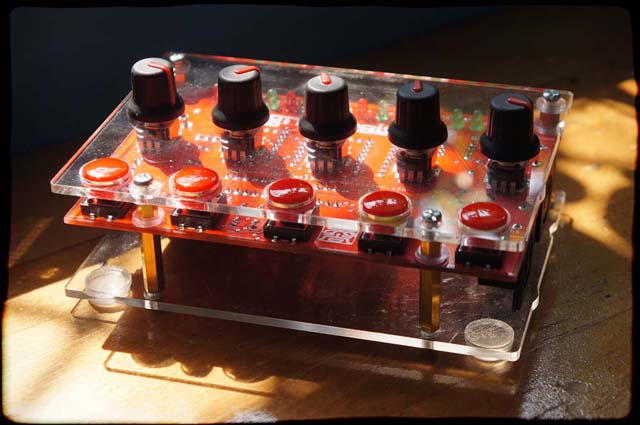 Features at a glance:
SYNTH

Not as such, but you can hear it in the videos up on the Groovesizer home page, as well on the RED’s page . The RED’s sound is pretty grungy and lo-fi - I’ve found uses for the raw sound, but it I find it also layers really nicely with whatever synth you like to drive with the RED. You can hear a mix of RED and a Volca Keys in one of the vids.

Ordered mine, and it’s on its way

looks like a cool little box - I love granular synthesis…

Hey moshang congrats with the new little bro to the Multiboard!

Keep up the great work with all the firmwares.

mmarsh Thanks a lot for the support. I think you'll have a lot of fun with it.Varthdader Thanks! I’ll definitely go back to coding for the multiboard after this. I need to bring over note entry quantized to scales to the Delta and Alpha. After that, I want to do ann x0x style multitrack drum sequencer.

I already had the midipal scale app after the grooveziser.

Got mine this weekend, built it, and it is really a fun synth/sequencer!