Great kickstarter product- but senselessly handicapped for the hardware market

For all of you that own countless music production apps on iOS like me: 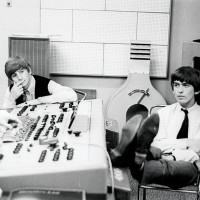 The PUC is a WiFi MIDI interface designed specifically for iPad & iOS devices. | Check out 'The Legacy Wireless WiFi MIDI Product' on Indiegogo.

Great product! One, MASSIVE flaw: It’s only midi out to the iPad/iPhone from a controller! Why on earth would you go through the trouble of making this device without having at the very least the option of making it in OR out? My guess: MIDI OUT from the iPad over wifi into the device and routed into other devices might be too laggy to be functional with the current device, so they left it out and hope they will one day be able to invest in more complex hardware and software. Fortunatley I have the iConnect MIDI 4+ coming in “the fall” which will hard wire over Ethernet into your router and solve this problem (and charge the battery hogging iPad to boot!). Maybe they want to occupy the controller niche only so they aren’t looked at as a competitor to iConnect MIDI? Who knows. But if it was open source (see, I’m learning from hanging around here!), I bet tons more interesting applications could be sequeezed out of the device. If anything, it could be used WITH the iconnectMIDI to allow you to control scenes, templates, sequenes on the iPad from your master keys. all the way on the other side of the room/stage.

It also makes me imagine a world where all your hardware has little wireless dongles (or you could buy a system with a base interface and as many dongles as there are channels supported) like that on it and midi cables are a thing of the past! A man can dream.

Wireless is tricky - because of all the regulations involved, it wouldn’t be feasible for small “boutique” companies to sell products following the standard.

One thing that does not make me dream is this:

Is it that bad? I’m a bit worried because I called a product of mine “incompatible with Windows” because of a 8ms latency time which I deemed unacceptable.

20ms latency is strictly unusable - with local off this adds to 40ms, how will you record something if you are triplett off???

And i get from my Macs way tighter timing (welll not BigC tight but usable) than what they have measured there… i would be p(BEEEEEP)ed off with 10ms Latency. Last time i had these values was when i tried to use a Novation Remote SL as MIDI Interface…

Just saw the Video - they dont measure MIDI Latency - they measure the latency of MIDI Out of the Keyboard until EXS24 running under Logic as a host responds via Audio.

Thats a bit like timing your 100m Sprint on an Aircraft Carrier Deck while measuring the Speed of the escorting Submarine.

BTW you can better live with a fixed 10ms Latency as measured for the cable transmission (which means it is 10ms behind which you can compensate for - but its tight in timing) than any random latency between 8.4ms and 6ms - this isnt wether fast nor tight. This is LambadaSync™

Wow. That’s renders it nearly useless for anything but programming synth aps. I suppose most iPad apps with MIDI are made to compensate for this, but 18-25ms latency is a lot to overcome for any live applications unless someone designs a perfect software sequencer ap that could legitimately allow the iPad to act as the central hub of your setup. All the FX processing aps that are coming out are great (and why I’d love to be able to take this little guy around to sync up FX aps to my exernal signals without constantly unplugging and replugging cables), but imagine trying to run a few LFOs and Envelope Followers with 25ms latency…it would take 20% of the iPad 2 CPU just to run one effect convincingly.

The iPad 4 on the A7X chip might solve some of these problems- as will the inevitable big-screen iPad they keep filing patents for. I’m not holding my breath for an Audio and Midi I/O break out box designed by Apple for the iPad over the lightning connector- or better yet- a single thunderbolt I/O independent of the lightning connector- but that’s a logical step in the right direction that would justify the purchase for a lot of professionals. I know GASP! A SECOND possible input/output on an iPad? Scary thought for Apple, apparently! Here’s a note to the Apple marketing interns that read every mention of the company on the web- you can’t prevent piracy and you avoided paying more taxes last year than than the gross domestic product of most NATIONS- if you make a dual chip iPad with a 14’’ screen that doesn’t appeal to anyone but Apple junkies and rich people (or gamers), you’re doing something wrong…

Why should a powerhouse iPad exist? For running a track limited versions of Logic Pro X or Final Cut Pro X, of course! Next: manufacture/design corresponding break out boxes appropriate for different types of audio production and video editing. Multitouch + a bigger screen has major potential in the professional audio and video editing realm. Would also be a great place to finally trot out the keyboard projector patent you licensed! Imagine parameter controls on Logic X being projected onto your table and fully moddable by just tapping and sliding on the table! Beyond cool.

Not sure - a single purpose device with the lowliest 8-bit microcontroller can have amazing latency scores. It’s more a matter of OS/driver design.

There have been rumblings over on Mac nerd forums around the web that Apple is taking the music applications on the iPad very seriously. Keep an eye out for the big iPad…it’s our only hope (of being able to find a consistent place for our iPad in music production). Why buy a digital recorder if you have a 128 GB 100% silent hard drive and 100x the processing power of tascams and zooms? The answer is inputs and outputs! Price everyone else right out of the marketplace and take over the field/live recording/production hub/audio interface markets at the same time.

second that, a PicAxe (known for its glacieresque interpreted Basic Code) running sluggish 4MHz can easily have a MIDI Latency of 1.5mS.

Its not a matter of Processing power, its a matter of the Software the System runs and obviously is iOS not suited for realtime Applications as far as MIDI can count as this by todays standards

They totally swear they’re getting around to improving it! Just as soon as they improve the iPad camera (that most people have forgotten even exists…why does it need a camera??) 7 more times, increase the screen resolution to the point that you can reach into your photos through a time/space rift and poke yourself 3 days in the past, and finally add the giant analog radial antenna so it can accept incoming FaceTime™ requests from scientists in Antarctica on a commercial.

I’ve tried to use the ipad live for various things but in the end I always failed to get it to work well. one time it’s a badly coded app, another time it’s lousy hardware.
a few examples: loopy is a nice looper but midi sync totally sucks, DM-1 is a nice drum machine but it has a totally fake midi sync feature. having any app use external midi sync will add a whole lot of jitter. to get most apps to properly communicate via midi you have lauch and kill them a couple of times until it works. I could go on for days. I like my laptop because it works.

We’ve had wireless lighting control for a while now. I’ve been waiting to see if someone would do wireless midi. It will be interesting to see how this goes for them in the long-run, but I am sure it will sell well to begin with.

in my experience a cable is still the best and most reliable solution. it’s also the easiest. just plug it in and that’s it. the simpler a technology the better if you ask me.

@fcd72 I guess they measured latency like this because it made their product look better in the graph.

Wireless is nice, but WiFi just isn’t the best way to get a very low-latency connection.

@thijs
Thats it, i guess the jitter Logic + EXS adds evetually cancel out the jitter WLAN adds so it looks overall better