Can anybody advise a good multimeter? I have a really lousy one and it’s really time to get a proper one. Is something like a frequency counter useful? Which other features does one really need on a multimeter (apart from the obvious ones, like voltage, current and resistance)?
thanks a lot
Hannes

There are a lot of good ones. The question do you want something with a ton of features or something super accurate? With reasonably priced stuff, it’s either one or the other, if you want both; get out your wallet. I use a couple different ones, I like the BK precision testbench as an all around meter with plenty of features at a good price. I have another less accurate meter that has convenient ports for testing transistors, capacitors, and even has a thermocouple input that’s really handy for quick and dirty readings. Finally, I have an old HP Agilent bench DMM (5.5 digit!) that I used for the REALLY precise stuff like transistor matching

frequency is good to have! someone on here recommended a really nice one maybe search here? you’ll see me replying about it. quite reasonable and very accurate.

Thanks altitude and oootini for the answer.
The BK precision testbench looks pretty good! Let’s see how far I can stretch.
I’m currently also looking at something more moderately priced like this one: http://www.robot-italy.com/it/multimetro-true-rms-bxm98t.html

this is the one I have. full featured and accurate enough for DIY stuff. http://bit.ly/13ry7ns

I use this one. And its RED!

one feature that is a must have: Auto off…

My BK has this and it’s a Godsend. Also, dont sell yourself short, find something with at least 3 decimal points if you want to do any sort of analog stuff, you will need accuracy at some point, the $20 and less stuff just does not cut it. We use a bunch of budget meters at work and I’d put their accuracy at about 20%. One other thing, a 10 year old used high end meter is a much better buy than a mediocre new one. I paid $150 for my HP that was made in 1986 and that device is in a different league than every other meter I own (it retailed at $5000 new). Meters are just like scopes, age is not an issue, if was good back then, it will still be good now

I’ve often been tempted by this Vichy AC97 model one, as its accuracy is good for the price (most of the useful ranges offer a claimed better than 1% accuracy). 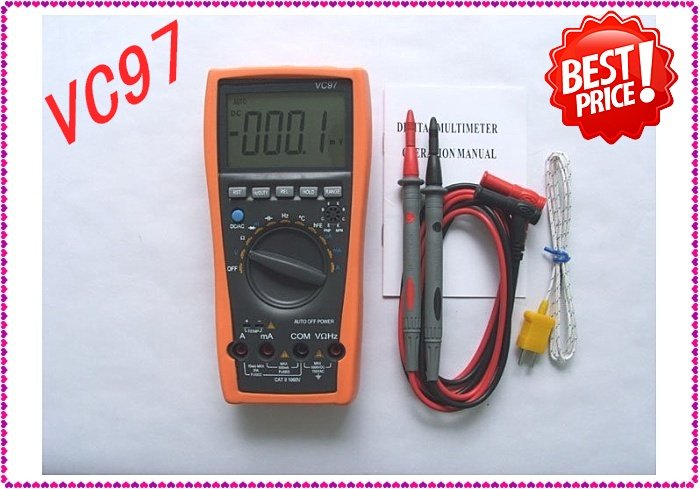 It also includes six ranges of capacitance (although lowest one is only 4nF, it ought to be adequate down to 100p or less), and hFE testing for transistors and the like.

thanks again for the info. I should have probably said a bit more about what I use multimeters for. I’m not doing much pro work and I won’t in the future either. I need the multimeter to calibrate modules (so relatively accurate voltage measurement is important) for troubleshooting tasks and for the occasional electronics hobby stuff. If the VC97 does deliver this I’d go with that, it’s really cheap and easy to find.

I just noticed that there is a lot of versions of the VC97, from different manufacturers… There a very cheap one from Vichy, a more expensive one from Victor, and one from Aidetek… I’m confused…

Anybody got this one?
http://www.youtube.com/watch?feature=player_embedded&v=IV6jXQQwNQs

I’m guessing that the most expensive one is the OEM, the rest are either clones, or stolen copies - Many of the chinese things that have the same model number are in fact the same item…

@rumplefilter
I have xactly this. Only annoying thing is the beep it emits a minute before auto off. Else its perfect. You should get some better Cables/Probes with it, something like this Set

@rumplefilter
Me too, never had any problems so far and can only recommend it.

cool! Reichelt has this on sale right now, so i think I’ll get one

oh yeah great! Let me know if you do.

Just bought a UT61E a few days ago after looking at some way more expensive models (Fluke) - needed something more accurate for transistor matching using Ian Fritz’s circuit. So far it works fine (except that the transistors I checked so far are so close that matching wouldn’t even be necessary I guess!), a lot of bang for the euro