I’ve been thinking about it for some time, I’d like to get rid of the laptop for live music.
Right now I rely quite a bit on it for launching loops, drum parts and as an effects processor. But the thing is I’d like to restraint myself a bit more, use less things and use them better, and try to see how far I can get without a computer.
So, since many of you have experience with this, the question is: do you have any advices for me, on how to handle this?
I’m condisering to buy a looper, to do some live sampling/looping of circuit-bent toys, I want to use the shruthis and the MIDIpal and some other synth, and last but not least I’m fiddling with some old tape recorders to create noise drones and stuff.
We’re a duo, so I don’t need to do everything myself (and maybe my mate will still use the laptop), the genre we make is oriented towards noise/experimental electronic music

Ive been trying to get away from computers for a few years, but youll end up using lots of gear: 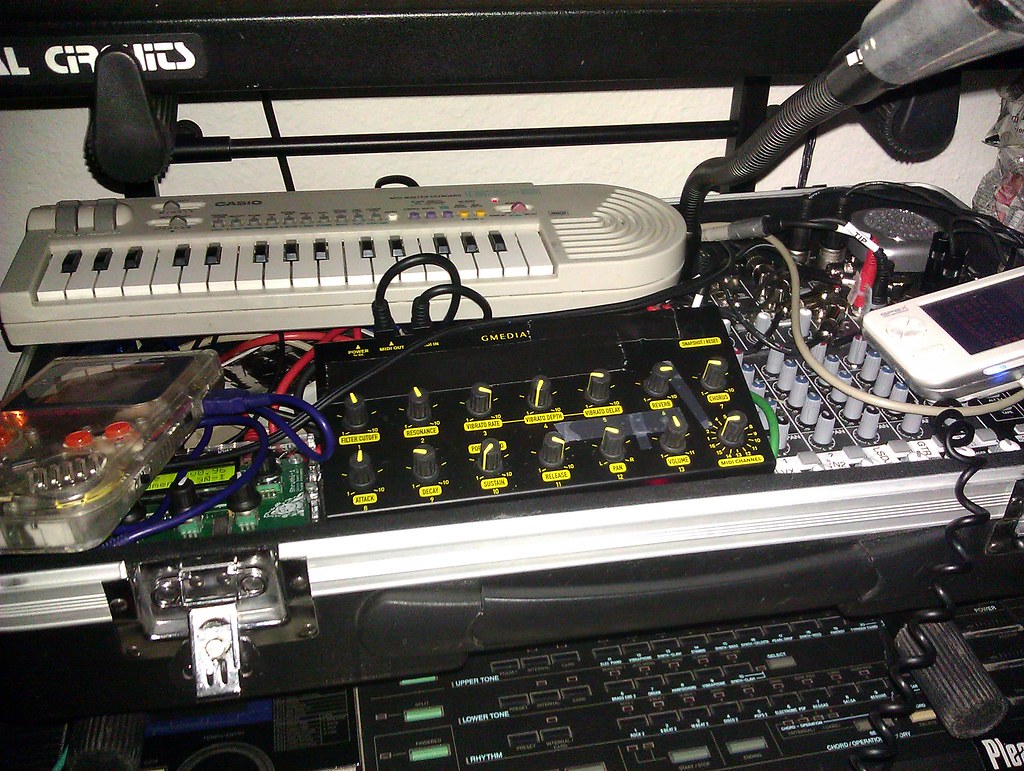 I have
maxckie 802vlz with fx send.
Send goes to a timefactor which handles the loops and fx
sequencers are littlegptracker and a hacked littlesounddj that sends midi

Littlegptracker is pretty simple, and the outboard effects and gear make it sound big, and it crashes slightly less than a computer would. Still looking for a next gen su-10 replacement. Its basically endless tweaking.

Instead of constraining the devices, maybe jsut constrain the workflow? Use something like plouge bidule or energyxt and force yourself to use only a handful of presets and fx racks? My big problem with laptops isnt really the overwhelming options, its the barrier i feel its screen puts between me and the crowd.

Im just about thinking the same, albeit not for studio use. Just remembering the fun i had with the MMT-8.

Have you taken a look at the MPC-1000? Its a Sequencer and a simple Sampler for your loops…

I use a workstation for studio production but no laptop on stage.

Be aware that the MPC 2500 is great for live, but a pain for home studio production.

A friend of mine, fan of analog vintage synths and drummachines, uses a sequentix P3 and doesn’t have any computer to produce his tracks.

@herrprof: thanks a lot for the suggestions. I agree, there’s a lot of gear involved if you don’t use a laptop. But we have that problem already

see here: Kurodama vs. Ubumaic live
About the barrier thing. I agree, but I solved that by usually putting the laptop somewhere aside (when it is possible) and interacting with it just through controllers.
Maybe you’re right… maybe it’s all about the workflow. It’s just that I sit in front of computers enough already and I am a lot more focused when I can avoid them.
btw. how’s the time factor in your experience? I’m considering to buy flo’s unit… I’ve been wanting that box for some time now, my only concern is that it’s just got one looper track (I thought it had two… but my memory is playing tricks on me) and you can’t use the effects when it’s in looper mode (since it handles it like just any other effect).

I was thinking of the MPC1000 too, but one other thing you might want to consider is an iPad. I know, it’s a computer, but it may integrate better into a music workflow and doesn’t have quite the same computer “feel” in a music setup. I use an Alesis IO Dock for an interface, which I’m happy with so far. That gives me MIDI in/out and stereo in/out.

Thats right using the looper means you cant use it for fx. That being said its amazing sound and the midi spec is super flexible when you have to control everything as midi. You can also use it as a midi controller of other fx down the chain, and as a tap tempo clock master.

Build the MIDIBox seq4? or the seq4 lite?

wow, funny,im literally 90% there in going omputerless. Sold the lot, bought a huge old soundtracs desk for peanuts. going completely computerless at all times. Going to get a 24 track digital recorder, hd24 or similar, and run everything off the boxes live. done a load of stuff like that recently, heres my spamclound http://soundcloud.com/paradigm-x/sets/the-truth-hz-live-acid-house/

im absolutely buzzing off it, best decision ive made in years, jsut got so sick of mice and screens and automation and infinite options. hardwares completely amazing.

seems a few more people are too, cool ;0

Seems like I need a good sequencer of some sort. I know the seq4, but I’m out of DIY (for several reasons) I might get a Doepfer Dark Time or something similar one day…
herrprof* great sound, that's what everybody told me, I haven't heard one live yet, but I guess I can't go much wrong. From the demos I've heard I really love it. My other option right now would be a Boss RC-50, which is one hell of a looper (3 tracks in stereo) but it's really big, and I wonder if my money isn't better spent in something that is also a superb fx unit. So I guess I'll try the Eventide. *piscione yeah the iPad. Actually I find it an interesting solution, it’s also quite small and the touchscreen makes for a nice gestural controller. I have a bit of a strange relationship with it, you know, I would feel like a wannabe hipster with an iPad on stage, because of all the hype it got. But i agree, it might be a solution.
@Paradign X: yeah several people here on the forums adopted a computer-less approach, that’s what’s inspiring me. Nice to see you have made the “jump” too. I think the “doing it on the spot” is what makes it great isn’t it?

yeah it actually feels like making music, or ‘performing’, which does make me cringe s little. (the word!)

spending hours microediting breaks is over for me.

and crappy old reverb boxes and delays have so much character and grit.

ive got a qy700 i havent tried yet which is meant to be the bees knees formidi sequencing, pretty cheap too. ive also got a klee sequencer pcb set but that will take me a long time to build, will be nuts for acid tho!

I have not used a computer for years, the downsides are more than made up for by the advantages, right now I’m using a combination of an Octatrack and MV8800 for any audio/sample requirements, and some analog synths, drum machines and various ‘toys’ - little noise makers, iPad, Microkorg and my modular.

MBseq v4 here too. But, I use both gear and computers/plugins. Depends on what I do.
The v4 can’t go wrong.

@rumpelfilter
i have an unused qy300 flying around which is - besides the cheesy AWM GSM sound generator - a pretty good hardware Sequencer. If you want ill ship it for evaluation purposes…

the problem with the mb seq is the waiting list… I’m on it since november with no news… But in kit, will be very handy.

always wanted to try one of this qy! seem powerful!

or my suggestion: buy me the mpc AND the timefactor! ;0)

or, if you have not one, a standard elektron unit like monomachine mk1 or MD mk1 can be found for very good price now. You have a serious seq, ( lack the ability ro record phrase on a keyboard for the md) Pretty quantized (xox seq) but powerful with a special concept of automation. You have effects, and can mix in 1 stereo or two mono synth…

For the md, be sure of tweaking it for some time if you choose a non uw (no samples) it’s realy powerful already if it suit your needs. Can found mk1 md under 500 euros i think .

i have read that the delay on monomachine is great, never tried it.

I have bought a MPC mainly for the seq, but too lazy until now to learn it., although it seemed pretty simple. ( i read 1/3 of the manual. Was able to easy record cc moves and melodyes in an hour)
Lazy to enter the world of sampling too. it remind me computer. What i like with hards synth:
Just turn it on, even for 5 minutes. Not possible on a computer…ever end up at many hours spend.

I was pretty curious too about the EMU COMMAND STATION series: seem to have a lot of control, never tried one, maybe great fun for seq???

About the MIDIBOX SEQ, which seem impossible to obtain, there is the lite version, which seem to be great and is available at smash (cheap too)

CIRKLON/P3 to see on the expensive side.

sure i think the elektron seq is more limited i think, but you fully run it in the first hour you have it, it’s a model of fun and easyness. lot of lfo can be send on cc.

One more thing that i want to try one day and pretty cheap: YAMAHA RM1X seem to be a real great seq… Some common point with qy?

More and more i think i will only buy gear with integrated pattern seq.

In conclusion, if i lost my machinedrum, i will definitely not have the money to replace it, and would go a try for a rm1X for seq and a novation drumstation for drums.

today, although i never really use a computer, but already know how live work,i have decided to seriously partially integrate a computer and just keep the md and some diy synth shruthi, 6582 and future anushri), a basic soundcard ( echo audiofire 4)i will just stick on the live lite version i have which will serve me as multieffect and keyboard record sequencer.
pretty compact solution…

Yamaha RM1X can sequence external stuff too, but only one MIDI out though.

@flo: Have you seen that SmashTV now sells the Seq PCBs in his shop? You will have to find all the other parts yourself, but it beats waiting. I have ordered everything for mine and am waiting for the PCB to arrive.