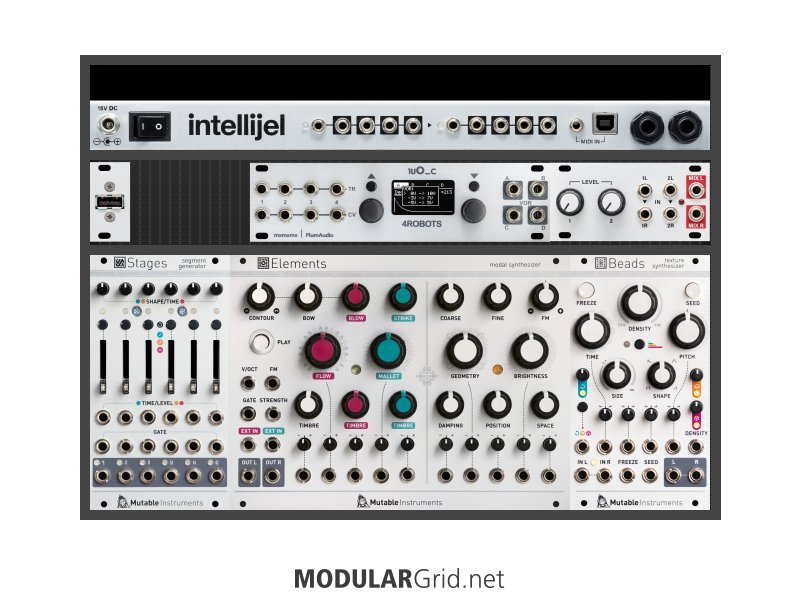 The link above is to my proposed system, which I feel is well thought out, and aligns itself with Émilie’s suggestion to

"If you don’t know how to start, just do this:

I am open to thoughts, critiques, advice, anything and everything.

Thanks in advance for everyone’s time and efforts.

Somehow I would replace Elements by Plaits + Rings + Ears.

Plaits as an exciter source for Rings, Beads making rough grains to excite Rings, tapping on Ears to step through sequences on Stages…

I appreciate the suggestion from the creator themselves! I have to keep my financial constraints in mind - have found a used Elements at my local shop for the cost of a Rings.

But it is exceedingly difficult to not heed your advice!

I’ve been having a lot of fun with Elements and Beads.

If I were you, I’d probably get rid of the noise tools tile (you can do everything with it with the expanded qiemem stages firmware, I think), blank, and vca (which you can also do with the qiemem stages firmware, I think). and replace that 28hp with a quadratt. This would allow you to take advantage of a dual stereo voice with elements and beads in wavetable mode. As well as other forms of mixing.

Thank you for your input! Was not aware of an alternate firmware for Stages.

This forum is an excellent resource.

No problem. I’m newly exploring that firmware, but it has been nice because the extra functions stay out of the way unless you need them, and I think with a small system like this and just a handful of modules to learn, it won’t feel as overwhelming as if you have tons of modules running the big expanded firmwares. 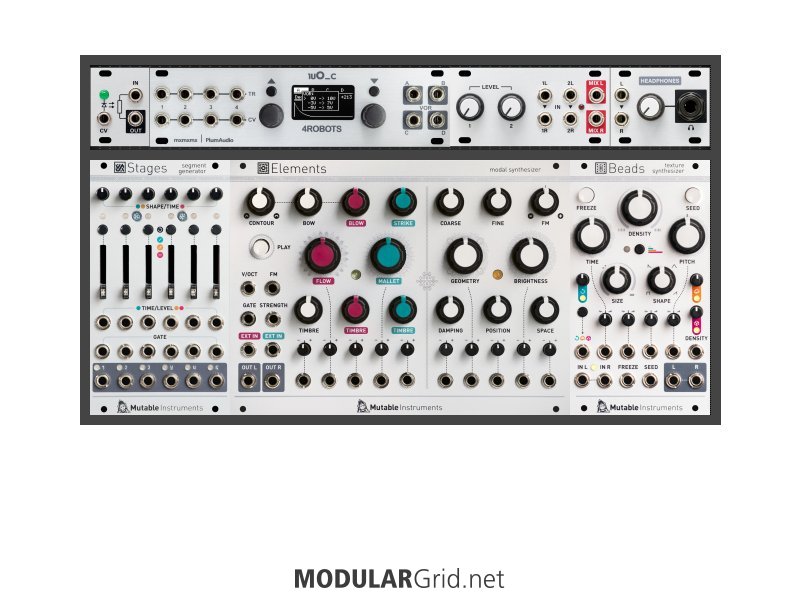 i concur with Émilie, Plaits does work really well as an exciter. The character is a bit different though, plaits and rings will give you a brighter, more hifi sound whereas elements has a somewhat darker, rainier sound with a bit more mystery. I dont mean darker in an audio quality sense, it can produce crystal highs. I mean darker as a tad more brooding and introverted.

I like both combinations but ended up going plaits + rings + beads as well in the end since it is the most modular approach.

One thing to keep in mind is that plaits doesn’t have a “strength” cv input. Elements has a very dynamic velocity range via this input and you need a vca like veils in between plaits and rings to recreate that although i am not sure if it isnt also subtly adding some exciter bleed and modulation of the brightness? The response curve of elements vca is probably exponential but knowing Mutable Instruments, it might be something exotic or unusual instead.

finally, keep in mind that rings is not true stereo if that is important to you.

By the way what is the right way to pilot elements from ears ?
I tends to multiply the env out of ears into Gate and strength to elements : to have dynamics and also because with the gate out of ears on gate of elements I miss some « quiet » enveloppes below the gate treshold.

There’s also the out of ears on cyan ext in if we want ears as exciter or in magenta ext in (+ the env as above) but my question is mainly about the ears env/gate with elements.

If I am to understand the Quadratt as a stereo mixer, I would take the left channel of both, say, Beads and Elements, into inputs A and B, with the right channel of both into C and D. That would give me a combined left in output A, and a combined right in output B? And the signal is sufficient to drive headphones, or go out to monitors? Moreover, if I were to need strictly it for its audio mixing capabilities, what advantage would it serve over the Stereo Mixer tile, which frees up 12hp?

I also think I can eliminate the FSR by going with a 0 Ctrl, which seems to be quite expansive in its possibilities.

Yes (but outputs b and d). Loud enough to go to the headphone out or line output module. Direct connection not so sure, and I think depends on the monitors/headphones

I also have discovered that the Stereo Mixer can also connect to the 1/4" jacks on the front of the Palette, hence making a three channel mixer. So as long as the output of the Mixer can drive go headphones/monitors, that seems like the most cost/space effective way to sum up Beads, Elements and Stages.

Do you mean to add the 1/4 jack of the case to the stereo mix as an input ? I understood that you can connect it behind as an output and use your stereo mixer as a master (but with two knobs not real master). But perhaps I misunderstood.
As I said in my previous message above you can dismiss the headphone 1U with a Y.

Yes, the Intellijel Stereo Mixer 1U tile can be connected using the 1/4" jacks as a third stereo, unbalanced, unity gain input.

I resolved my issue by getting a small pair of monitors that have a headphone jack as well.

However, should I wish to emancipate myself from that work around, then I will certainly use your Y cable suggestion. Having plugged headphones directly into Elements, and it working, gives me confidence that will work. Now, to find a passive in-line volume control to place between the Y-cable and headphones, that would be ideal!

Having plugged headphones directly into Elements

Mmmm no. Don’t plug headphones into modules. They output high-amplitude signals and are designed to drive source above 10k. If it worked, it’s only a bad coincidence (the impedance of your headphones causing just the right attenuation).

Is that true also after a mixer module (like befaco stmix) ? And the hand ready to fade out in case of high amplitude ?

Right now I have to make a smaller case for a mobile project and they aren’t line output in this case and not line output modules in stock at my local shop so I plug momentarily to practice my headphone after the mixer with an Y (usually I put it from the line output of intellijel case).
So I’m struggling with modular/line/headphone level.

Is that true also after a mixer module (like befaco stmix) ?

Yes. The standard practice when you design a Eurorack module is to add a 1k resistor in series at each output stage (or you insert it within the feedback loop of the op-amp, if this is a precision circuit that cannot tolerate any voltage drop, like a pitch CV output). This prevents the op-amp from having to generate too much current (possibly leading to its destruction) in case you accidentally patch another output to this output.

This value of 1k is chosen based on the maximum amount of current an op-amp can source without. It is acceptable because a typical Eurorack input has an impedance of 100k, causing only a tiny voltage drop. But if you plug headphones with 16 ohm impedance, it’s pretty much like shorting the output of the module to ground. The op-amp will still be protected, but it’ll be pushed close to its maximum current capacity. And obviously, output amplitude will be entirely dependent on the headphones’ impedance.

The requirements of designing a good Eurorack output stage, and a good headphone amp are total opposite. If I had to do it, I wouldn’t use the same parts and the same circuits.

So unless it’s designed to actually be a headphones output, one shouldn’t expect nice things to happen when you plug headphones there.