Hello everybody!
I have a Bassboy that is only controllable via midi CC.
That is not so very fun so i want to get some pots and switches to increase the tweakability.
The brains behind the bassboy has constructed a controller named Ten-O-pots but its not yet for sale.
Could you guys suggest any product that could do the stuff the Ten-O-pots do?
Of coarse i want it to send all the inspired tweaking CC stuff to my DAW.
What to do?

Thank you in advance

MidiBox, but it’s not exactly newbie-friendly. You have to read-up before people there warm up and can answer your questions. The right way to do it would be to read, design something like a core, and AIN (for pots) or a DIN or directly connected encoders to the Core_LPC and then start modifying the correct app. The ask someone to take a look-see.

midibox lc which is really fancy i guess

or some other full diy one possibly arduino based

i guess there is a lot of possibilities, depending, who fancy you want it and how much work you want to put into it.

Yo Jazzdoktorn - drop me a line i need beta testers

midibox 64
you just need a few digital tact switches and a couple pots to control it.
pic CORE , AIN, DIN for control, maybe DOUT for some LED fun.

Thanks for suggestions.
The midibox is probably too big project for the ten pots and two buttons.
The prebuilt i the way to go i think…
Something retarded monkey proof is good enough for me.

Isn’t the MidiPal able to do this if you add a bunch of potentiometers to it?
It seems so from the description…

too big? it’s maybe 25€ plus a display plus the pots and buttons.
ah and psu and a little case. actually just 3 little boards if you don’t need LEDs. maybe you can even waive the analog in, don’t remember how many pots are used in the bassboy

what could be easier than this? 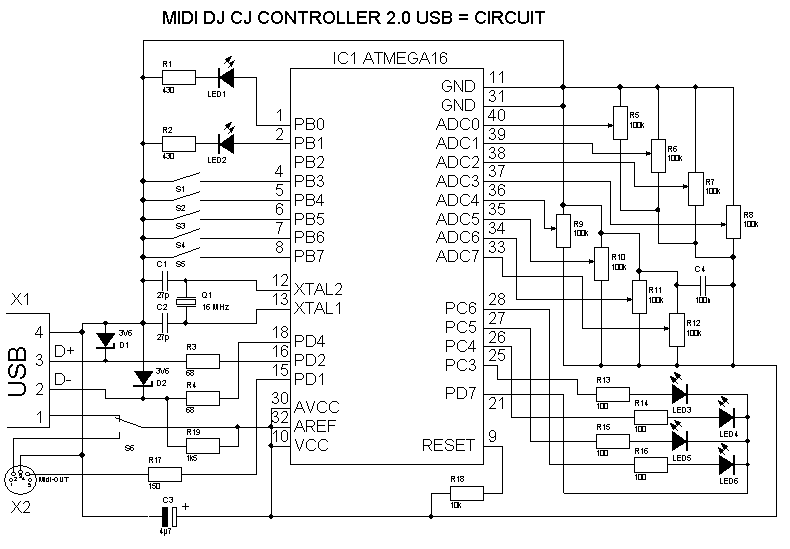 You could try the Highly Liquid Midi CPU

I am working on the simple code for my Bassboy. It has like 11 CCs, and you could then matrix in some buttons for a small keyboard (x0x style!)

@n8bit: The Highly Liquid Midi CPU is an alternative.
Is the code hard to fix or is it “plug and play” (ish)?

I might put this in a spare rack, so i think it is best to not involve usb.

Midi CPU is easy-ish to use, and you’ll get a lot of support on the forums if you get stuck with the code. I like it.

yes it’s basically the Core V3 you need plus a PIC18F452
one DINx module for the tactile switches and probably one AINx module for the analog ins (if there are more pots in the bassboy than the Core board by itself can handle, maybe it’s 2 or 3 more, idk right now)
a normal LCD can be used, but is not necessary (good for troubleshooting still)
and you can adapt firmware and everything to exactly what you need.

regarding the USB you can make your own GM5 USB-MIDI interface. don’t know if there are pcb runs going atm, but it’s so small that you could make it on perfboard (and a little adapter board for the Atmel chip)

edit edit edit edit:
schrab’s solution looks very simple too. i mean the bassboy is after all so small and cheap, and this one looks as if you can hack it together in an hour on perfboard

@fcd72 i have a Miniak i kinda want to do the same project with, can i drop you a line as well(pretty please, with unicorns on top) ?

oh thanks Lindeborg, i wasn’t aware of another run going on. i need to monitor the forums more oldschool again
edit: hahaha i’m already on the list. must have been a while so i couldn’t even remember

as far as i know, there are a few kits left - url in the page above. teensy based dual led push button encoders. each knob press selects a different bank of 8 cc knobs - 64 ccs.

rosch Yeah I know, defining slow. That's why I thought some advertisment here wouldn't harm.oootini How much did the kit and material cost for the “Eight”?