Yups, i have 3 of them and you can put out heavy CCs on every of the 24 Ports without issues.

Oh, a DAW that can do MIDI. Groundbreaking.

I have been using Record, and later Reason when they merged the two products, a lot and I really love it, but until now I thought that it had one really major shortcoming: the lack of midi out. That’s the reason (no pun intended) why I either seesaw between Reason and Reaper, or route Midi through a MOTU micro express outside of my DAW. For me things seem to be about to become a bit less complicated.

Hehe ! And it took only about 12 years to implement it

Finally! I’ve longed for the day when there would be a DAW that’s as easy to use as Reason that also does MIDI. Now there’s only the thing with some VSTs that may or may not be must haves, then one can see Reason as a fully featured DAW and get rid of any other old cruft.

@Jo: try Studio One. I personally still stick to Logic, but who knows now that Ardour 3 has MIDI support there are rumors spreading that Harrison Mixbus will soon too. And then…maybe…

^
For midi, no thanks. The worst performance of any DAW next to Ableton. I did some testing of various midi USB interfaces in various DAW packages using an external clock to measure jitter and latency and the DAW had as much to do with the performance as the interface did. S1 although being cool and new, simply does not perform nearly as well as it should

Thx! I was giving up hope of any of the big ones except maybe Ableton. Apple doesn’t seem interested in anything that is deemed “pro-users” or anything outside of iOS, so I’ve given up on Logic.

Ardour, maybe, if I have time to work with Linux… There’s always Reaper and the upcoming software I saw a couple of months ago. It had some funky way of zooming and putting everything as leaves on a timeline trunk. Forgot the name, it was from some smaller player. Edit: It was AudioGL and Bitwig.

@Altitude: So, which was the best in terms of latency and jitter?

That’s always the same - historical reasons. As it is with ProTools/TDM, these always have been pure audio DAWs and MIDI came much later and always kinda glued to the rest…so it is with S1 and Ableton really is worse of all. So i do not think Reason will perform much better. Hopefully Ardour will, we will see.

@Jo: be sure Logic X is in the making, my problem with that is for heavens sake they hopefully do not the same crap as with Final Cut X…

Cubase, GM5 by a long shot (on a PC, dont deal with those apple things)

Interestingly enough, the whole “midi timestamping” thing is complete marketing bullshit. I tested Steinberg MIDIEX interfaces using their drivers in timestamp and not timestamped modes and the real world results were no different. This was all done with a midibox core8 with the midi performance app…

Here is the spread sheet of my results, the “core raw” data pretty much represents the time it takes for a midi message to be sent out from interface to the time it is received back in (I plugged the midi out to the midi in on the core and ran the test) 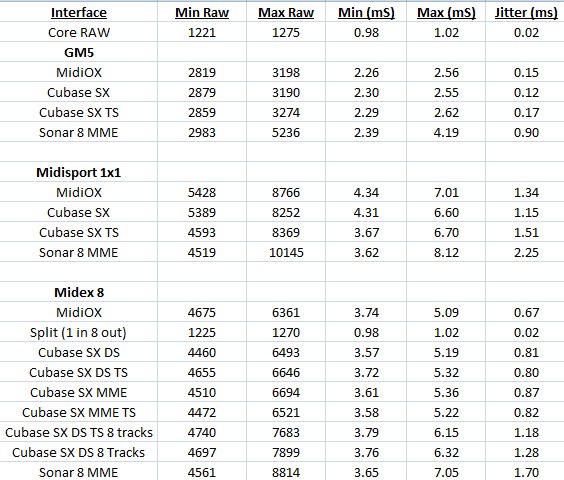 That’s a very good and useful table. I was living under the impression that Cubase is old and creaky. Then it turns out that’s not quite the case. If only the workflow in Cubase was a little more streamlined…

Nice to see that the GM5 eats all the others (except copying traffic from port to port on the Midex8) for breakfast. As long as you don’t need a patchbay… Then again, TK said that one could easily use the LPC17 core plus the built-in MIDI router for any such box, it’s just that nobody has aimed that low. Yet

The split is simply a hardware thing so its just there for reference, it does not really reflect actual performance (its the same as the loopback core raw test). I was really surprised by the results as well. I didnt think the software made as much of a difference as it does. I also tested ableton 7 in these tests but the results were so bad that I didnt include them

I would be curious how the AMT-8 / Unitor would compare when used with Logic. Personally i have the feeling this combo is pretty tight even under load because its the interfaces Job to crank out the Notes at exactly the same time. Not as tight as the Big C but pretty much the same league. Thats my Problem with Ableton… it sends out MIDI whenever it likes.

My ear tells me that my Unitor and Logic play tight

I’d be really surprised if the Logic stuff wasn’t at the top. Cubase and Notator both come from the same Atari/C64 background where it was ONLY midi. I still wish someone would step to the plate and put out a proper PCI-E based MIDI interface. USB is convenient but is too easy to get wrong, The glacial speed of midi compared to modern I/O speeds makes it tricky to get right when the buss is pretty much waiting around 99% of the time for data and poor latency and jitter is the result. There is no real reason that it can’t be sample accurate

Thats what mine tell me too, nightworxx. And then there was a totally new Level…

The Unitor/AMT feels even good when it is under full load, compared to this MOTU and ESI crap.

I had 2 AMT-8 interfaces at one point, and on a Mac, they couldn’t be used at the same time, at least not separately connected via USB. Data supposed to be for one interface would come out of the other, and vice-versa. I eventually gave up, sold one of them and replaced it with a MOTU 128, and all is now well. Not that I’ve got into measuring MIDI latency etc.

Yups, there is only ONE USB Connection to a Master AMT Device, all others have to be Daisy cheined via RS-485 (or whatever RS it is). Works absolutely Flawlessly this way, and better: you can buy cheap USB less Unitors