me and my band are currently looking for creative devices to shape our sound. Sonically, it’s (supposed to be) inspired by the likes of Pink Floyd, Depeche Mode, Brian Eno, Radiohead, Tame Impala.

Being an old shruthi user myself, I always kept MI in mind. Given that we’re trying to forge a sound that contains many unusual and unpredictable ambient elements, my attention has shifted to clouds and its demos left me absolutely amazed. However, given that we’re still students our budget is rather limited and we’re quite stunned how expensive basic modular setups are.

1. What is the cheapest way to run Clouds as a standalone device?
2. BTW: Given that many experts are around here. Could you maybe drop some names, what are interesting and bizarre synths/devices/effects to look into when making experimental rock/pop music.

Thank you and have a nice Sunday.

And something to modulate Clouds too !

Forget Clouds and just get this: 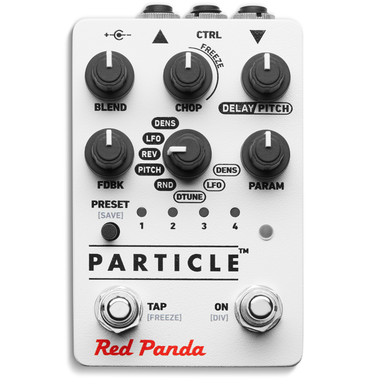 (Copied from the Mutable Instruments FAQ)

I don’t have a modular system but am interested in Clouds. What do I need?

At the minimum you need a case/enclosure, and a Eurorack power supply. Clouds accepts line-level signals, and outputs modular level signals which are accepted by most mixers or audio interfaces if their sensitivity/gain setting is set to the minimum. No need for an “audio interface” or “output” module.

Clouds is not a standalone FX unit, but is instead a building block for creating effects. Without external modulation, Clouds will play all its grains at the same pitch, position and size, resulting in a muddy mass of sound. For example, an interesting application of granular synthesis is to create an effect of swarm/chorus by randomizing the pitch of each grain. To achieve this, you need to patch a random signal generator to Clouds’ pitch CV input, and greatly attenuate the random signal so that its amplitude is only a few mV (to get only a few cents of random detuning per grain). Another application of granular synthesis is to slowly “scrub” a segment of audio, producing a result similar to extreme time-stretching. To achieve this with Clouds, you need to patch a slow ramp LFO to Clouds’ position CV input. The minimum and maximum voltage of the LFO will control which segment is “scrubbed”.

While Clouds and a few external modulation sources would work well to process signals from your DAW, we would like to emphasize that Clouds works at its best when processing sounds and sequences produced by a modular system. Why? Because you can route all the clocks, or envelopes or LFOs generating the sequence to Clouds’ CV inputs, to make Clouds’ parameters evolve in sync with the sequence. This kind of synergy cannot be achieved when processing external signals. Without a serious commitment to modular synthesis, we recommend alternatives like the Red Panda Particle pedal, or software plug-ins.

you’ll probably need an extra module to match Eurorack audio levels (at least for input, output only if your destination distorts too easily);

If you have a pedal that send CV / env follower, you can use that as a modulator.
I had some fun running a guitar signal into a moog ring modulator, an envelop follower, then into Clouds, using the ring modulator and env follower outs as modulation source for clouds

Standalone Clouds is quite the opposite of “unusual and unpredictable”.

Anyway, what are we talking about? Is this for Live purpose or studio/recording only, or both? What exactly are you planning to feed the audio input with, what sounds or instruments do you want to process?
I think it is important to remember that if you want to shape or augment your sound with effects they probably need to be operated. You can get some wild, unpredictable and pleasing results with a standalone Clouds, but you needed both hands being ready for some dedicated hardcore wiggling, otherwise it’s very likely just the opposite of interesting, experimental, bizarr: lame.

Last and least if you wanna go the standalone Clouds route and know somebody who is an electrician (Danger! High voltage current!): super low cost DIY standalone solutions for Clouds are of course possible:

I’m glad this is retired.

I second the Panda Particle and/or a Freeze pedal if that’s part of what caught your attention.

You might get more for your money by buying a really good delay. It would work with all your equipment without having to adjust for modular voltages. I think eventide has a delay that does granular stuff.

There’s a lot of fun to be had with Clouds, just manually tweaking the controls.

Obviously you wouldn’t be able to do that while simultaneously playing guitar, though.

Clouds was my second module, after the Tiptop uZeus (power supply). I processed my MS-20 Mini (and other things) with it, and used the VCA in the MS-20 Mini to attenuate the output to go through a small bass amp. I found it to be very cool just twisting the knobs, but when I added Peaks and Veils (which was after picking up Braids) it “cracked open” (greatly improved) for me. I was using the the LFO outs from the MS-20 Mini with success, but engaging it as a modular component (part of a system) with a variety of options continues to inspire me. Part of me thinks you should go with the pedal Oliver recommended if you aren’t wanting to go “full modular”, part of me thinks you should be able to make a statement that doesn’t rely TOO much on specific gear (work with limitations for awhile), and part of me really appreciates your desire to find a way within reasonable means to go after the sound in your head. I trust you to have fun in the process and ultimately do what makes sense for you in the moment, to move your vision forward.
Best of luck and post something here with whatever you end up doing!

Thank you for all your interesting replies!

Too bad modular is such an expensive/complex hobby. Seems like I won’t be able to avoid getting into modular at some point haha.
We’re talking about studio purpose btw. Right now I’m now I’m thinking of spending my first salary on the

As for other gear. If you know any devices (including modules) that generate weird sounds(scapes), let me know! Addicted to new, random and weird sounds

Cause my humble criticism on contemporary music is not necessarily the quality of the songs themselves, but rather dull, uninspired, yet water-proof production techniques using the same xylophone/flute sounds to death.

Thank you very much!

Do you think the Moog would make for a reasonable, yet effective modulation source for Clouds?

A mother32 is certainly not the first thing that comes to my mind when I think of modulations. Why this choice?

Maybe you could get something with some lateral thinking… Treat the audio outputs as another noise source? Use the sequencer at a fast rate (but how fast can it go?) to create harmonies? In any case you’ll need attenuators…

A couple of thoughts. If you want to check out what you think of Clouds (both with and without modulations sources in the mix) you could do worse than using VCVrack.com as a testing environment before you spend your money.

Secondly if you do decide on a minimal Clouds plus mod source plus powered case as a set up - what about getting someone to build you an Ornaments and Crime as your modulation powerhouse? It’s amazing value. You’ll still need some attenuation in there in a separate module, so as always the modular route won’t be really cheap but O_c provides a lot of CV sources for your buck.

Take a look at Hologram Electronics’ “Infinite Jets”. I would agree that Clouds isn’t all that great by itself as a guitar effect box. However, processing other sounds using manual manipulation can be pretty useful, so I wouldn’t rule it out completely.

My first eurorack dive was based on a Clouds, and I got the Doepfer mini-case with an MST stereo out kit, and ended up getting two Ears modules for stereo preamplification, and the envelope and gate outs are useful as modulators as well. It was a good start, though I’ve since added a lot of other stuff at this point. The Clouds, two Ears and the MST output module just fit in a mini-case.

I have a Red Panda Particle, and I like it, but it’s no Clouds. It may be more useful than a stand-alone Clouds with guitar though…

Hi, any updates on how you decided, any experiences you can share?
Cheers