Cheap and not terrible options for speakers?

I hope this is remotely the right place for this. I’m looking for recommendations as to just what to hook my Shruthi 4-Pole Mission up to, soundwise. As is, I have a little portable speaker that’s intended for an MP3 player, just sort of had it lying around, and as expected, it’s positively horrid at anything below a C3. I’m not a professional musician, I’m an amateur noodler, so I’m somewhat hesitant to blow $300 on a set of studio monitors or the like. Anybody have any good ideas on something low budget that isn’t entirely terrible? Thank you kindly.

Do you want it for Studio use as Monitors or for PA to play live.

For Studio use this is where it starts getting usefull.

As far as it gets to speaker i highly advise you not to buy anything trashy, better wait and get something good. Its the singe unit that converts your Music into something that you actually can hear - so no compromises here!

these are pretty cool. they’re not monitors though. 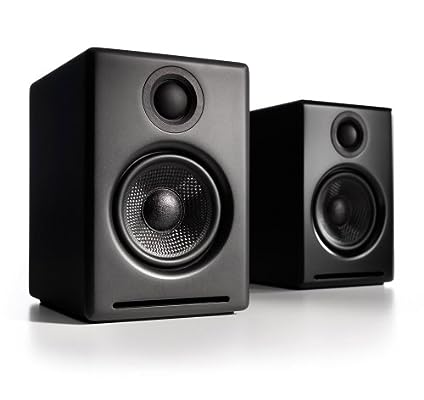 Audioengine 2 (A2) Premium Powered Desktop Speakers is the new standard for multimedia sound and closes the gap between computer speakers and home audio. Audioengine 2 is the perfect upgrade for your ...

Less studio or live, more something to screw around in the living room with. My main requirements are basically cheap with reasonable fidelity, I don’t intend to be mixing on these, I’m just poking around for something I’m not going to blow out in 5 minutes, that doesn’t sound like I gained a fuzz pedal I didn’t know about somewhere along the lines. Volume isn’t that big a deal, it’s largely for practice. As a musician, I’m a beginner, and am my own audience outside of a few friends I’m comfortable enough to share things with. Also, kind of broke. I do appreciate the help. Have been vaguely considering a set of standard desktops, but I keep wondering if I’m going to burn them out. Have also went and looked at one of the devices that follow this wall of text. Thank you once more!

Unlike pretty much any other bit of music gear, this is something that you can keep with you for decades - the technology does not improve much, it rarely fails, and once you “learn” how things sound through a particular type of monitors you certainly don’t want to change.

So you have the choice of paying something worth $100 now and throw it away if you ever get more serious about music; or get something you’ll be able to keep for years (can be as “cheap” as a pair of HS5 or ROKIT 6s).

If you really want a budget solution, I’d recommend this - which is the “mobile” rig I take for fairs/demos:

If you are OK with an Amp/Speaker combination i also can recommend JBL Control 1 + any noncrappy Amp you might already have. Albeit together with an proper amp its not cheaper than the Behringers i mentioned above…

Hm, it’s something to think over to be sure. I think I’ll just have to save up, expand my budget. Best case scenario, I have sound quality to grow into, worst case scenario, I’ve still got something decent. Thank you kindly all! As an aside, I actually have a Xenyx 802 in my whatsit box. Love the thing, got a good deal on it and use it for volume control and for the FX send, as I have been noodling around with FX kits, put together a digital delay a ways back, and use it to mix in the little BleepDrum I put together, and metronome and whatnot. Sort of have everything built into an old hard suitcase, attached via the hardcore variety of velcro. Gah, I ramble. Thank you kindly everybody, I appreciate the time you’ve taken!

If you’re okay with headphones, those Superlux ones they’ve got at Thomann for example are dead cheap (30€) and mine are still mint after 4 years of very rough and frequent usage. They’re coming from the same manufacturer that Blaupunkt has been using and imo, they sound just like that. Come with a 3m wire too.

Otherwise, 180€ was my lower limit for the price tag of real speakers. Pretty happy with my Esi near05. Although everyone says otherwise, those 5" speakers do have some decent punch in the lower frequencies if you want them to.

i use to have the B2031A but changed to Esi near05 most for saving space than other thing, and in my room place the 5" are enough, also a xenyx 1002 and the fostex T7 do the work for my needs. the only thing it’s i’m running out of channels on the mixer…

I recently got a pair of Q Acoustics 2010i speakers with a Dayton Audio DTA-100a amp. Excellent sound for a very low price in case you don’t need a lot of output power.

I have the 8" Behringer passives. Pretty decent, big and heavy. I use a Yamaha hifi to power them.

Of the suggestions so far, speakers from the AudioEngine family are the ones I’m most likely to recommend. Their crossover is relatively well-designed, so you don’t get tired as easily as with many of the competitors.

But does it really have to be stereo speakers? Since the Shruthi-1 is a synth with mono output, why not go for just a single mono speaker? The proper speaker to go for in that situation would be the Avantone Mixcube, but its cheaper alternative is the Behringer C50A. One could be found for less than $150. I do not recommend the smaller version (C5A). This type of speaker could later serve as a mono reference speaker once you decide to upgrade. I highly recommend this methodology, if you’re not willing to go for studio monitors just yet.

Gah, just got back. Was actually about to ask about picking up a single monitor at least for now. While I eventually wish to go stereo, it’d be rather nice if I could do a single, then upgrade out later.

Been socking money away for this, did have a question that pertains to before. Given that the output is mono, is it acceptable to look at purchasing a single monitor to begin with [Similar to the Avantone/Behringer C50A] option, adding a second of the same model at a later time? Is there any trouble I could run into doing this?

They’ve just discontinued HS80Ms, I found one for $150 Canadian new, it is badass, check your local music shop & see if they have any ex-display etc. I ended up getting another full price (twice as much) but still worked out at 300 quid (what my brain really works in) for an awesome pair of monitors…