So, following this discussion , I decided I wanted to stalk the market and see if I could find an affordable Alpha Juno or MKS-50.
As I am on really tight budget, I was mainly looking for not cosmetically perfect units. Last week I ended up jumping on an occasion of buying an Alpha Juno 2 which does not boot anymore.
The owner said he was playing and it just stopped. According to him, it is the power supply that needs to be investigated.
As I am weak and always ready to go for a repair challenge, I bought it.

I have hopes that the problem is easily fixable and that I would not have to replace that many parts.
I foud the service notes manual, that will be useful I guess.

Has anybody fixed a Juno 2 that would not start anymore? Any advice, cautions?

I do not have the unit yet, but as soon as I have it we will see if I am good enough for this challenge, otherwise, I will probably call on this community for kind advices.

Thanks @crc
I should be able to open it and check that on Saturday, I will keep you posted!

If the fuse has popped then it’s usually for a reason. Ie. PSU fault.

It makes sense, Hope it is not the whole PSU that need to be changed and only few components…

Typically if something goes in the PSU it’s the electrolytic caps. Check for any that have bulged ends or are even ruptured. If some have and they’re all the same brand you may want to replace the lot of them.

Some filter capacitors go as well. I replaced the ones in an old BBC Micro last year, the casing starts to crack, so you should look for any similar components?

“does not boot anymore” – is it like completely dead, or LCD back light and some LEDs are on, but it does not show logo/respond to button presses?

If it does not respond, but LEDs/backlight are on, you may try resetting it to factory state… dying battery may corrupt non volatile memory which may prevent it from booting.

If it does not power up, you’ll have to open it, disconnect power supply board connectors, and check if all the voltages it provides are within specs.

Here is the service manual for the Juno-1; you can find the voltages listed in the PSU section.

Hey guys thanks a lot for your answers.

So I received the Juno 2 today.
Surprise, the post fucked it up, some parts of the plastic cover went off when I unpacked, and the base was bent… Nothing vital, but still annoying. It’s the last time I buy a second hand synth and ship it.

And here is something else, the guy who sent it forgot the power cable…duh! You know, this Roland ungrounded cable… So right now I can’t power it on, but I have some power plugs (like this one) and I am thinking of changing it.
Is it a problem because the roland plug is ungrounded? Of what should I be carefull of doing so?

But anyway, I decided to open it (Seems like I am not the first one to do so on this unit, some screws were missing).

First thing, the cables coming from the PSU to the power board were not connected… Maybe that’s the only problem?
I did not notice any bulged caps although there are traces of glue or corrosion on the bottom of the 3 big caps. 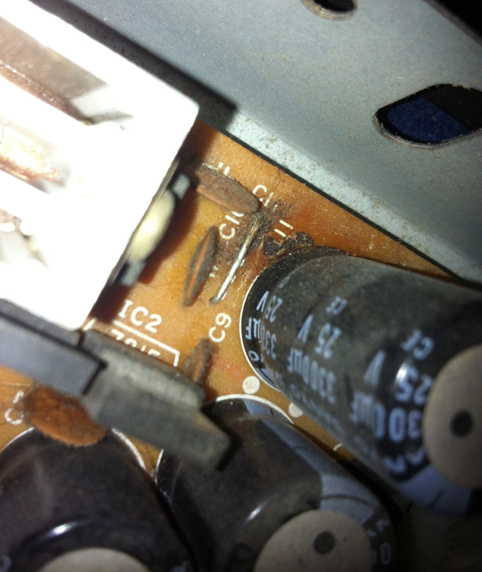 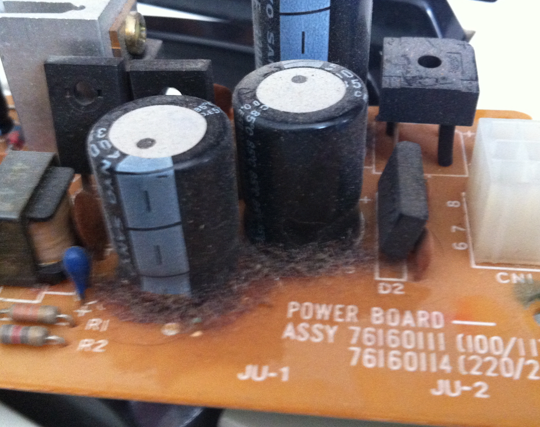 It seems that it could be glue (http://jimatwood.wordpress.com/tag/roland-juno-2-wont-power-on/), but could it be that the caps leaked? They do not seems bulged though…

Also, I noticed some soldering points that seems oddly close to each other on the back of the power board. There is also solering points that have this brownish color around, is it the result of overheating or just normal?

That’s it for the moment, thanks a lot again for your help, maybe MI’s forum is not the best place where to ask for all this but it the only forum I am kind of active in and where I find such an amazing environment.

DO NOT POWER IT UP
The Caps are leaking Electrolyte, you’ll have to remove them, clean the board and refit the Caps before you do anything else.

@fcd72
Understood! So I guess it is not glue then…
Could these leaking caps have damaged something else when the other guy powered it on?
Seems weird though because he told me he played it like a month ago and it just stopped working, but the stains looked so dusty that it seems that it has been leaking since 10 years…
Could it be that he lied…

Yup! At least change the caps before you power it up on the bench!
Also, changing the PITA that is the weird Roland PSU connector to a sane 3-pin socket is a must if you’re interested in your future sanity and having a good chance of finding power cables that fit.

Chances are that a regulator or some vital power transistor has gone rogue too, but that’s step 4 if step 3 isn’t OK.

Either the dude didn’t know, got the unit and offloaded it on you, or he’s a real Newark (rearranging the letters is an exercise for the reader) who flat out lied.

Thanks @Jojjelito,
So I’ll desolder the caps and resolder new ones.
Btw, are these easy to find, still in production?
So first step, I’ll desolder and clean the board!
Let’s go!

@Paulus I’d recommend contacting the seller and asking for a discount because of the damage. This obviously depends on what you agreed upon with him regarding shipping, but normally packaging properly and any damage in transit is mostly the responsibility of the seller.

@Paulus What kind of power plug do you need (i.e. where are you from)? I might have a spare Roland power cable to sell you cheaply if you’re interested.

@t2k
Yeah I know, I am trying to contact the seller, no answer yet… I already had a problem like that with a guy selling me his roland octapadIi and I ended up changing all the piezo (he said it was working well when he tried it…like 7 years ago…) but I ended up getting nothing, he even said I fucked it up myself…
So I have small hopes for a discount, it is not through ebay, it is basically absed on trust… I’ll try to tell him though…

I am thinking of replacing the power plug, but I am based in France. First i am going to make him send me this cable (for free!) and see if I can get a discount.

@Paulus: you need to measure the distance between the pins of the cap so that the new cap has the same pin spacing (German: Rastermass, or RM, French: pas entre broches).

Also, the caps need to be the same uF, obviously. Then they shouldn’t be bigger in physical size than the old caps, but that’s a small risk these days. Go for higher or the same voltage, plus as high temp as possible, I like automotive-grade long-life caps rated at 105C if they fit.

So I desoldered the 3 caps, weird thing is, I do not se from where it could have leaked… This brown thing is only on the outside bottom bas of the caps, on the cover of the caps… 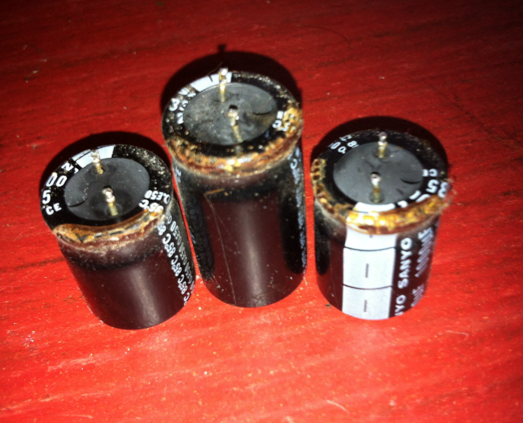 Should I clean them or are they definitely fucked?

Yups, get a Cap with a higher Temperature rating and low ESR Type. This will prolong the life of the Cap from about 1500hrs to way above 5000hrs