yeah. somewhere in the chain something isn’t sending or receiving external clock. That’s the only thing I can think of.

alright, i have never thought to change the d-50 to external clock so i will give that a go now. thanks for your suggestion hopefully the solution is that simple!

Every problem I have with a midi or audio chain is usually me messing up something so simple…and it takes me hours of frustration before I realize I have my audio outputs in incorrectly or I didn’t have something receiving clock. We’ve all been there man!

Read this thread. Apparently the D-50 doesn’t send clock (or, there isn’t a simple answer to the question). I did some digging and one person claims that’s not true.

Of interest: " but the Roland D50 (mentioned in an earlier post) has a notoriously
slow software-driven MIDI THRU.

The D-50, being of an earlier generation, has a hardware through port
and not software. It’s just a couple of invertors tacked onto the output
of the opto. I never had a problem using the through port on the D-50 to
drive my midi chain back in the day.

The D-50 does, however, send the dreaded all notes off (CC123) on its
output port whenever you take your hands off the keyboard, which makes
it less useful as a master keyboard."

Even so, sell the D-50 and buy a cheap controller and a cool module (like an Ambika, for instance =).

alright, thanks for your info! i will go and try the thru port, my only confusion with it would be that wouldnt the d-50 be sending midi to midipal then to mpc then back to d-50 and it would create a loop wouldnt it? if so i might just have to buck up and spend a couple days pay on a dedicated controller. someone nearby is selling an axiom 61 for 300, kind of expensive second hand but maybe its mint with box.
and im starting to get more into modules, i figure theyre the route if you want multiple synths. 2 of my synths are modules in my current setup, a korg m3r and a yamaha fb-01.
I had a Shruthi-1 that i was building but i kept running into strange problems and feel i damaged something so its put away for now. and i still have an untouched Anushri kit in my drawer waiting for the day i feel confident enough to take that on.

My advice: get an Arturia controller. The software makes it so easy to program patches for every module you own.

I’m returning my Impulse 49 for the Arturia one because Novation doesn’t give a shit about hardware control. DOWN WITH AUTOMAP!

do i have to use a computer in my setup for the arturia? or are you referring to the build in software interface on the keyboard? id rather stay away from something i need a computer for since thats another pit of money gone down that road hahahah. thats why i took the MPC route in the first place instead of FL for example
EDIT: and ive definitely had issues with the evil cc123 from the d-50, every time i record a sequence i have to go into my mpc and “erase all midi note cc123”. having a dedicated controller would definitely help that

No it’s a controller that just happens to come with some nice VSTs as a bonus- and software to edit your midi control patches and send the snapshot to the keyboard (and save it and name it). I do it with my little 25 key analog player and the Anushri. Works amazing and so simple to program.

This is what I’m getting. 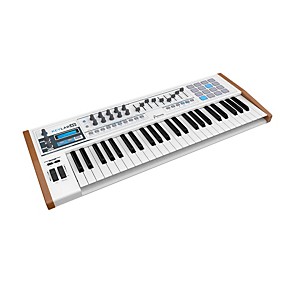 hmm that’s really neat looking, i’ll have to look into it more, the axiom 61 is still a definite contender though for now. but there is someone also selling a Korg polysix they mentioned in their Fender Rhodes mark 1 ad. which is going for $1000 i dont think thats unreasonable. how much would a polysix go for in these days? and does it have any kind of midi control or is it too old, those older analog synths without MIDI implementation really scare me even though they’re so fun.

That’s a good price. I’d pounce on that. It isn’t going DOWN in value on ya, so you could always get your money back when you need it.

thats neat, albeit doesnt show polysix there but is probably still do-able. looks like im going to have to buy a midi controller after all. i switched midipal input to thru from the d-50 and it didnt receive any messages at all. presumably because nothing was being sent into the d-50 to send forward and the thru doesnt send the d-50s midi out info.

Are your MIDI cables old? They need to be replaced every 2-3 years.

I was unaware of that. I mostly use ones ive made myself though.

RyanA4, I have MIDI cables I have been using for at least 10 years. Why would those cables need to be replaced? I had never heard of the dreaded all notes off thing but my A90 does send something constantly, not really sure what it is. This happens even when I am not touching it.Gnome, hook your MIDIPal up to the out or through port on the D50 and configure the MIDIPal as a MIDI monitor. You may be getting the same constant messages and that may be screwing up your stream. There is no way to turn it off. I love my A90 but Roland had either some very stupid people working for them at some point or they were too smart for me to figure out why they did what they did.

Sometimes, MIDI cables fail. Not every one, but you should test them every half decade or so. Usually the cheap ones with the flimsy metal plugs are prone to failure.

and I ONLY buy the cheap ones haha

Build your own cables…it’s way cheaper and more reliable. I usually use the fine Neutrik plugs and soft shielded 5 wire microphone cables. Works like a charm and they never failed me.

I’m a little OCD about my MIDI cables because I’ve had a few fail on me and make me think my gear was not functioning and so I constantly test them. But it is well known that cheap MIDI cables deteriorate relatively quickly and can cause some drift and mess up chains.