Bells - anyone researched them?

I live close to a church that sounds a bit like someone hitting plates with a mallet. There doesn’t seem to be a melody, just a pretty irritating pattern that goes on for a minute or so. Maybe this is the point - but the bell ringing eventually fills the entire neighborhood with an underlying resonant feedback which is quite incredible - especially in particular weather. I assume thats the whole point of this bell design? or just a nice sideeffect?
I noticed it before and it creates an interesting composition where you can choose what to focus on - the annoying kitchen plates or the vast resonance. But on the day it was 31c with rain incoming in an hour or so - there seemed to be almost blasts of waves that would periodically happen during the resonance - it was really interesting and that was new.

I’ve noticed that subtly modulating the Position parameter with an LFO in Rings’ green mode, with a somewhat dissonant Structure and playing low notes, quickly gets you into church bells territory. That makes me think a good part of what makes church bells so recognizable is the way they swing inside the bell tower, so that you alternately hear the sound projected directly at you and the sound radiating from the side, creating a kind of PWM effect. Or maybe it’s the way the sound is affected by the surroundings?

In any case, the way they resonate through the neighborhood is fascinating. Not to mention that they’re massive, town-wide PA systems from medieval times!

ah of course - the swinging - for some reason i thought the one here was stationary and only the hammer was swinging.

I’ve always been intrigued by the way air and walls affect sound and been having thoughts that the “strange” sounding tunings of claviers (like split sharps era) or whatever were really meant to create interesting resonance in the space they were put in. And as instruments became more and more democratized the whole world of instrument tunings has been homogenized.

Lately, at least personally, it seems to make more sense since I’ve always heard the bell and not focused on the resonance of the ugly bell. Maybe all the youtube videos and concert recordings of what sounded completely out of tune horror from yester year is just not correctly portrayed in the recordings of what the tunings were meant to do.

ah of course - the swinging - for some reason i thought the one here was stationary and only the hammer was swinging.

That’s definitely the case with carillon bells, but you may be right, maybe some church bells don’t swing either. I don’t know if the swinging contributes to the sound, it’s just a theory.

Two years ago I was up in the St. Mary Basilica in Gdańsk while the bells were ringing. Quite a physical experience. 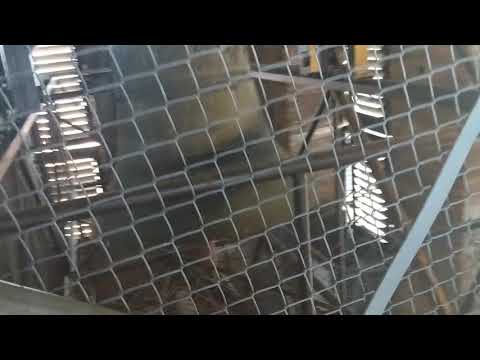 Edit – I just noticed that the audio recording I posted above (made with Rings, as part of the synth track of a song from my doom metal band) starts on the same C sharp as the bell in that Polish basilica. Not sure what to make of that.

That’s definitely the case with carillon bells, but you may be right, maybe some church bells don’t swing either.

By the way, while looking into this I came upon the utterly fascinating practice of change ringing. 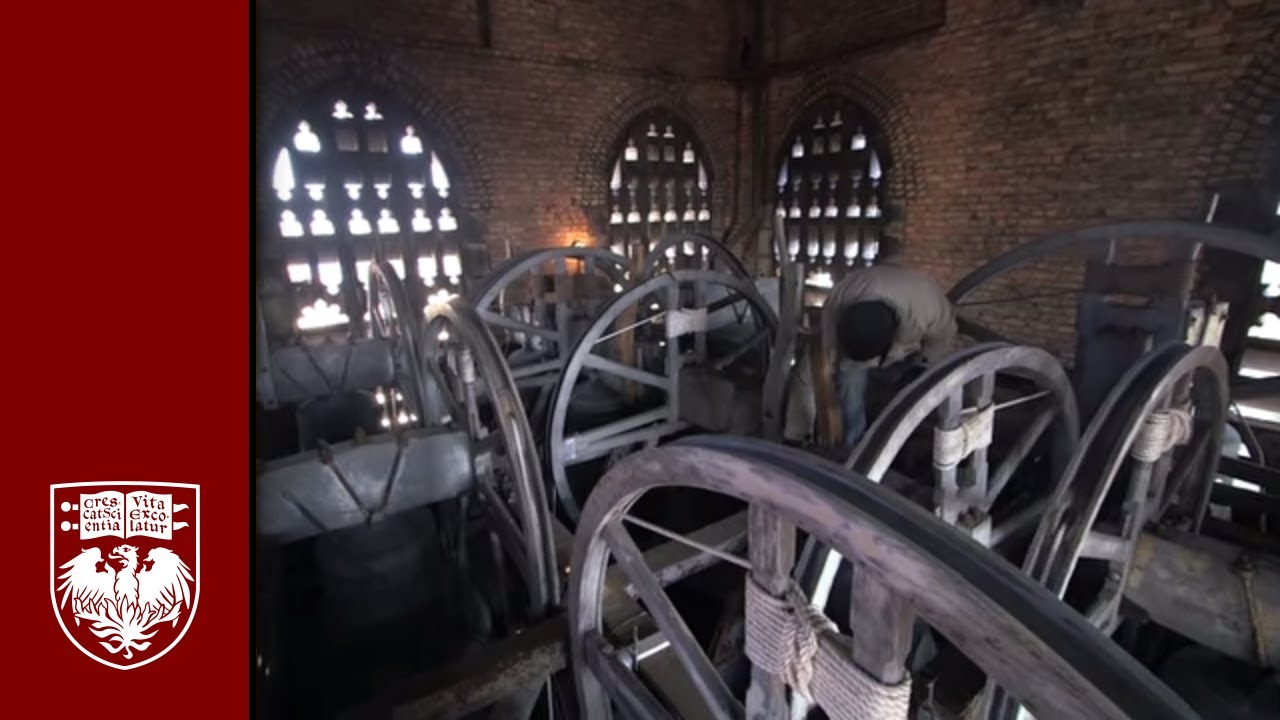 So now I want to know more about those mathematical patterns and how they could be used in modular music.

On its surface, change ringing is simple. Start with a pattern of notes, then iterate through it with a set of rules. Switch the order of a couple of the bells after each time loop, and keep it up until you return to the original or your arms are tired.

As for realizing it in modular, I imagine you could do it well with analogue shift registers or sample&hold storing the note for each ringer and logic gates facilitating the changes.

I personally do not have a modular system (i came here for the engineering advice and stayed for the design insights) so I’m not sure if anyone would actually have 6 or 8 shift registers or sample and hold modules handy. But it’s a concept, somewhere to build from.

That’s pretty close to what change ringing is, except the changes are deterministic rather than random.

If you are into firmware editing, you might also be able to get Marbles to make the ringing changes. I can’t imagine a good interface for it though.

Immediately thought about this

In terms of interface, I don’t see much beyond selecting a ruleset with a screen/encoder.

In terms of IO the most flexible thing would be a switch matrix that permutates 6 (or 8) inputs to 6 (or 8) outputs, maybe with one input normalized to the clock signal so that at each tick, the clock signal is output on a different output.

But that would be a very niche module

I’ve read a bit more about the subject now (the Wikipedia article is quite interesting), looked at a couple of diagrams etc, so I’m starting to get the gist of what the rules entail. It’s fascinating how simple they are, and relatively easy to remember and perform, especially in handbell ringing, where the participants can physically switch places for every change. Yet I still can’t really wrap my head around how they could be implemented using basic modular building blocks. It should definitely be more straightforward in software/custom firmware, or with a dedicated module, than by pure patching.

And yes, I was also thinking about Marbles with DEJA VU past noon, with its permutations of the same material. Although it would seem cruel to shackle a module that is so deeply about randomness to deterministic rules.

And it wouldn’t be elegant, such a rich interface just for selecting rulesets – most knobs would remain unused.

Maybe I’ll try something in Max4Live.

I made a VCV patch that does the 6 bell “plain hunt” method of changes after posting my bit. It took a couple of hours, and uses 24 VCAs (all for muting/passing an analog signal), 6 s&h modules, and a bunch of small mixers. these pass the V/oct signals to 6 voices which are triggered in sequence and mixed together.
All things considered it was a fun experiment but these patterns probably aren’t worth the effort in hardware when you have so many other options.

I’m still going to expand my patch to allow for bob methods, because I’m already this close.
Lots of good methods and info here: https://cccbr.github.io/method_ringing_framework/index.html so I’ll try to realize those in my patch eventually.

Wow. That’s impressive! Yes, 24 VCA’s is a bit much for hardware, but as a proof of concept your approach still seems very compact.

I’m not sure if anyone would actually have 6 or 8 shift registers or sample and hold modules handy.

MI Stages is six S&Hs in one module.

Tom Johnson has an entire book on the math of self-similar melodies. I don’t think he touches on change-ringing or braiding, but he does touch on weaving and many other similar algorithms. I’ve patch-programmed a number of these in modular just as an intellectual challenge.

I’m not sure if anyone would actually have 6 or 8 shift registers or sample and hold modules handy. But it’s a concept, somewhere to build from.

) so I’m not sure if anyone would actually have 6 or 8 shift registers or sample and hold modules handy.

Well this just arrived for me last week, so it gets me part-way towards exploring these ideas:

Pretty much any object has certain particular resonant frequencies they’re sensitive to. Enclosed or partially enclosed areas do as well. I suspect the Alphorn was used to explore resonances in alpine valleys. A friend of mine once used a homemade PVC “alphorn” in the storm drains of Santa Monica to explore the resonant frequencies of the drain system. Think of a resonance like pushing someone on a swing. To get the swing rider to go as high as possible, the pusher needs to contribute to the existing momentum at a particular rate, essentially, the resonant frequency. Some frequencies will add to the existing tendency to resonate, while others may do very little because they aren’t in sync with the natural resonance (the natural “swing” if you will). An electronic oscillator can be used to explore resonances in objects through a transducer (a small speaker will do) by attaching it to an object and then looking for frequencies the object particularly responds to. Nicola Tesla did some experiments of this kind and concluded that the right frequency could raze a building to the ground in some cases by hitting it at the right point with the right frequency, causing a build up of vibrations that could tear it apart.

Maybe this is the point - but the bell ringing eventually fills the entire neighborhood with an underlying resonant feedback which is quite incredible - especially in particular weather. I assume thats the whole point of this bell design? or just a nice sideeffect?

To my knowledge the main difference between bells and any other natural sound generator is: bells are based on undertones/subharmonics instead of overtones/harmonics. Usually the undertone two octaves below the base frequency is what you hear as “underlying resonant feedback”.
I have a Doepfer A-113 subharmonic generator, wich outputs saw waves. Those are not ideal for bell sounds. But experimenting with it, you get an idea.

Immediately thought about this

In terms of interface, I don’t see much beyond selecting a ruleset with a screen/encoder.

In terms of IO the most flexible thing would be a switch matrix that permutates 6 (or 8) inputs to 6 (or 8) outputs, maybe with one input normalized to the clock signal so that at each tick, the clock signal is output on a different output.

But that would be a very niche module

The Temps Utile module by mxmxmx (aka Max Stadler) would be a good platform for this. It’s the trigger/gate companion to Ornament& Crime, but unlike O&C, there’s plenty of room for additions “apps”, and a ringing-the-changes app would be very feasible. Bells are polyphonic, so using gates to trigger six separate audio sources which run independently of each other makes sense. Hmmm, a dedicated bell mode for Peaks (two bells per module) would be nice, and possibly feasible if there is sufficient CPU available.

I have a friend who is learning bell ringing (or was until COVID-19 silenced the bells, for now). He has written an app for Apple iWatches which uses the accelerometer and microphone and buzzer in the watch as a training aid – it listens to the peals, senses the rope puts, and prompts the wearer when they need to pull the rope, and how hard, given a defined set of changes.

Given this discussion, and the fact that the winter/summer solstice has just passed, I feel obliged to include this: