Sourced parts via a mouser cart from the fourm, and while I did double check it against the BOM, noticing the 4.7uf NP electrolytic caps (c1, c27) I ended up with are 25v, while the BOM says >35V (I must have missed this when I was checking. /facepalm)

Wondering if this will be an issue?

yup, those are what I got!

The voltage rating for the cap should be above the maximum it sees ‘in action’, which for the Ambika is easily less than 25v, so yours are perfectly fine.

Yea when you put it that way it seems obvious. Was maybe thrown be the explicitness of the BOM in saying >35v.

So yea, will turn this into my general “I’m building an ambika!” post a la “Eurynom3”

Got a VFD, very excited to get that in there, reminds me of my old esq-1 which I sold long ago.

Almost went the xpander style marquardt tact switch route, but decided against as I would have to do something to sort out the different footprint, and while I could get daughterboards made at osh park, don’t know if I’m patient enough.

Thinking of building the ambika into a keyboard (have an old roland keybed laying around), but still sorting out case design.

Lot’s of great inspiration, tips on here. A big shout out to all forum members, and Olivier!

So I was designing / planning some panels that I could rack up with other gear:

and unless I’ve inhaled too much soldering fumes it looks like the anushri and ambika pcb’s don’t actually fit side by side in a rack. BUMMER!

Haven’t done that math yet, but I’m assuming a shurthi does? Good excuse to build s shruthi, haha.

Well… You could mount the PCBs behind each other, but you would nee to break out all the ambika connections to the frontpanel, and if you don’t use shielded wire there’s a decent chance of transmitting hum to the Anushri…

Hmmm… yea thanks for the suggestion, thought of the whole panel mount option (gulp) but at that point If I was going to go through the trouble I’d probably rather make an ambika 2u rack affair as some others have.

Latest idea is to make sort of cabinets for the 19" stuff, and have the other two panels (lxr, anushri, ambika) as table top w/ angled end cheeks.

This also led me to have a blank space next to the lxr (big black rectangle in screenshot), which just happens to fit 36hp of eurorack. uh oh ; )

not sure how to do the powersupply,

You can rack 3 Shruthis Side by Side…. 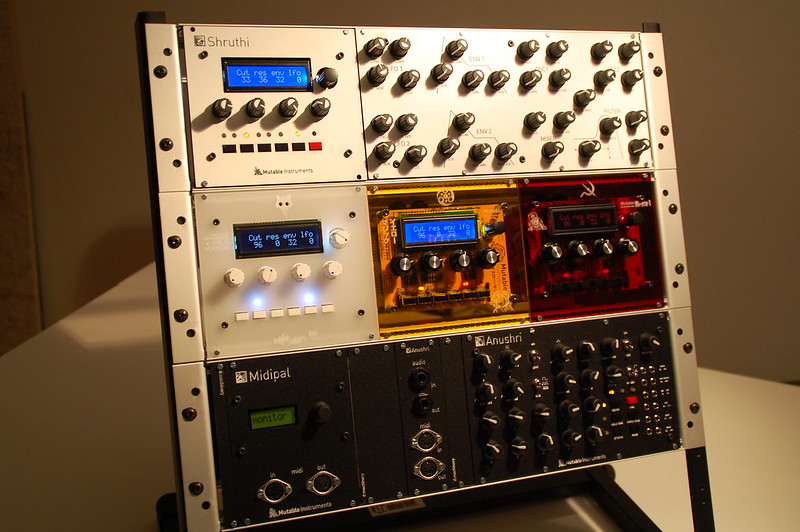 Is it me or could these actually be kind of cool with the right case material (i.e. not clear acrylic).

Might be worth ordering some to see how the feel / perform. Although I guess I should check the datahseet for more details. At least it seems with the longs legs one could bend them to fit the footprint.

Would be nice with Adrian’s metal case, perhaps …

Where did you find these switches ?

Looks a lot like the switches used on this thing. Nice!

Yea I had something existing in my head that I felt it would look like. Forgot about the nemo, isn’t it like th emost expensive sequencer in the world? ; )

I’m probably gonna go ano’d black aluminum for my panels, so that I can laser etch for the graphics (friend’s with lasercams, gotta love 'em) so I’d imagine it would actually look very much like the nemo.

Thanks !
About a Euro each is OK

Nice switches. But i think you’ll have a hard time fitting those on an Ambika. I case you really do want to i’d solder them to a bit of perfboard and connect that to the switch terminals on the Mobo.

Yea perfoard daughterboards might make most sense. good call. I was trying to avoid that, but at this point my vfd is still on its way so less impatient, now. ; )