what are the chances of you even considering an expander module for beads? 10%? .0001%? .0e+991%? recently deceased talk radio hosts coming back to life and atoning for crimes against humanity low?

i was reading your breads illustrated story, and seeing the seed trig out sacrifice got me thinking about what else you’d have included if panel space were larger. could be cool to have the widest apart grains on separate outs for a quadrature application, and perhaps some influence over the internal randomization (rather than implementing separate scale firmwares for pitch.) just figured i’d poke the genie for a 4th wish.

what are the chances

Zero. I no longer develop modules, expanders do not bring any profit because of the way I handle manufacturing, and your suggestions are not technically feasible (for example, getting quad outputs is not just a matter of adding more jacks – you need a codec with 2 additional output channels, not to mention rewriting all the code to take care of that).

Well, it’s true that now that the real time processing is really a thing - which was not with Clouds in my opinion - it’s maybe not a good idea, but yes, it is what it means. But for a more usable option, I would love to see a dry wet with a duplicated signal : fully dry it’s fully dry, and when you add some wet it acts as a parallel send VCA on a copy of the signal. But actually for Beads it looks more intelligent to do this on the reverb.

For a reverb or a delay, the difference is that the FX tails are not cut by lowering the send. I’m not sure though that would be relevant for the wet/dry control int not ∞ mode. Seed and Density already plays the role of a send control.

Yes.
Doing this on the reverb parameter would allow to create some interesting stuff. As I said it upper, the crossfade thing seems good for granular real time processing (never used such a thing so I’ll see when I have mine), but is never a good thing for reverb, because if you are in a case where you have a lot of reverb, and want to calm things down, or want to get your sound closer, it will be impossible for you to have a natural feeling, meaning it will be impossible to hear the reverb die softly, hearing its tails. You will be obliged to crossfade from the big reverb to your dry signal.

That being said, I remember that my Clouds reverb parameter was more intelligent than just a crossfade, meaning turning the pot would increase dry/wet, but also reverb time, size…
But it’s still a crossfading thing that doesn’t allows for certain things, such as sending some gates to your reverb cv input, so you can have some short parts of the Beads processed sounds that go into the reverb, hearing these reverb tails while hearing the dry Beads sound doing its life in parallel. This allows for deeper and more complex spaces, because you can lead several dimensions of sounds to cohabitate.

I understand that the eurorack public, and maybe even more the people that love the kind of good-vibes-easy-ambient-rings-into-clouds stuff, tend to like the easyness of a drywet reverb, which give the possibility to make some big, lush, fully reverbered sounds in a few seconds, rubbing out all the asperities of the dry sound. So maybe I’m missing the whole point of the module here, but i tend to think that the send thing on the reverb would give more sound design options, because you could gradually add depth to you sound, making it more complex, instead of crossfading between hugely different sounds.

I guess the only default of this is that it wouldn’t be possible anymore to have the fully wet sound, but I’m pretty sure you can map such a thing at the end of the pot (or at the top of the CV input range).

For the main granular effect, what this would mean, practically, would be that silence would be fed to the granular buffer when the knob is set fully CCW (instead of continuing feeding the original signal). I’m not sure this is a good thing, because then if you go back to the wet setting, you end up with an empty buffer.

The reverb knob is not dry/wet balance, but a curated combination of dry/wet and absorption/decay parameters. When the know is brought CCW, the decay gets so short that you couldn’t hear a tail, no matter which mixing scheme is used.

I have a cute dry/send/wet reverb meta-parameter thing that still makes a tiny tail ring for a while when the knob is turned CCW. Maybe it’ll stay in the firmware update I’ll post in a few days

What if the dry side of the wet/dry knob attenuated the amplitude with which the buffer is read by the grain generators? So that at fully dry, the buffer is still being written as usual, but it is read at zero volume. That way, when turning from dry to wet, the buffer is already populated; its read amplitude (and thus the volume of grains generated from it) just gets gradually higher.

It would mean having that spillover grain tail when moving from wet to fully dry, without the disadvantage of starting with an empty buffer when moving in the other direction.

On the other hand, it would be a short tail, as I suppose the buffer being read at zero volume would prevent feedback from propagating.

(This is more of a theoretical musing, not a suggestion that it would be better that way – my Beads hasn’t even arrived yet.

I love the audio level auto setup, what do you think about adding a transient detector to auto trig seeds ? It’s funny with a drum loop, i already do that with Ears, but it could be nice to have that from the beginning. Could be difficult to setup threshold tho.

I love the audio level auto setup, what do you think about adding a transient detector to auto trig seeds ? It’s funny with a drum loop, i already do that with Ears, but it could be nice to have that from the beginning. Could be difficult to setup threshold tho.

Probably no CPU left for it, will require a hidden button combo to activate it, and as you anticipated it will be finicky without any accessible threshold setting!

Feels very much like arbhar in a marbles costume somehow.

One queation which i did not find in the manual, sorry:
Is there a way to limit the recording time in a frozen buffer?

Is there a way to limit the recording time in a frozen buffer?

I’m not sure I understand. You want to have, for example, only 1 second of audio available across the entire range of the TIME knob?

Or for example six or whichever seconds in a lower quality, so as not to have the old material that is in there popping up.

I probably should read the manual better before asking, its a really deep and genius module.

Ah I see… No it’s not possible, the concept of a fixed-size rolling “tape” is built right in the foundations of the module.

It’d be nice if holding freeze sets the start and end of the sample.

Is that how Morphegene works?

It’d be nice if pressing freeze sets the start and pressing it again sets the end and while it’s in freeze mode you could fiddle away to the set loop.

Then you couldn’t gather different chunks, for example unFREEZE and record a sound, FREEZE, change the parameters of your oscillator, unFREEZE, record another note, FREEZE… and so on, to fill the buffer with variations of the same sound, or different notes.

To return to the idea of having pitch quantization, rather than handle scale selection in the module, would it be possible to do something like for FX AID where you can use a web UI to pick which scales you want to load to your unit and then generate firmware?

To return to the idea of having pitch quantization, rather than handle scale selection in the module, would it be possible to do something like for FX AID where you can use a web UI to pick which scales you want to load to your unit and then generate firmware?

Technically feasible, but no. You’d still need a button combo to enable/disable the scale, and select one (I’m sure that people will want the option to switch between different presets during a performance).

I want to keep this module WYSIWYG. There are good quantizer modules.

Another thing to keep in mind: for this kind of effect, you’d also need to break the attenurandomizer and CV into pre- (how far from the root are you reaching) and post-quantization modulations (how further detuned the notes can be once they are quantized). This is more obvious to do with proper patching than with a built-in quantizer and reassigning CVs to different functions.

Thanks for the response.
Makes sense.

Hi Emilie, I don’t know if it is even remotely possible, but would there be a way to have the Seed input jack output a gate each time a seed is auto-generated? I know that that would not work with the auto-detection for the jack, but that would be a neat feature.
I did a small demo video last night on Beads 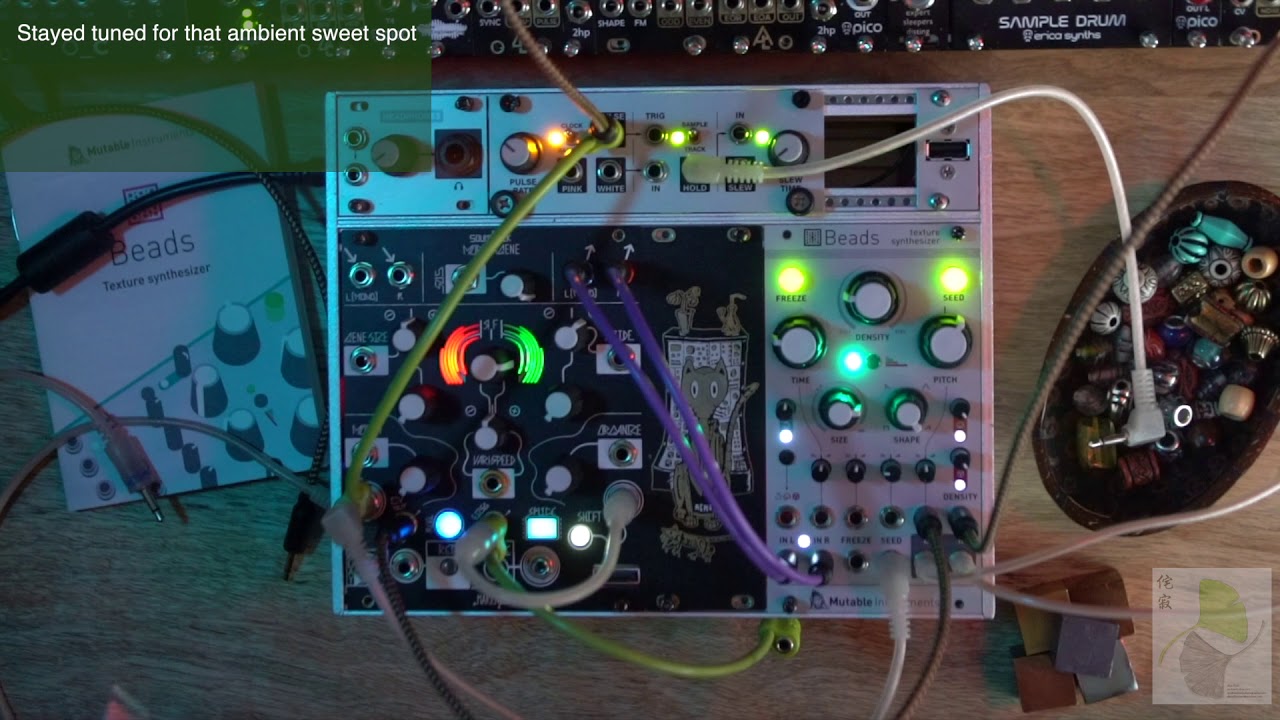 Hi Emilie, I don’t know if it is even remotely possible, but would there be a way to have the Seed input jack output a gate each time a seed is auto-generated?

An output circuit is not an input circuit with everything flowing in the other direction. You just can’t turn an input into an output.

It is however possible to repurpose the R output to do exactly what you need to do! Check the “Mixing and Audio output” section of the manual!

Is there by any chance any possibility for the option of leaving it on when thing(s) are plugged in for those of us who don’t have a Plaits?

Also a small request: I find the entering and leaving Delay mode a little inconsistent on where exactly the pot is. It’ll turn on at one point and turn off at a different point. It would also be great if it could only turn on/off at the very end of the turn so that I know exactly where it’ll turn on and off. At this point, near the end of the turn, I may or may not be going into Delay mode soon.