ORIGINAL QUESTION:
I was wondering if anyone knew the best way to wire up the SMR-4 MKII Filter and Digital Filter on Frank’s Wasp XT Programmer. I’ve looked at Frank’s wiring for the Polivoks + SMR-4 here: 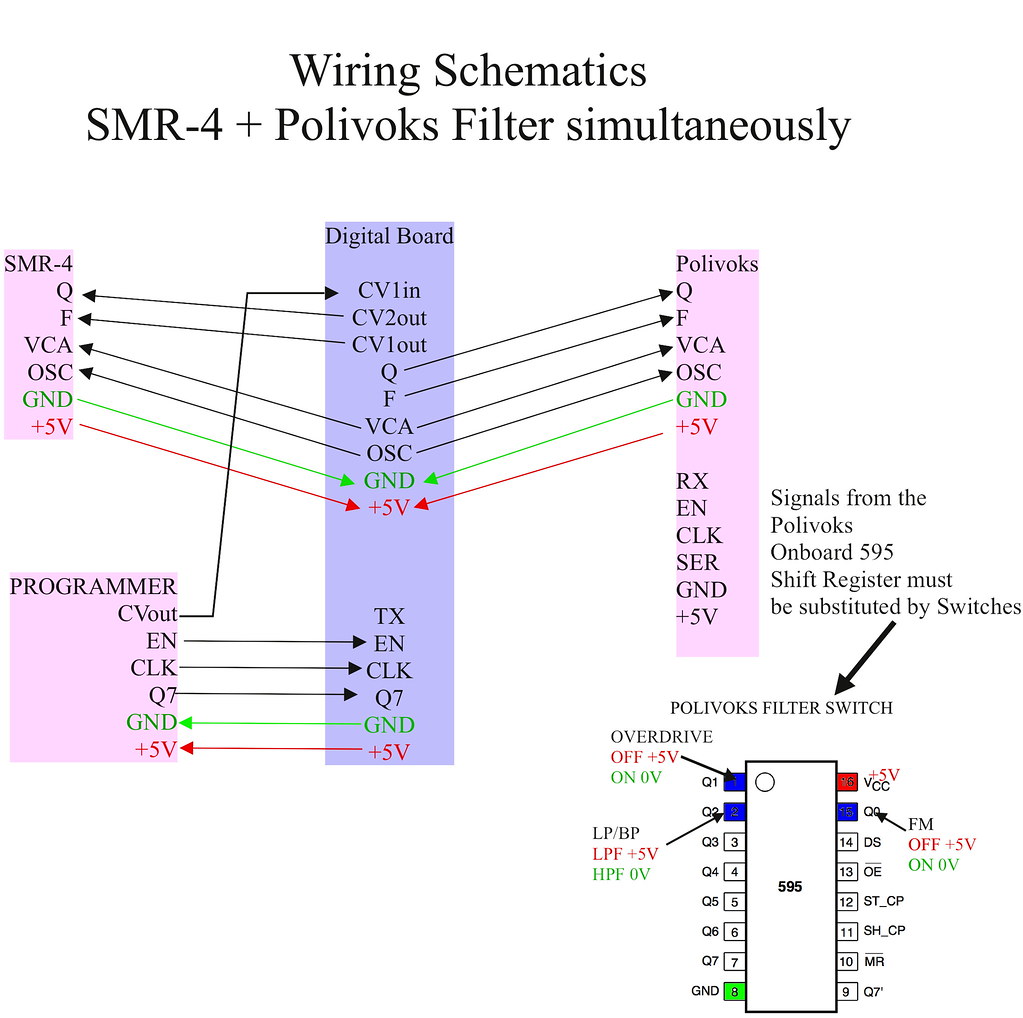 but, I’m unsure of wiring it this way. Any help is much appreciated.

This one is easy: Just pull that TX Line from the Digital Board to the Digital Filters TX in and thats its.

Banana Chart attached… dunno if this is right though lol

Bandana-chart? to wrap around your head?

Yup! Makes you look like a brain dead stadium rocker from the 90’s

With optional face paint and spandex?

I’m guessing GND and +5V don’t need to be sent from the digital control board to the digital filter board. I have attached a new diagram. Anyone know for sure if this is correct? Do both filter boards need to be wired up to the DC Jack (daisy-chained)?

Power the filter boards via their DC jacks as normal. Use one PSU that is beefy enough to drive them all. You want a common ground between all boards to stop any hum cause by ground difference.

@6581punk GNDs need to be interconnected between boards, as well as DC Jack connections? or is daisy-chaining the grounds to the DC jacks on the filter boards effectively the same thing? or do both?

@fcd72 not trying to rip off your bananas.

I will remove the BananaChart™ if you want.

S**t, no way! - you just need to add some candy colors for the Labels to make it more BananaChartLike™

I still hope for a bandana chart. Plus some old stoned rocker dude “singing” Take me down to Paradise City where the girls are green and the grass is pretty. Gotta get my 90’s nostalgia on.

lets see if i find some time to compile the MonkeysGuideToBananacharts™ an a BananaChartConstruxionKit™ / lets make the world yello!

I’ll never eat soup while reading one of these threads again. I nearly spat it all over my laptop. You folks are too much!

Awesome Bandana Chart! Gotta go fetch my Sennheiser cans so that some well-thought out Spotify playlist can carry me over until lunch. Since it’s humpday we’re rolling downhill into the weekend from there™

@xtrmnt
MAybe we can merge both together exchanging Micrphone and Guitar with Bananas to get Ban(d)anaCharts™ ??