Anybody have any ideas for a Eurorack VCA?

@sammy123, certainly cool, lots of stuff too. Toss a few LEDs behind those acylic panels and you get more flashing lights.

@piscione it’s linear. http://www.bartonmusicalcircuits.com/vcamix/ Its based on Thomas Henry’s VCA-1

I have a euro panel design for it.

I think I like the Thomas Henry version more. @altitude, do you have a photo of your panel design? I’m wondering if I can squeeze it a bit.

Its the one on the right side, 12HP IIRC. Your not going to squeeze much more than that, it uses 16mm board mounted pots 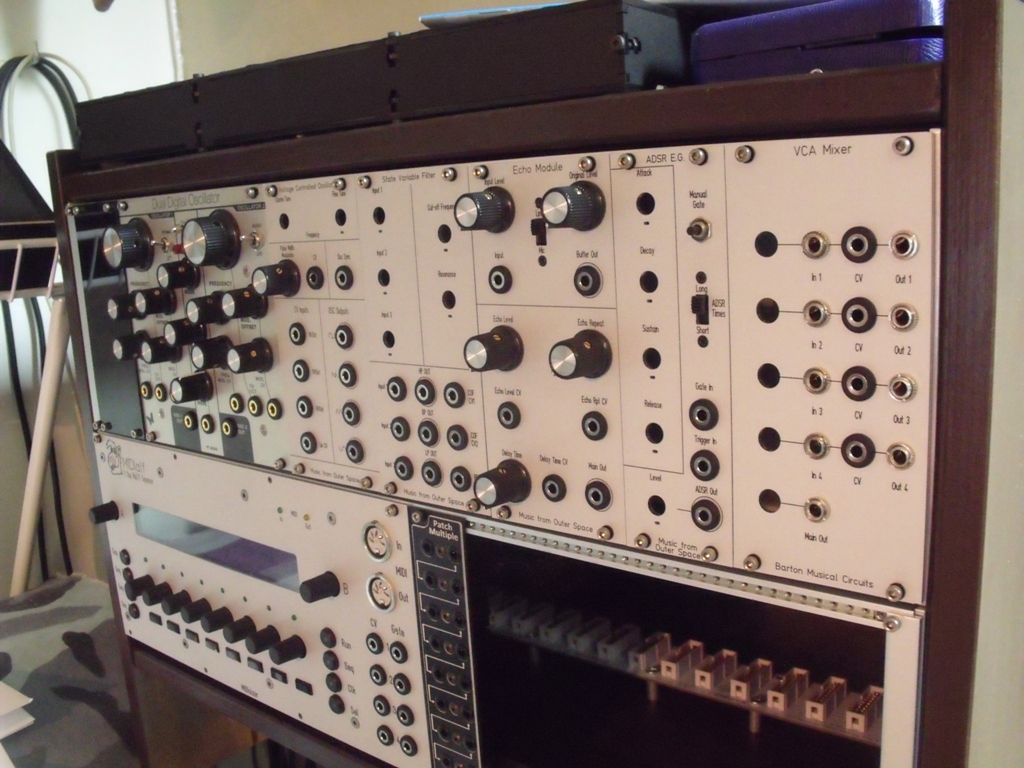 I also have the Barton VCA …
I made a frontpanel in 11HP … I think i have a spare frontpanel left in somebody is interested.
I like it it but it’s my only VCA so i can’t really compare.

“The most obvious difference between this and the VCA-1 is the lack of the input gain stage, without this inverting stage each of the VCAs individual outputs are inverted from the input (meaning negative voltages will be presented as positive voltages, etc.” Maybe I’ll take a closer look at the Thomas Henry version.

indeed, looks good. But isn’t it the same layout as the grayscale panel (only mirrored)? The black jacks look really good …

@shiftr that does look good!

cool, BMC stuff seems quite popular around here. i have everything from Michael except the stuff from the last few months (guess the VCA was the last one). it’s all in my backlog, comleted boards but waiting for a big 17" euro panel i wanted to make. but now with the new board mounted pots style he does i’m thinking about getting his empty panels and paint them somehow. actually quite inspiring, cool idea… but the big one would be great too

about the VCA, if the size really is what matters most (and not the VCA), there’s one very slim one from manhattan analog. of course i’m not saying this isn’t a good VCA, i’m thinking of getting it too, but for me size doesn’t matter as long as it’s a cool module.

I suppose I may want a bit too much. Not too big, linear (or lin/exp switch), DC coupled, no inverted output. The MA is a single in 4HP and ac coupled. I suppose two uVCAs is still the way to go. 4 VCAs, bells and whistles and 12HP. I haven’t been able to find anything mentioning whether or not it is DC coupled but since it is apparently good for audio and CV signals, I’m assuming it is. Another option is the ModDemix.

or fonik’s cascadable VCA’s they’re DC coupled - but not so slim. but they’re mixers, and cascadable behind the panel

There’s also the Befaco open-source Eurorack hexa-VCA design. They don’t seem to sell PCBs or panels but you could ask. The Eagle files are available so you could have a PCB fabbed by somewhere that can do the milling for the PCB-mount jacks - like Jackaltac. The Eagle file shows PCB mount banana connectors, but they may have the same footprint as the PCB-mount 3.5mm jacks that Befaco also sell (which are the same type used on MI Links, I think) - you would need to verify that. Befaco also sell the vertical pots and PCB-mount switches used in the design. Everything else looks to be readily available. Not sure how well it performs - nothing fancy in the circuit, but looks interesting.

@morcego … yes the design is inspired by the grayscale one… I managed to sneak of 1HP .
A 6U case makes you want to have small modules. I can’t believe how quick this thing is filling up. I think i’m going to let the anushri go to make some space for more modules. And later i want a separate case as a drum modular.

I wanted a small portable case… That’s easy to take with me sometimes. My next case might be a 9u. And I didn’t want this modular thing get out of hand… But it already has… There is also a braids in there now. And I think I’ve got at least another 6u of PCB’s in the backlog. Next modules will be the tripples and the bernouli gate

@shiftr
Do you know about Trident?

I’ve seen it on your blog… Looks a lot like a tripple looping envelope.