This is really one of the most incredible things I have ever found on the Internet… This guy Ron Soyland has dedicated himself to recreating the lost art of making vacuum tubes on a small scale, without the large factory furnaces, pumps, and stamping machines usually associated with tubes. I find it amazing to watch him work, experiment, engineer, fail, try again… and succeed! Anyway, if you’re into this at all here are a couple of links.

He just published a sort of online book about the process at tubecrafter.com. He also has a very interesting and informative Youtube page here.

The French guy is amazing indeed. Then I watched a BBC documentary about the Mullard Blackburn plant from the 1950s showing how the entire process was eventually automated. The machines invented to do this work were also a form of art. They weren’t robots, they were machines designed to assist humans, designed to work with their human hands. What a concept.

sigh This is beautiful!

I’ve seen the French chap’s work before (and been amazed by it) but this link is new to me. I’ve bookedmarked it under “Art”!

the result is similarly great indeed, but watching the process of making tubes beats programming, soldering and putting stuff on breadboard

amazing. just watched the guy for like 2 hours. awesome! even most the tools are diy.

yep, i’ve seen the french guy video some time ago, but I must admit that the Nixie Cat is pretty impressive!

this a french guy doing something similar… http://www.youtube.com/watch?v=EzyXMEpq4qw&feature=related 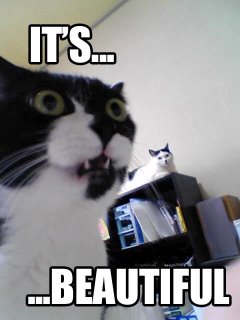 “Its life Jim, but not as we know it!” - Badass ÜberCool™

Whats next? Hone your own Transistors from a Piece of Silicon??

Thanks for the link TR