You most likely don’t need an electrical engineer to fix it, just some troubleshooting. I’m wondering if there is anyone near you who is a builder on here and could help you out. I had all sorts of hassles with my Anushri, and eventually sent it to one of “our guys” in the U.S. (I’m near Toronto, Canada). He found the issue right away, a problem with one of the IC legs not seating properly in the socket. Something so small cost me return shipping (approx $40.00) but fortunately he didn’t charge me any bench time!

Is there anyone near Adam who can help him out?

I’m in the Netherlands and willing to check it out. Also Tube Ohm does fixing sometimes.

Thank very much to everyone for your support and advice, I will get the Shruthi synth working again, somehow

Well I took my synth to the old radio/electronics guy I know, he didn’t have much time to look at my synth, but tells me it might be the main chip which is shot as the LED’s are fully lit, and then only on occasions, sometimes I get no LED’s lit. Either way, I had to desolder the screen to get at the chips.

I spent a day trying to desolder the LCD, then finally lost my patience with it and took an angle grinder to the darn thing, that shifted it!

I have ordered a new LCD and headers from Amazon, to the tune of £3.90 which I thought was cheap!

I bought a new solder iron with a better tip and resolderd all the chip sockets and a few other areas that needed cleaning up, still stuck with a synth that sometimes lights all the LED’s and other times just sits there doing nothing.

I am going to need therapy after working on this synth!

Before I contact MI and buy a complete chip set, is there anything else I could try that might solve the problem?

did you try putiing in another 165? If that’s not it it could be your MCU is indeed broken.

I haven’t got any of those chips to hand, but I could get one and try it first I guess. I just had a phone call from a friend who said the crystals are quite sensitive and if it took a knock, it may give me similar issues to what I am experiencing now?

I don’t think they are that sensitive but if the crystal doesn’t work the MCU won’t start. Since your unit has briefly worked i still suspect a bad solder joint somewhere or else maybe you fried something by making an accidental short while fiddling with it looking for the other fault. (Also happened to me a few times)

Not too long ago I started self-sourcing most of my builds rather than buying complete kits. This has two downsides, it’s a major time-sink and it can take a long time to get stuff and consequently, finish the kit. On the upside, eventually you end up with a stable of parts and end up ordering less and less.

Thanks to various Hong Kong and Chinese suppliers (and Tayda), and the fact that ordering 20 of something (or 200) from overseas can cost the same as buying one of something locally, I usually have spares on hand for overcoming my own careless moves, like putting chips in backwards. Had smoke come out of a TL072 a couple of days ago, resulted in an actual crack in the chip. Cool!

Order a batch of 165s and 595s, just in case. Might take awhile to arrive but it’s cheap insurance.

Chip in backwards. It was a really nice but brief show. 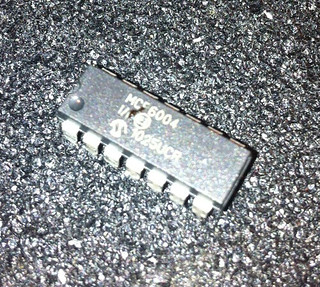