People seem to think that Akai only ever made samplers or sampling drum machines, but they produced a few synths too (not the recent ones).

I remember using one at a studio but I can’t remember which one it was. It may have been a VX600.

Just mentioning them since everyone talks about Roland, Korg or Moog

Let’s just say that some of them are synth-on-a-chip type synths that aren’t that special like the VX600/AX73. Then we have totally stellar stuff like the AX80.

The VX600 was pretty late for an analogue subtractive synth, 1988.

By then everyone was producing FM or ROMplers. But it was just around the time the 303 and 808s were getting put into use on Acid House music.

I had a AX-60 for a while and it was just meh. Generic CEM synth on a chip voices, filter was pretty aggressive and had slider controls but nothing that would make me want to keep it or buy again

So it seems to me that they largely made “me too” synths?

I can see at least one reason why they wouldn’t be collectable, there’s very few knobs on their synths.

yeah, that pretty much sums it up. I would say AX-80 was the only interesting one but

The AX80 is the one that stands out. It uses the CEM3372 as filter, same as Xpander/Matrix 12 and the Chroma Polaris. It isn’t very knobby, but all parameters are displayed on fantastic looking VFDs. 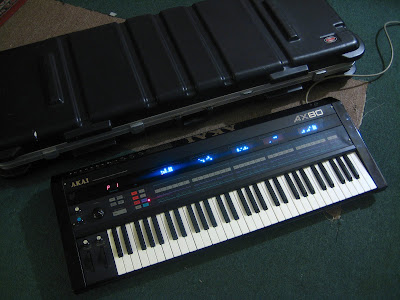 The AX60 looks nicer with all the sliders - imagine the luxury instrument that combines the AX60 slider goodness with the aristocratic AX80 VFDs for the non-slider things and sound engine… Mouthwatering.

Hearing them on youtube they sound fine to me. Others seem to say they’re just average, someone said “sleeper” as opposed to “keeper”.

How is it that two synths using the same chips can be so different? is it about the modulation or signal routing?

That, and chosen signal levels. Which opams are in the signal path will also color the sound a little. Plus, these guys were computer controlled so things like the voltage droop and update frequency of the sample and hold amps and the VFO/VCF autotuning also play a part. Stuff like proper hardware envelopes vs software envs that update once a week are also part of the result.

They are not the same, AX-60 is a VCO CEM3394 based synth where ax-80 has DCOs and 3372 based VCFs. The AX-60 is a cheapo competitor to the Junos (and falls well short sound wise) where the AX-80 seems like they actually put some effort into