On the knurled nuts for 3.5mm panel mounted sockets are two notches, presumably for a tool.

Does anyone know what this tool is called or where you can get one from? I’ve had a quick search and didn’t find one. 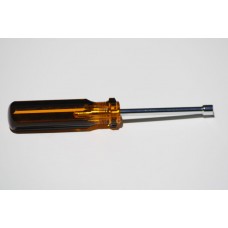 :http://erthenvar.com/store/eurodiy/35hardware/35knurleddriver
Got mine from Erthenvar, picture is the link to the product.

It seems to be called a knurled nut driver. Found one on ebay for £8.

there seem to be different sizes. make sure it works with the nuts you have.

+1 (and 2 for a well known DIYist) for the Earthenvar Tool. While you are at it get some Nuts - the cheapo ones HK suppliers ship tend to break sometimes

It’s pretty specific on what it does:

…. which proves, you just have lurk around here and the solution to every possible question comes along.

I’ve been carefully using pliers until now. But I’ve got a few more things to build, my ArdCore PCB arrived today and when the SID Guts kits are out I’ll be building some of those, so don’t want to risk damaging the panel

Have you heard anything about SID Guts availability ?

Kits in production I’m guessing. On Thonk there’s a “wish list” option where you will get an email when it is announced.

If you miss the kits then the PCB + panel option will appear a while after the kits are out (they want to sell a few kits first).

I’ll just be happy with a PCB and Panel, at least i’ll be able to build one. But the kits are a lot less hassle.

I think i’ve read that the kits will be limited too 100pc … So i think they could go pretty fast.

although I’d probably go for two now and then two when the PCB+Panel option is available.

I am curious about the sonic difference of both and i guess i will sell the one loosing the competition…or even not. Damned eurocrack !

6581, noisier, clickier, envelopes don’t close (not an issue on SID Guts as the envelopes aren’t used), filter further away from the specification, but can distort at times. 12v, runs hot and fail more often then 8580. Can play digi sounds due to a bug.

I thought you were discussing the sonic difference of the “nuts tightening tool”.

This would be the next step ;-

SIDStation used 6581R4s only and I owned one of those. It was still there. I used a noise gate to shut the darn thing up.